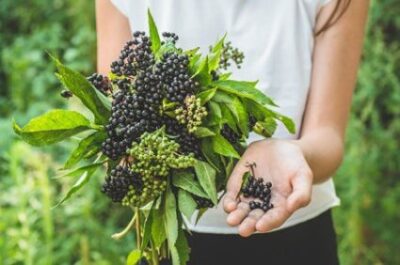 Elderberries grow deep purple berries. Because they are so common, you may have considered feeding them to your pet. However, most parts of the elderberry plant should not be fed to rabbits, and the fruit itself should only be consumed on occasion as a treat.

Most parts of the elderberry plant are toxic to rabbits due to the presence of cyanide-inducing substances in the plant. These include the stem, leaves, and seeds. Ripe elderberry fruit can be fed raw, but only in small amounts, because of the small but still considerable presence of cyanide. Elderberry fruit can be fully cooked to remove the cyanide-inducing substances and can be consumed freely. Elderberry flowers do not contain any harmful substances and can be fed to rabbits.

Owners should take care when feeding it to their rabbits. Despite this, elderberries have a lot of health benefits. While the stem and leaves should not be eaten by rabbits, ripe elderberry fruit and the elderflower can be prepared in many delicious and healthy ways.

Is Elderberry Toxic To Rabbits?

Also called elder, elderberries are common plants that have a lot of varieties and produce eye-catching fruits and flowers. Elderberry is also known for its health benefits and is sold as a health supplement.

In its raw form, however, elderberries are harmful to rabbits, except for the flowers. The leaves, branches, and fruit of the elderberry contain cyanogenic glycosides. These cyanogenic glycosides are substances that release cyanide when ingested, according to the Journal of the Science of Food and Agriculture.

How to Identify Elderberries

The elderberry plant is a plant that can grow on roadsides, scrubs, and hedgerows. It can be found all over the world, including Europe, North Africa, and West Asia. In the U.S., the two most common varieties are the black elderberry and the American black elderberry. Here are the poisonous parts of the elderberry:

Is Elderberry Fruit Harmful To Rabbits?

It is true that elderberry fruits are toxic. However, this does not mean that eating elderberries will kill your rabbit. In small enough amounts, ripe elderberries are safe to eat. In fact, wild cottontail rabbits have been known to eat elderberry plants when there are no other food sources in the area.

However, water isn’t often considered a toxic substance in the general sense of the word. In fact, this lack of awareness may be attributed to the commonality of the condition in sporting events.

Additionally, just because something is toxic doesn’t mean that any amount of contact with the plant will result in death. Some people can be more sensitive to a substance than others. Something that causes a headache in one person can mean unconsciousness in others.

This is all to say that if your rabbit ate raw elderberry fruit, chances are it is going to be fine. Ideally, these fruits should be fully ripe, with their seeds removed. Rabbits also shouldn’t be fed a large number of elderberries, as well as any other kind of berry.

When to Call Your Vet

If you do think that your rabbit has ingested too much elderberry, ingested a poisonous part of the elderberry, or is otherwise suffering from cyanide poisoning, contact your vet immediately. Cyanide is a fast-acting toxin that can quickly cause the deterioration of organs.

Rabbits are also at a higher risk of poisoning as they do not have the ability to vomit or regurgitate. Therefore, they are unable to get rid of the poison themselves.  The symptoms of poisoning in rabbits include the following:

If you notice these symptoms, no matter the cause, act immediately. Remove the possible cause of the poison, and put it out of reach. If you have other pets, separate the affected rabbit from other animals. Then, call your vet and ask for medical attention.

It’s also a good idea to prevent your rabbit from reaching any poisonous substances, poisonous plants or otherwise. Make sure to keep sources of poison and toxins away from your pet’s reach.

When Can Elderberries Be Eaten by Rabbits?

If you find yourself with a handful of elderberries, don’t throw them out just yet. Despite their toxicity, you can easily cook elderberries to make them safe to eat. Cooking them will remove the cyanide-inducing substances, making them safe for consumption in any amount.

Elderberries should only be eaten and prepared when ripe. Not all varieties are toxic when unripe, but with the large number of elderberry varieties, it is best to err on the side of caution. To determine if your elderberries are ripe, determine that the elderberry plant has these three traits:

Any of the other parts of the plant, save for the flower, should not be ingested in any way. Other parts have higher levels of cyanide-inducing substances, and are also high in lectin, which can cause stomach problems.

If you want a safe alternative to elderberries, try feeding your rabbit elderberry flowers. Elderberry flowers grow in flat-topped to rounded clusters, and are ¼ inch in size for each flower. They are star-shaped and are cream to white in color.

Granted, most elderberry varieties only bloom once a year. However, if you don’t mind the wait, elderberry flowers are completely safe to eat, without any preparation, and come with all the health benefits. Elderflowers are often made into wine, tea, and cordials.

While the presence of cyanide may be alarming, elderberry has many health benefits, making it a healthy snack for your pet rabbit. Throughout history, elderberry has been used as a way to treat illnesses, promote longevity, and even aid in complexion

In fact, the journal Phytochemistry determined that elderberries may have the ability to prevent H1N1 infections. Apart from this potential health benefit, here are some of the ways that elderberries can be healthy:

Rabbits are naturally leaf eaters, and this should be reflected in their diet. The green, leafy parts of vegetables should compose most of your rabbit’s diets, as they are high in fiber and low in calories.

When it comes to feeding your rabbits elderberries, it’s best to give your rabbit flowers or its ripened fruits. Even then, be sure to limit their berry intake and stick to giving elderberries to rabbits as a treat.

1 thought on “Can Rabbits Eat Elderberries?”