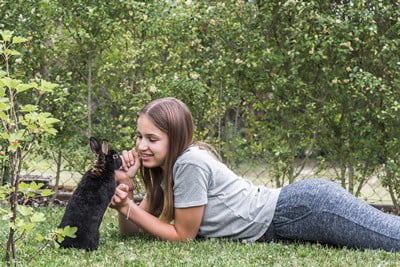 Tetanus is a disease that’s commonly associated with rabbit bites. Humans know to get regular tetanus shots. But what’s less considered is the impact that the condition can have on rabbits and whether they can pass it on to other animals. Can rabbits even get tetanus?

Like most mammals, rabbits can catch tetanus if an open wound comes into contact with infected soil, dust, or feces. While toxic bacteria can sit inside a rabbit’s intestines, the disease is rarely fatal to the animal. However, if a rabbit carries the bacteria, it could pass them onto another animal or person to catch after defecation. If tetanus is present, the rabbit will need to go through various treatments, including a full course of antibiotics to kill the bacteria.

Tetanus is a dangerous disease and can be unpleasant if left untreated. The warning signs are obvious. Knowing what they are can help you determine if your rabbit is affected, allowing you to get the right treatment promptly. However, as tetanus is so rare in rabbits, symptoms that seem like they’re caused by tetanus are most likely something else altogether.

Tetanus is a disease caused by bacteria getting into a wound. Though it’s usually contracted from tainted soil or manure, injuries caused by rabbit bites allow tetanus to get into the body. Only 30 people on average are diagnosed with tetanus in the U.S., so the risk to humans is low.

According to a journal in Science Direct, even though rabbits have been used as tetanus infection test subjects for over 100 years, the effects of tetanus in rabbits is not well studied.

However, it is known that rabbits can develop tetanus if an open wound or cut comes into contact with contaminated soil or animal feces. As described by Veterinary Partner, tetanus is a disease caused by a toxin secreted by a bacterium known as Clostridium tetani, which is one of many toxin-secreting Clostridia.

These bacteria grow where oxygen isn’t present; in a bite wound or puncture, for example. When the spores enter into the bloodstream through an injury, they spread into the nervous system. Here, the bacteria produce a toxin called tetanospasmin, a poison that blocks nerve signals from a rabbit’s spinal cord to the muscles.

The bacteria also live in soil, dust, and animal feces. Rabbits who regularly hop around in muddy or dirty areas are most prone to contracting tetanus, making it more common in wild rabbits than domestic.

However, tetanus is rarely fatal to rabbits as they have a natural resistance. The organism is commonly found in the intestines of affected animals, but it produces few adverse effects.

Tetanus is also not a disease that can be carried and passed on directly through animal-to-animal contact. Spores of tetanus bacteria get into the body through broken skin. The feces are the problem. If a carrier rabbit defecates, it allows the bacteria to spread, making the rabbit an unwitting carrier of the disease.

If another animal bites a rabbit, tetanus will only form if spores enter the bite wound. Tetanus does not come from the rabbit bite itself.

The incubation period for tetanus is 3 to 21 days, or 5 to 10 days from when the rabbit suffered the original wound. The symptoms caused by tetanus are deeply unpleasant and can leave a rabbit feeling extremely unwell. The main symptoms are as follows:

A rabbit with tetanus will first lose the ability to blink. To moisten its eyes, it will use its third eyelid to clear dirt and dust away. It will become sensitive to light and sound, and even the smallest noises will cause spasms or seizures.

In rare cases, rabbits with tetanus suffer from the risus sardonicus – otherwise known as the sardonic smile. This is when the facial muscles pull back into a sustained spasm that results in what looks like a sinister grin.

Risus sardonicus is more common in dogs, but it can strike rabbits that are severely affected by tetanus. It’s vital that you know what this is so that you can be prepared for it if it happens to your rabbit. The sardonic smile can be terrifying for all pet owners to witness.

In the most severe tetanus cases, rabbits will struggle to walk, sit, or stand as their muscles fail. During this stage, rabbits struggle to eat or drink and have difficulty breathing as their jaw muscles seize up. The process of the jaw muscles tightening is also what gives tetanus its nickname, ‘lockjaw.’ These symptoms are deadly unless treated immediately.

Rabbits with tetanus often suffer from localized muscle stiffness. The hind leg is the most commonly affected area, but no part of the body is safe. Similarly, if a rabbit suffers from a significant scratch or bite, that area is more prone to suffering from muscle stiffness. Sometimes this stiffness spreads; at other times, it remains fixed to one body part.

Unfortunately, there’s no real form of testing for tetanus. Instead, diagnosis is made based on the appearance of the rabbit and the history of the wound. If a veterinarian recognizes the symptoms to be caused by tetanus, they will treat the rabbit with a course of tetanus-killing treatments.

How To Treat Tetanus in Rabbits?

The most crucial step in treating tetanus is to kill the bacteria with antibiotics. Widely used penicillin is effective, as is clindamycin and metronidazole. After the first week of treatment, the symptoms should subside, while tetanus should clear up completely once your rabbit has finished the full course of antibiotics.

If your rabbit is in the more advanced tetanus stages with spasms and seizures, it will require extra attention. As well as a course of antibiotics to treat the bacterial infection, a rabbit may need sedation to control what the muscles are doing.

Muscle relaxants, tranquilizers, and sedatives are commonly used medications that can positively impact a rabbit’s rehabilitation.

Some medicines are effective in treating the sensitivity to noise and light. Keeping your rabbit in a dark, quiet room will reduce the animal’s stress and stimulation levels. In extreme cases, the rabbit’s eyes will need to be covered to speed up the process. Cotton wool can also be placed inside the rabbit’s ears to help lessen the impact of sound.

As reported by the MSD Veterinary Manual, active immunization can sometimes be achieved with tetanus toxoid. If a rabbit has not been immunized – which is not standard practice because of a rabbit’s natural resistance, it should be treated with 1,5000-2,000 IU or more of the tetanus antitoxin. This provides passive protection for as long as two weeks and can be repeated in 30 days.

Can Rabbits Die from Tetanus?

It’s very rare for a rabbit to die from tetanus. In most cases, the tetanus bacteria will lie dormant in a rabbit’s intestine before being defecated out of the body. Other animals, like livestock and horses, are more sensitive to tetanus and are more likely to die from it. Horses, in particular, are one of the most tetanus sensitive species in the world.

However, a rabbit in poor health or the later stages of its life will be more susceptible to succumbing to tetanus’s deadly symptoms. Also, because tetanus can inhibit the jaw’s normal function, it can prevent a rabbit from getting enough food and drink to sustain itself. Normal breathing functions are also affected, which can be fatal.

It’s often not the actual disease that kills the rabbit, but the symptoms. Fortunately, tetanus is treatable if caught early enough, meaning the chances of death from the disease are slim.

What is important to remember is that dogs and other pets should be kept away from your rabbit’s hutch, especially if your rabbit lives outside. If a rabbit’s infected feces becomes mixed with soil, tetanus can develop if another animal comes into contact with it.

How to Prevent Tetanus

While tetanus immunization isn’t typically given to rabbits because of their natural resistance to the disease, preventative measures can be taken instead.

If your rabbit suffers from any kind of wound, including bites or cuts, ensure it is throughout cleaned with an antiseptic solution. This will need to be done daily to prevent harmful bacteria from getting inside the body. If possible, cover the wound with a bandage or plaster for a few days to allow the injury to heal.

If the wound looks particularly nasty or painful, a course of antibiotics may be administered by your vet to kill any harmful bacteria. Pet owners must monitor any wounds carefully and seek out treatment by a vet if the wound gets worse.

Clean out your rabbit’s hutch or living area on a regular basis. If you have more than one rabbit, bacteria from infected feces can get inside a wound and cause tetanus. In this case, prevention is simple; sweep out your rabbit’s excrement daily to prevent your animals from coming into contact with harmful bacteria.

If you have more than one pet, ensure they are kept away from your rabbit at all times. An over-excited dog or nervous cat can cause damage if it’s allowed to get too close to your rabbit. To prevent bites or scratches from occurring, dedicate a space in your yard for your animals to live separately.

Similarly, if you have more than one rabbit and they don’t get along, it might be wise to separate them into different hutches where they can’t hurt each other.

While tetanus is a worrying disease, the chances that your rabbit will catch it are very slim. Rabbits have a natural resistance to the condition. While they can be carriers of the harmful bacteria, there is a more significant risk that you will catch tetanus yourself if bitten. Your rabbit’s living area must be kept clean at all times to minimize the chance of tetanus causing bacteria to be present. Doing so will keep you and all other pets safe.