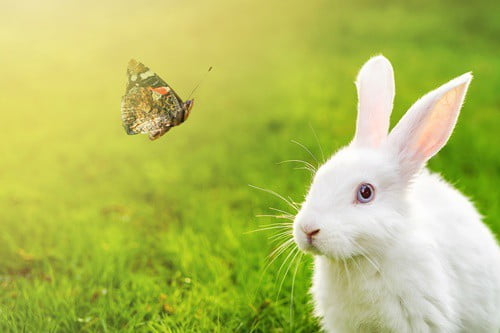 In the wild, rabbits and insects live together. As rabbits are herbivores, they do not feel the need to eat bugs. A rabbit’s primary dietary need (fiber) is taken care of through eating grass and hay.

Rabbits do not actively look for insects to eat. A rabbit may eat a bug by mistake as many insects eat the same food as rabbits. A bug sitting on a leaf, for example, could be consumed.

A rabbit may develop a taste for insects, but this is rare. If you own a rabbit that eats bugs, she is likely imitating the behavior of another animal. It’s unlikely that eating insects will make your rabbit sick, but it’s possible. Some bugs carry disease, and others have self-defense mechanisms.

Contents show
Do Rabbits Eat Insects?
What Kinds of Insects Do Rabbits Eat?
Are Rabbits Allowed to Eat Bugs?
My Rabbit Keeps Eating Bugs
How to Stop a Rabbit Eating Insects
Would a Rabbit Eat Fleas or Ticks?
My Rabbit Chases Flies and Moths
Would My Rabbit Try to Eat Bees or Wasps?
Would Eating Spiders (Arachnids) Make a Rabbit Sick?
Related Articles:

A rabbit will rarely willingly eat a bug. Rabbits are strict herbivores and sustain themselves on plant life. This means that creepy-crawlies have never been a part of a rabbit’s diet.

Rabbits need fiber to thrive and survive. This is obtained from greenery. Bugs and insects provide no such nutrition. Substantial insects, such as cockroaches or beetles, may offer a protein source. Rabbits do not need this source of nutrition, though.

Also, rabbits are a prey species with no predatory instincts. Rabbits do not have the skill or inclination to hunt down food. Insects move at speed. The idea of stalking and capturing food is too much effort for a rabbit.

This applies to wild rabbits just as much as domesticated pets. A wild rabbit will look for sustenance in open green spaces. If nothing is suitable, the rabbit will climb a tree and tackle low-hanging branches and leaves.

Despite this, it doesn’t mean that a rabbit will never eat an insect. Bugs and rabbits often feed on the same food sources. A rabbit could be eating a plant and accidentally ingest a bug that was attached.

Let’s also remember that rabbits are curious animals. If your pet sees something unfamiliar, she may want to investigate it further. Investigating through the mouth is possible.

What Kinds of Insects Do Rabbits Eat?

A rabbit may eat any living thing in error. This could be something tiny, such as an aphid. If she’s hungry and not paying attention, your rabbit may eat something larger. A caterpillar on a leaf may become an unplanned snack.

It’s also possible that a rabbit will inadvertently eat crickets. The largest crickets in the world grow to around two inches in length. That’s likely big enough for a rabbit to notice. Smaller bugs, though, can easily be accidentally consumed.

Ants are another insect that your rabbit may eat. Ants live in mounds underground, and the grass. Rabbits dwell underground in warrens. Even a domesticated rabbit has an instinct to dig and burrow.

If your rabbit stops for a snack, she may eat ants in the process. Pound for pound, ant bites are among the most painful attacks. As humans, we often barely notice an ant bite. Rabbits are much smaller and have low pain thresholds. Your pet will feel a bite from an ant.

If you have a bug infestation in your home, don’t rely on your rabbit to sort it out. Your pet will be disinterested. Call an exterminator. Just make sure that any remedies used to clear an infestation are safe for your rabbit. Toxic chemicals can be deadlier than any insect.

Are Rabbits Allowed to Eat Bugs?

Rabbits shouldn’t eat bugs, but they won’t typically be interested anyway. Most insects are so small that your rabbit will not even notice their presence. No, rabbits should eat insects. Larger bugs can be dangerous, as can those with self-defense properties.

Imagine that your rabbit corners a cockroach. If the bug is deemed a threat, your rabbit will defend herself. This may involve biting, and maybe even eating, the bug. Cockroaches carry disease. Rabbits are not famed for the strength of their immune system.

Cockroaches have a tough exterior shell. Wings are housed within this shell. The same applies to beetles. Rabbits have tough teeth, but small throats. It’s possible for your pet to choke on the bug.

There’s the delicacy of rabbit digestion. Tiny bugs will pass through without trouble. Larger insects will need to be digested. Your rabbit’s gut will struggle to do this. It may cause a deadly blockage.

If your rabbit has developed a habit of eating insects, it’s understandable that you’re concerned. This suggests that your pet has picked up some uncharacteristic carnivorous tendencies.

If your rabbit is showing no signs of ill health, she’s most likely fine. All the same, have her checked out. Ensure that your pet is not hiding any gastric issues or discomfort. Rabbits do not like to reveal pain unless strictly necessary.

Learn why your rabbit is eating bugs. If you have other pets, she is likely imitating. Cats and dogs both have prey drives, and will stalk and eat insects. Your rabbit may think this looks like fun.

How to Stop a Rabbit Eating Insects

If you want to put a stop to this behavior, you’ll have to use training techniques. Treat bugs the same way you would electrical cables, or anything else unsuitable for rabbits.

Of course, your pet may not take kindly to this. Rabbits are strong-willed. She may think that you’re just trying to ruin her fun. In this instance, avoidance is all you can do.

Move your rabbit indoors, and set up an outside exercise pen in a bug-free zone. There is no way to be certain this will work. Insects get everywhere, including inside the house.

Would a Rabbit Eat Fleas or Ticks?

Parasites are among the most common examples of bugs that rabbits will eat. This is especially likely if two bonded rabbits share a hutch. In the process of grooming, ticks will be discovered.

If a rabbit finds a tick on her mate, she won’t leave it be. She’ll do everything in her power to remove it. This will likely involve biting. To be sure it’s gone, the rabbit may then eat the tick afterward.

This is inadvisable as there is no way of knowing where that tick has been. If it previously fed upon another animal with diseased blood, it could make a rabbit sick.

Fleas are equally problematic, and could be eaten in error. If your rabbit lives alone, she may swallow fleas while biting her fur to relieve itching. Fleas carry tapeworm larvae. By eating fleas, your rabbit opens herself up to internal parasites. Never let rabbits resolve parasitic infestations on their own.

My Rabbit Chases Flies and Moths

Flying insects can be a source of fascination for rabbits. This is due to the noise they make. Rabbits have excellent hearing. The drone of a fly or beating wings of a moth will get your pet’s attention.

Flying insects tend to stick to a common path. Flies and moths may fly in circles around your rabbit’s head. This may provoke a play reaction. Your pet will try to knock the bug out of the air, or even catch it in her mouth.

In the case of flies, this is bad news. Like cockroaches, flies are disease magnets. In fact, any sign of a fly in your rabbit’s hutch should be taken seriously. The presence of flies can lead to flystrike, a deadly medical condition. Medirabbit discusses flystrike in detail.

In the hot summer months, keep your rabbit clean. If you see any sign of flies congregating around your pet, take immediate action.

Moths can end up in rabbit hay, though they don’t eat it. Moths like to eat seeds and grain. If the hay was bagged from a source close to these foods, moths may accidentally be captured. Moths could be an annoyance, but are not toxic.

Would My Rabbit Try to Eat Bees or Wasps?

The most dangerous flying insects to a rabbit are bees and wasps. Colonies of bees or wasps may attempt to build a hive in a rabbit hutch. Your rabbit is unlikely to eat a bee or wasp. Your pet is more likely to be frightened. This, of course, will cause her stress.

Clear a rabbit hutch regularly to avoid attracting bees and wasps. Sweet foods mustn’t be left lying around. Rabbits love sweets, but the two species may fight over leftover food.

If you do find that bees or wasps have set up home in your rabbit’s hutch, remove your pet immediately. Temporarily rehome her and deal with the infestation.

Spiders and rabbits will often cross paths. A spider is likely to spin webs in the corner of a rabbit’s hutch. If your pet doesn’t mind this, you should encourage the behavior. Spiders catch and eat flies. This keeps flies off your rabbit.

Of course, there are some notes of caution that should be sounded. Poisonous spiders are not commonplace in the USA, but they do exist. A rabbit can be hurt or killed by a poisonous spider bite.

Venombyte lists the spiders deemed venomous in America. This information focuses on humans. A rabbit is smaller and weaker, and can be felled by fewer toxins.

Most spiders will not bite a rabbit unless provoked. The spider will be more afraid of the rabbit than vice versa. If your rabbit isn’t interested in eating the spider, they can live in harmony.

Beware of other arachnids, such as scorpions. Aggressive scorpions could cause harm to a rabbit. Pincers and tails stings are both painful and distressing for rabbits.

Discourage your pet from eating insects. It’s unlikely to do her harm, but there are exceptions. There are no health benefits for a rabbit that comes from eating bugs.