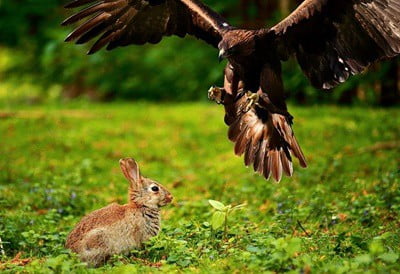 Many owners of small pets wonder if they can keep rabbits and birds in the same home safely together. The answer is a little complicated, and depends on both the type of bird and its unique personality.

Birds and rabbits can live peacefully together in a single home. No matter how big the aviary is, birds and rabbits should never share an enclosure. This risks cross-contamination for inter-species diseases, fungal infections, and bacteria. Additionally, rabbits and birds cannot eat the same food. Keeping the enclosures in separate rooms and supervising interactions are two key parts of owning rabbits and bird.

Certain species of birds are more suitable for living with rabbits. Friendly, quiet birds, like budgies and lorikeets, are ideal. Remember that rabbits are prey animals that startle easy, and noisy birds will cause stress.

Can Birds And Rabbits Live Together?

Domestic birds and rabbits won’t have a buddy-buddy relationship like you would see between two rabbits. They can peacefully coexist, depending on the individuals. Each rabbit and bird has its own personality. One rabbit may be completely unbothered by the presence of small finches or budgies, another may be petrified of them.

The same can be said for birds as well. One bird may ignore a rabbit wandering around on the ground, whereas another will act territorially. Birds are known for diving and swooping at any potential threats to their territory.

Ornithological Advances states that territorial behavior, like swooping and mobbing, increases during breeding season. A bonded pair of birds is more likely to act territorially by swooping at a rabbit. Just as a particularly territorial bird may swoop at a rabbit regardless of what season it is.

In the home, it is best to keep birds and rabbits confined to separate areas of the house. This is especially true when unsupervised, and even if the animals don’t have a prior history of antagonistic behavior. Not only does this separation ensure the animals can’t injure each other, it prevents cross-contamination of food and fecal matter.

Isolating the animals from each other also muffles the noise of the birds. This prevents the rabbits from being stressed out by chatty birds.

Can Birds And Rabbits Live In The Same Enclosure?

Birds and rabbits should never be kept in the same enclosure. The size of the enclosure or aviary is irrelevant, as it isn’t square footage that matters here. It’s cross-contamination.

Rabbits are strict herbivores. Very few birds are, meaning that bird food mixes will often contain matter that rabbits can’t eat. This includes certain grains, seeds, insects, and corn. Ingesting this can cause a wealth of issues that affect the rabbit’s health. This includes impaction and, as The Veterinary Nurse notes, gastrointestinal stasis.

Birds are very messy eaters. One will likely leave a scattering of bird food when allowed to roam outside of a cage during the day. A rabbit may ingest this food. In return, a bird may peck around in a rabbit’s food dish. Fresh vegetables won’t be a worry (they are actually good for some birds, like parrots), but rabbit pellets are a different story.

There is also the concern of droppings from both animals contaminating food or water. Not only does this make the water unsafe to drink due to fecal bacteria, but it can transfer parasites, diseases, and viruses. Bird and rabbits cannot share an enclosure.

Can Rabbits Get Sick from Birds?

Rabbits and birds are vulnerable to certain parasites, fungi, bacteria, viruses, and mites. Some are transferrable between the two species.

Giardiasis is a condition that is caused by the Giardia parasite. It is thought that one subspecies of this parasite, Giardia duodenalis, is naturally found in the rabbit’s intestines. This means that birds that ingest contaminated rabbit droppings could suffer giardiasis, which can be fatal. This condition is very rare in rabbits. The same cannot be said for birds. Giardia is also transferrable to humans.

Another disease to watch for is Tularemia. This is a rare disease caused by the Francisella tularensis bacterium, and is also called rabbit fever. Although primarily affecting mammals, it is transferable to birds. Infection can occur very easily, such as through ingesting contaminated food or water, exposure through wounds and bites, and inhalation through airborne bacteria.

On top of parasites and bacterium, fungal infections can also be transferred between rabbits and birds. One of which is aspergillosis, a fungal infection that grows in the lungs and causes respiratory infections. Veterinary Pathology notes that pulmonary aspergillosis has been diagnosed in almost every species of domestic animal.

It is also worth noting that while rabbits can be litter trained, it isn’t quite so simple with birds. Some domestic birds are quite intelligent and can be house trained. This cannot be said for all types of domestic bird however.

Are Rabbits Scared of Birds?

Birds of prey are one of a rabbit’s natural predators. A rabbit will consider anything larger than a crow as a potential threat, especially the dwarf rabbit varieties. Usually, domestic birds are not those found in the birds of prey family – although falconers are an exception. In spite of this, domestic birds can still bear a resemblance to their predatory cousins.

A rabbit may see the larger birds, such as parrots, as a predator. As such, it may be quite frightened. Stress causes all sorts of issues with rabbits. Small birds, like finches and budgies, have a smaller risk of appearing like the hawks, falcons, and eagles that prey on wild rabbits.

Birds can also be quite noisy. You may consider a cockatoo’s nattering amusing or sweet. Your rabbit may not. Rabbits are one of the animals that truly require calm, quiet environments to feel safe and comfortable. A bird acting normally will be making a lot of noise that can be anxiety inducing for the rabbit.

What Birds Will Attack Rabbits?

Few domestic birds will attack rabbits out of the desire to hunt and eat. Even larger parrots, like African Greys and Blue Macaws, won’t do this. Parrots eat largely vegetation, fruits, seeds, and nuts, and are foragers and not hunters.

As we mentioned before, some birds will swoop at a rabbit if the bird is territorial or nesting. This is defensive behavior, not predatory behavior. Rarely will it result in a true attack involving biting or clawing.

Some birds may strike when cornered and afraid. If a bird with clipped wings is cornered by a rabbit, it may screech, flap its wings, or bite the rabbit. This is why any interactions should be supervised. Any bird may do this, it is not restrictive to certain species.

Rabbits may not look dangerous, but they can defend themselves when pressured. A rabbit’s instinct will always be to flee and hide. If backed into a corner, a rabbit will bite, kick, and claw at its foes.

Small birds can easily be killed by a rabbit. Although a rabbit wouldn’t intentionally attack a small bird, a startled rabbit could try to defend itself by biting or kicking. A rabbit’s teeth can easily cause lethal damage to a small bird. A rabbit’s kicks are quite powerful too, which can do serious damage to the delicate skeletal structure of many domestic birds.

Even medium-sized or larger birds can be seriously hurt by a rabbit. Even if the injury isn’t initially fatal, surgery and treatment of small animals, like birds, usually requires the attention of a specialist. This can cost hundreds, if not thousands, and may result in permanent injury.

Conversely, should the bird fight back, its beak and talons can hurt the rabbit. This is especially troublesome when it comes to the sensitive eyes and ears of the rabbit. A bite to the neck from a larger bird could potentially hit an artery too, which is lethal.

Can Rabbits And Budgies Live Together?

Budgies, also called parakeets, are one of the most popular birds to keep as pets. Their beautiful feathers, friendly and docile nature, and gentle aptitude make them ideal companions. Budgies are also one of the smaller domestic birds that can be handled. They are also quieter.

Being calmer, quieter, and gentle, budgies are a good option for those that already own rabbits. While each animal will still need its own enclosure, budgies and rabbits can exist peacefully together. Free roaming hours will still need to be supervised. And the rabbit may need an adjustment period as it becomes accustomed to the budgie.

Can Rabbits And Parrots Live Together?

All parrots that are considered good pets and raised correctly can live in the same house as a rabbit. It is best to avoid noisy parrots, like Quakers, Macaws, and Caiques, as their natural chatterbox nature will cause the rabbit to stress.

Cockatiels are suitable for rabbit households. Although cockatiels do enjoy chattering, they have very sweet vocalizations that are song-like.

As said, certain types of parrot are naturally very vocal. It really comes down to the individual bird though. Some individuals may be quite shy and quiet, even though they are of a vocal species. If you already own a parrot and know it to be calm and quiet, then adding a rabbit to the family shouldn’t be a problem.