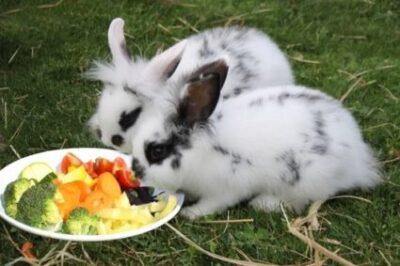 Rabbits like to eat a lot, and that leads to concerns that your pet rabbit could die due to overeating. Because rabbits are herbivores, they spend most of their time foraging and grazing. So, rabbits should be provided with an unlimited amount of grass hay and a small handful of vegetables daily.

Rabbits have sensitive digestive systems. Overeating can cause obesity and digestive problems which could lead to death. A rabbit’s diet should consist of 85% grass hay, such as meadow, timothy, or orchard hay. The rest of the diet should be fresh vegetables, fruit, and pellets.

Rabbits will overeat if given a chance. We’ll look more closely at which foods rabbits eat to excess, and what happens when they do. We’ll also advise on how much you should feed your rabbit per day.

Can You Overfeed a Rabbit?

Rabbits are natural grazers. They will always overeat if they have the opportunity to do so. They’re also prone to picking the highest-calorie foods and leaving the healthier ones, if given a choice.

It all comes down to evolutionary adaptation. Rabbits have evolved to subsist on a diet of grass, which is highly nutritious but low in calories.

Wild rabbits would have to eat grass almost all day long to consume enough calories to live on. Therefore, when they can find a more nutrient-dense food source, they take advantage. They forage and seek out the most high-calorie greens.

House rabbits should primarily eat hay, with some leafy vegetables offered now and then. But if they have the opportunity, they will overeat on vegetables, fruits, pellets, and anything else.

What Happens If Rabbits Eat Too Much?

If rabbits are given the opportunity to overeat, various things could happen. These are the most common problems that will arise:

Can You Overfeed a Rabbit Lettuce?

When you imagine “rabbit food,” lettuce springs to mind. But what many owners don’t realize is that certain kinds of lettuce are bad for rabbits.

Rabbits should only eat dark green lettuce, such as romaine lettuce. Light-colored lettuce is high in water content and has little nutritional value.

Some lettuces, such as iceberg, also contain a compound called lactucarium which is poisonous to rabbits. If you’re uncertain which kinds are safe, it’s best to stay away from lettuce altogether.

Can Rabbits Eat Too Much Cardboard?

Rabbits love to shred, chew on, and eat cardboard. It’s great for helping to grind down their teeth, and it provides mental stimulation.

Cardboard contains a high amount of cellulose (plant fiber), which is why rabbits recognize it as a food source. It won’t do your rabbit any harm, as long as the cardboard doesn’t have any ink or a plastic coating. However, they should not be filling up on cardboard and turning their nose up at hay.

Keep an eye on your rabbit’s consumption and toilet habits. If anything looks amiss, remove the cardboard and take your rabbit to a vet.

Can Rabbits Eat Too Much Hay?

In the wild, rabbits spend the majority of their waking life eating grass. They make their homes in meadows and grasslands, with unlimited access to their primary food source.

Domestic rabbits, however, should be kept indoors most of the time. While you can grow grass for your rabbit to eat, hay is the easier alternative. It provides all the same nutritional benefits, and can be bought in bulk. Always provide unlimited grass hay for your rabbits to eat. The most popular types include:

You can also feed rabbits oat, wheat, and barley hay. Alfalfa hay should be avoided for rabbits older than 6 months. There’s no such thing as a rabbit eating too much hay.

Rabbits’ teeth grow constantly. Grazing on hay helps to keep their teeth short. If your rabbit isn’t eating enough hay, it’ll have to have its teeth filed down by a veterinarian. Not to mention, hay provides valuable dietary fiber. It’s essential for keeping their digestive system working correctly. A lack of hay can result in the dreaded GI stasis.

How Much Should I Feed My Rabbit?

Rabbits of every age should have access to unlimited grass hay. If your rabbit is under 1 year old, you can also offer alfalfa hay. It’s too high in protein for older rabbits, and it can lead to excessive weight gain.

Hay should make up 85% of a rabbit’s diet. On average, your rabbit should eat a portion of hay the same size as its body per day. The rest of a rabbit’s diet (around 15%) should consist of fresh vegetables and occasional fruits:

Give your rabbit a portion of fresh veg about twice the size of its head per day. This should consist of at least three different types of greens. Introduce new greens slowly, to avoid upsetting your rabbit’s stomach.

A typical rabbit feeding schedule consists of offering one fresh meal in the morning, and one at night. Avoid feeding your rabbit vast amounts of brassica vegetables, such as cabbage, cauliflower, broccoli, and kale. They should be limited to one serving per week.

Should I Feed My Rabbit Pellets?

Rabbit food pellets are made from dried, processed, and compacted hay. They are not a necessary part of your rabbit’s diet. Rabbits can happily live on just hay and fresh vegetables. However, some rabbits may not eat enough hay. If you’re concerned that your rabbit isn’t getting enough fiber, you can supplement its diet with pellets.

Look for a good-quality pellet, made primarily from timothy grass meal. It should contain no more than 14% protein, and no animal fat. Make sure there are no calorie-dense nuts, seeds, corn or colored pieces mixed in. A good brand is Oxbow Essentials Adult Rabbit Food.

For a 5-7lb rabbit, give them a ¼ cup of pellets per day. An 8-10lb rabbit can have a ½ cup, and an 11-15lb rabbit can tolerate ¾ cup daily. Any more than this can result in health problems, such as weight gain and obesity.

Why Is My Rabbit Suddenly Eating More?

Rabbits eat so much that new owners are often surprised by just how greedy they are. Your bun will spend most of the morning and evening chewing on hay. Even while resting, it’ll occasionally wake up to eat some hay, and then go back to sleep. Most rabbits will immediately gobble up any vegetables, fruits, and pellets that you offer to them.

If your rabbit is suddenly eating more than usual, you probably don’t have to worry. It’s normal for rabbits’ appetites to get bigger over time. Rabbits develop larger appetites as they age and grow.

They also eat more when molting, which happens 2-3 times per year. Rabbits will even eat more if they start exercising more than usual. Pregnant rabbits also consume more food than they usually would.

As long as you don’t overfeed your rabbit, or introduce new foods too quickly, it’ll be fine. You should be concerned if your rabbit stops eating. This could be a sign of gastrointestinal stasis, which is life-threatening.  No appetite is almost always a sign of a health problem.

1 thought on “Can a Rabbit Die from Eating Too Much? (Overweight Rabbits)”