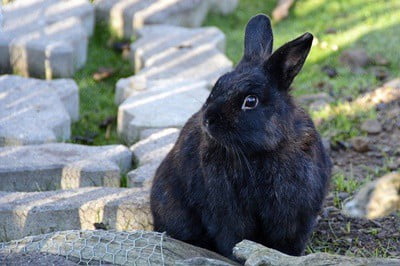 Certain pets will run straight over to their owners when their name is called, and often do so with a cheery gusto. Other pets, like rabbits, are much harder to read and understand. So much so, that some owners may wonder if a rabbit recognizes its own name.

Pet rabbits do know their own names. Rabbits can learn to associate sounds with specific commands over time. This includes coming to an owner when you call its name. Rewarding a rabbit with treats, petting, or other consistent positive reinforcements will help it retain these commands in its memory.

Rabbits are intelligent animals that can detect a wide variety of human words and phrases. With patience, you can also teach your pet rabbit some commands and tricks.

How Do Rabbits Recognize Sounds?

A rabbit’s long ear length can amplify any sounds that it picks up from up to 2 miles away. It then funnels these amplified sound waves down to its ear canal, which gives it a keen sense of hearing. Because rabbits are prey animals in the wild, this sharp sense of hearing is crucial to their survival.

Rabbits can also turn or tilt their ears 270 degrees to help them better pinpoint the source of any particular noise. Each ear can move independently from the other to listen out for multiple noises at once.

The position of their ears can inform you how the rabbit is feeling. If a rabbit’s ears are facing forward, it might hear a noise that makes it feel happy or curious. If its ears are pressed down against their body, it may hear something that annoys it or makes it feel sleepy, like soft music.

According to UC Irvine, rabbits will associate sounds with a certain behavior or response. This is known as classical conditioning training. Consistently playing a specific noise or tone before performing an action will teach a rabbit to expect a specific response whenever it hears said noise or tone.

How Many Words Can Rabbits Learn?

Rabbits can be taught many different commands. Try to keep these commands short and simple so it is easier for the rabbit to learn and remember. Common words and phrases rabbits can learn include:

Rabbits will also respond to your tone of voice. Most commands should be said in a soothing, gentle voice so you do not scare the rabbit away.

Laboratory Animals states that rabbits can pick up low sounds between 2 to 16 kHz and that they can detect noises up to 42 kHz, which includes pitches far higher than their human companions can hear.

This means that a rabbit’s hearing is very sensitive, so an owner should never yell or scream at it if it exhibits bad behavior. If a rabbit is being disobedient, you can use a sharper or stern tone around it if needed.

Always try to say these commands the same way each time to better reinforce them into your rabbit’s memory. Do not say a command gently one time and then stern another time. Without a consistent tone, any command you want your rabbit to learn will sound just as garbled and confusing as the rest of human speech.

Adding gestures to these commands may also help. For instance, patting the couch cushion next to you and saying “Up!” will signal to your rabbit that it is okay to hop up on the sofa next to you. You must also keep these gestures consistent so as to not further confuse your rabbit.

Do Rabbits Respond to Names?

According to The Humane Society for Science and Policy, rabbits will not always come when called. This is not to say that rabbits do not know their own names. This failure to come over is a more deliberate display of disobedience, especially if a rabbit’s ears flick back towards you when you call its name but it still does not move a muscle.

Rabbits are far more mischievous than they are given credit for. However, rabbits are not being disobedient to spite you. It may simply want to continue to explore its environment or relax a little more. That being said, rabbits do respond to being called most of the time. Whether a rabbit feels like actually listening to its owner is another matter entirely.

It is important that when you first teach a rabbit its name that you stick to a single name to call it by. Some owners may give their rabbits nicknames (shortening “Snowball” to “Snowy” or simply “Snow”, for example), and it can be confusing for a new rabbit to know what to respond to.

It is best to save calling a rabbit by a nickname for when it is more comfortable around you and already seems to know its own name.

How Fast Do Rabbits Learn Their Names?

Teaching a rabbit its own name and to come when that name is called can prove to be a long and arduous process. Rabbits do not respond well to aggression or anger, so patience is key.

The first thing you need to do is to teach your new pet rabbit to trust that you are not a threat. Rabbits are cautious animals, and it may take them some time before they become acclimated to their new home.

This is a process called socialization, which is extremely important for a young rabbit’s development. Despite their quiet natures, rabbits tend to be social creatures and like getting to know who they are going to be living with for the rest of their lives. Young rabbits socialized around a human family will learn to feel more comfortable around other humans, even if that human is a stranger to them.

It may also help to let your rabbit out to exercise and play during the times of the day it will feel most energized. According to the University of Florida College of Veterinary Medicine, rabbits are crepuscular animals. This means that they are most active at dawn and at dusk. A rabbit that is allowed to play when it feels its best may be more inclined to explore its home and get to know you.

Still, it is important to note that complete human socialization will not occur within a day or two. To aid this process, it may be a good idea to try a little classical conditioning training of your own:

Practice this several times a day until the rabbit starts to approach you without any hesitation. A rabbit must be comfortable enough with you and its environment before you can teach it anything else. From there, you can start to teach your rabbit its name and to come when called.

How To Teach a Rabbit Its Name

After the grueling process of getting your rabbit to trust you, you may find that it is much easier to teach them new commands. You can teach your pet rabbit its name in much the same way you would teach it to approach you:

Once your rabbit finds this distance easy to cover, try moving further back (2 feet or more) and start this process over again. It may help to hold out a treat towards your rabbit to entice it to follow you.

If your rabbit refuses to approach despite smelling a treat, carefully move back to the initial short distance (1 foot or less) and try again. Keep going further and further away until your pet rabbit learns to come when called, no matter how far away you are from it.

Once your rabbit learns its name, you can start to move onto other simple commands. The length of time it takes for your rabbit to master it will depend on many different factors, including the type of positive reinforcement (or reward) you choose to give it and the command’s complexity. Simplicity as well as consistency in tone and reward is key in rabbit training.

You can also teach your rabbit tricks. For instance, you can teach a rabbit to spin in place or ring a small bell in exchange for a treat. It is best to keep these tricks simple and to consistently reinforce good behavior with a reward of some sort, be that a treat, praise, or a petting session.

Do Rabbits Remember Their Names?

Fortunately, rabbits have excellent long-term memories. According to National Institutes of Neurological Disorders and Stroke, rabbits can recall specific responses for up to 1 year after the initial acquisition, or first bout of association training.

Researchers also found that even if a rabbit has not been exposed to a certain response anywhere between 6 to 9 months, it can still recall the desired response faster after reacquisition than when it first learned how to react to the said response. This may prove that a rabbit’s implicit memory, or the ability to unconsciously remember past events without thinking too much about them, is substantial as well.

All this basically means that your rabbit is able to remember its own name and other commands or tricks that you teach it. However, that does not mean you should stop practicing these commands and tricks with your rabbit entirely. Constant practice is good for a rabbit’s memory retention.

This is also why positive reinforcement is so important in the teaching process and beyond. You must teach your rabbit that coming to you when called will result in a reward of some sort, be that a fruity treat or a laid-back petting session on your lap.

Keep in mind that giving slivers of fruit or other sweet treats is fine when you first teach a rabbit its name or any other commands or tricks. However, you should start to wean away from the need for sugary treats as your rabbit shows a better understanding of your commands. Too much sugar can cause obesity, after all. Alternating between petting, verbal praise, and toys as rewards will be better for its health in the long run.