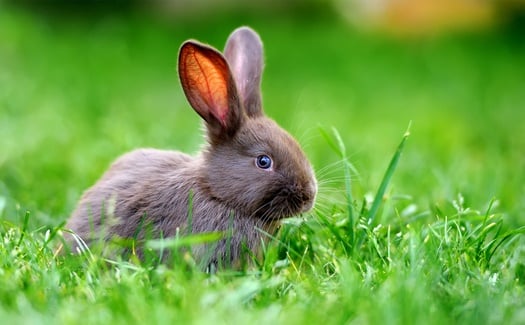 Perhaps your bunny has escaped from your garden while playing, or you’re just wondering if your bunny would be happier living in the wild. Sadly, pet rabbits won’t be able to survive in the wild.

Pet rabbits lack basic survival skills and don’t understand the dangers of predators. They’ll be susceptible to sickness and disease. They risk being run over, and may be culled as pests.

If your rabbit escapes the home, try to get them to return home. You may be surprised at their homing instincts. If you’re no longer able to care for a bunny, never release them into the wild. Instead, look into adoption or rehoming. This is the only humane option.

Contents show
Is Releasing Domestic Rabbits into the Wild Legal?
Can Pet Rabbits Live in the Wild?
I Cannot Care for My Rabbit Any Longer
My Rabbit Escaped, Will it Survive?
Pet Rabbits Cannot Escape Wild Predators
Pet Rabbits Are Culled as Pests
Pet Rabbits Have No Traffic Sense
Pet Rabbits Do Not Understand Weather
Pet Rabbits Need the Help of a Vet to Remain Healthy
How to Prevent a Pet Rabbit from Escaping
How Can I Tell if a Rabbit is Wild or Domesticated?
Related Articles:

Is Releasing Domestic Rabbits into the Wild Legal?

If you release a pet rabbit to run free, you may be breaking the law. This depends on the state that you live in. Different territories have different legislation on this subject.

The main reason is population control. If unspayed and unneutered rabbits encounter each other, they’ll likely breed. If they find an area with food and few predators, they’ll quickly colonize.

This can have a significant impact on the local ecosystem. These rabbits will feast upon local greenery, and grow in numbers. This can attract other predators, and permanently alter a wildlife population.

There will also be financial implications. Local authorities will need to control the population. Sick rabbits will also be treated to prevent disease outbreaks. It’s usually the taxpayer that receives the bill for this work.

Even if you find it’s legal to release your rabbit into the wild, it remains inadvisable. Pet rabbits and wild rabbits are entirely different in almost every way.

Can Pet Rabbits Live in the Wild?

Rabbits that are born in captivity are not equipped to run free. They lack the know-how necessary to flourish in nature. Releasing a pet rabbit into the wild is essentially sentencing them to death.

There are two core instincts that domesticated rabbits will carry over into the wild. They will instinctively dig a burrow to hide and sleep in. They’ll also behave like a prey species, avoiding any potential predators wherever possible.

Sadly, this is where the similarities end. You would not last long living in a cave like your ancestors. A rabbit will be just as incapable of transitioning from the pampered life of a pet.

The average house rabbit can be expected to live for around eight years. This drops to just a year for wild bunnies. A rabbit that’s unequipped for life in the wild will rarely last this long.

I Cannot Care for My Rabbit Any Longer

Pet rabbits are sometimes set free because their owners can no longer care for them. This could be due to the arrival of a new pet or child, or behavioral problems.

Instead of releasing a rabbit into the wild, get it rehomed. If a friend or family member cannot take the bunny, find a shelter. The House Rabbit Society lists such organizations by state.

Allow us to reiterate; domesticated rabbits are bred to be pets. They do not ‘belong’ in the wild, running free. Releasing a domesticated rabbit into the wild is not doing them a favor. It’s sentencing them to a frightening and painful demise.

My Rabbit Escaped, Will it Survive?

Unfortunately, it’s unlikely that a pet rabbit will last long in the wild. They will fall foul of any number of issues that do not plague domesticated bunnies. These include:

The rabbit breeds kept as pets in the United States have been bred for this purpose. Often, their genus is imported from Europe. This means they lack the instincts required to survive, let along thrive, outside the home.

If your rabbit escapes, do whatever you can to get them back sooner rather than later. They may think that the great outdoors looks like a great adventure at first. They quickly learn the hard way that this is not the case.

The most significant risk of pet rabbits in the wild is predators. A domesticated bunny is essentially a sitting duck for opportunistic wildlife. They do not understand the danger that they’re in.

Start with their feeding schedule. A pet rabbit knows that they will always have a steady supply of food when they want it. This is not the case in the wild. Without pellets, fresh hay and fruit and vegetables, rabbits need to graze on grass all day.

If the rabbit is lucky, they’ll be able to do this. Unfortunately, most territories host predators licking their lips. Domesticated rabbits are blissfully unaware of this. They lack the vigilance to look out for predators constantly.

Domesticated rabbits lack the camouflaging qualities of their wild counterparts. Wild rabbits naturally change fur color with the seasons. Their fur lightens in the winter, to blend into the snow.

Pet rabbits, on the other hands, have coats specifically bred for aesthetic appeal. Looking pretty will not dazzle a wild predator. It just makes the rabbit stand out, and easy to stalk.

Even if the rabbit does notice a predator, their survival instincts will be dulled. They will likely lack the reflexes required to make a quick getaway. The fact that domesticated bunnies are typically heavier than wild rabbits doesn’t help.

Finally, where will the rabbit run and hide? If they have built a warren, they may have somewhere to flee. What’s more likely is that they’ll panic, and be picked off.

Nature can be harsh, and it’s often Darwinian. Domesticated rabbits left to fend for themselves are rarely the fittest, in any circumstance. This makes it unlikely that they’ll survive long.

Pet Rabbits Are Culled as Pests

A domesticated rabbit will have picked up certain habits and taste preferences. This will likely include fresh fruit and vegetables. A bunny that knows how tasty such foods are will hunt them down.

This will naturally lead the rabbit to farms and vegetable patches. If they start to eat the produce of such a location, it won’t go unnoticed. Many landowners will not take kindly to this, and take action.

It’s likely that a rabbit will be shot or poisoned if a farmer feels they are destroying their livelihood. That’s not a pleasant way for any animal to die.

The rabbit may even invite their own demise. If being released has not dented their trust, they may approach humans. As far as the bunny is concerned, the nice person will offer them a raisin. They could receive something far less pleasant.

Pet Rabbits Have No Traffic Sense

Except for daily exercise, a domesticated rabbit spends their life in a hutch. From there, they are protected from the threats of the outside world.

A prominent example of this is cars, and other motor vehicles. Rabbits have not been trained to look both ways when crossing the road. They’ll often fall foul of traffic, especially on country roads.

The truth is, domesticated rabbits are not naturally afraid of roads. They’ll often dawdle in a road, oblivious to the danger that could arrive at any moment. This is why rabbits, both domestic and wild, are such frequent roadkill.

Pet Rabbits Do Not Understand Weather

Another thing about a rabbit’s hutch is that it shields them from extreme weather. When left in the wild, there is no such protection available.

A domesticated bunny may instinctively dig a warren. That will offer some measure of respite. The rabbit may still be caught in a cold rain downpour, though. If they don’t dry off, the rabbit can develop pneumonia.

The molting cycle of a domesticated bunny may also be off-kilter. This is especially likely if the rabbit lived indoors. Rabbits shed their fur according to the temperature. This means that, in theory, they have a warm winter coat.

The problem is that rabbits don’t keep calendars. Their bodies react to light cycles to know when to shed and when to grow fur. The Rise and Shine Rabbitry discusses this in more detail.

If your rabbit lives under artificial light, they may fall out of sync with the elements. This can leave them vulnerable in cold temperatures. There’s also no option to move into the shed or garage when the temperature drops.

Pet Rabbits Need the Help of a Vet to Remain Healthy

You may think that your rabbit is safe in the wild as they’re vaccinated against myxomatosis. Unfortunately, there is a range of other diseases that impact wild rabbits.

Beyond contagious disease, rabbits also need general healthcare. Their teeth, for example, never stop growing. If a bunny doesn’t file their teeth, they’ll quickly become overgrown and painful. This can be fatal.

This problem becomes even likelier if the rabbit breeds. Two domesticated but unfixed rabbits may cross paths. They’ll recognize each other as part of the same species, and mate.

This will lead to a litter of baby bunnies. With no similar rabbits around, these youngsters will breed among themselves. Inbred bunnies can experience a host of health issues and deformities.

How to Prevent a Pet Rabbit from Escaping

As domesticated rabbits struggle in the wild, you may be concerned about your pet getting away. It’s true that bunnies can be escape artists.

Rabbits are mischievous and curious, always seeking new adventures and experiences. To prevent your rabbit from taking flight, follow these steps.

Domesticated rabbits that escape are capable of making their way home. They have a strong sense of smell, and a longing for security.

Leave the hutch open at night, with food and water, as they’re more likely to come home at night. If your rabbit has survived their adventure, they’ll likely make their own way home eventually.

How Can I Tell if a Rabbit is Wild or Domesticated?

The sight of rabbits hopping and playing is a common one for people in rural territories. It can sometimes be difficult to know if these are wild bunnies or missing pets, though.

If you’re worried that a local family is missing their cherished pet:

If you think that the rabbit is domesticated and lost, try to capture it. This takes time and patience. Try laying out some fresh vegetables in a plastic animal carrier, and close the door. Bunnies also love sweet food, so try some fruit.

Once you have the rabbit, get them to the local animal control center or a vet. From here, the owners of the rabbit will be tracked down, or it will be rehomed. Most responsible pet owners will have microchipped their rabbit.

If the bunny was wild, it will be treated for any illness and returned to its habitat. This is why you must handle the animal carefully. They may not have been domesticated at all, and could act aggressively through fear.

Never listen to claims that keeping pet rabbits is cruel, and they should be running free. The opposite is actually true. Any domesticated rabbit lacks the skills and instincts to live in the wild.

Pet rabbits are built to be pets. They are born in captivity, and expect to spend their lives that way. In doing so, they’ll live longer, happier, and healthier lives than their wild counterparts.