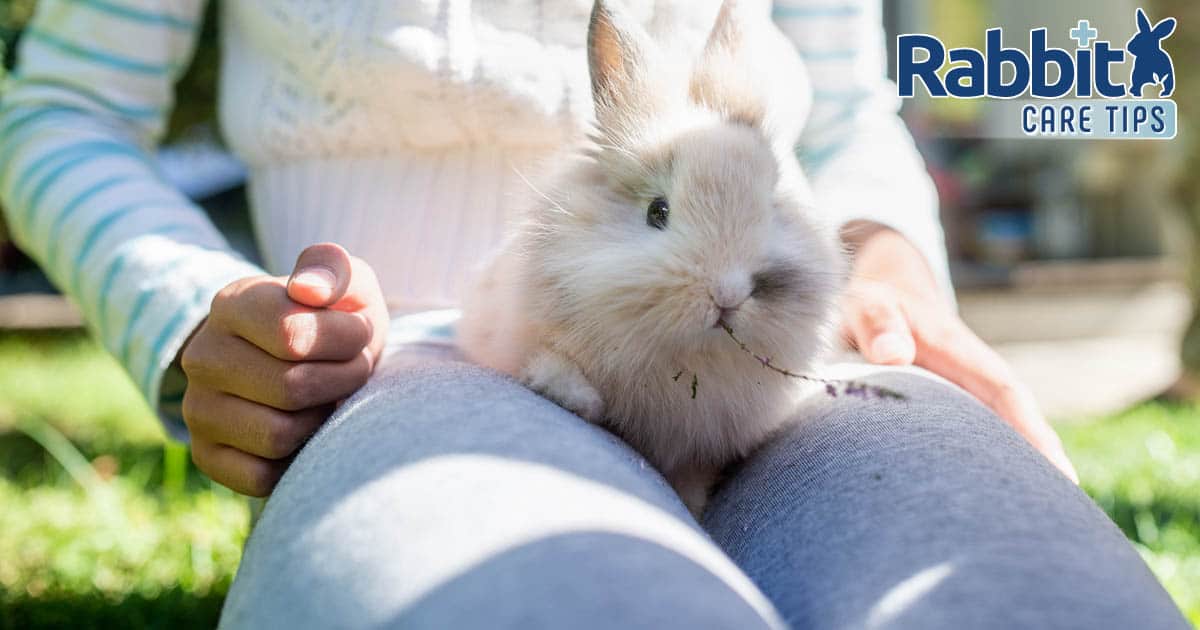 All rabbits can jump, as they have very powerful back legs, so they are more than capable of hopping onto your lap. Convincing them to do so might take some patience, however, but can be rewarding if you persevere, as it shows how much trust you have built up with your pet. Try out the steps below and give your rabbit the chance to show its affection for you.

Contents show
How Challenging is Training a Rabbit?
Stimulated Play
Avoid Being Too Ambitious
Train Your Rabbit to Jump Onto Your Lap in Six Easy Steps
1. Encourage Them to Jump Over or Onto Something
2. Sit on the Ground
3. Place Their Front Paws on Your Lap
4. Convince Them to Venture Further Onto Your Lap
5. The Final Jump
6. Move to the Couch
Related Articles:

How Challenging is Training a Rabbit?

Owners will find that when it comes to training a rabbit, young bunnies and older rabbits can be the most difficult.

Younger rabbits are more willful and will want to do their own thing, though they may become calmer once spayed or neutered. Just give a young rabbit more time to get used to their environment before looking to bond closely with them or teach them tricks. As long as they feel unthreatened while making this adjustment, they are likely to be more confident interacting with you later on.

If you have an older bunny, expect them to have little interest in learning new things. Instead, they will require an environment in which they feel comfortable and relaxed. Let them adjust, then see if they are happy to interact and bond with you.

Although rabbits may strike many people as shy and quiet animals, they do love to play and, like cats, they will learn through this. Encourage them to play in environments that are convenient for you, such as next to the couch where you sit. Toys such as willow balls are a great addition, allowing rabbits to occupy themselves and gradually feel more at ease.

See if your rabbit enjoys having you play with the willow ball too. These small steps are a good way to increase their affection, and they may eventually jump onto your lap.

Avoid Being Too Ambitious

Be aware that rabbits are not naturally cuddly like some cats and dogs. They may take time before they feel comfortable being on your lap, even if they do jump up occasionally. Be patient with them.

Even if you’ve been through the whole process of luring your rabbit onto your lap with treats, it might be that they still feel less keen to hang around for a cuddle. Understand that any attempt to physically restrict them will only increase their desire to leave.

1. Encourage Them to Jump Over or Onto Something

Rather than simply placing your rabbit on your lap and hoping they get comfortable, try a different approach. Using treats, see if you can get them to jump over small objects, like a plant pot or stick. Choose something small at first and you may find they enjoy the exercise and challenge. They may also figure out that you’re encouraging them to jump when you show them the object. You might also want to try a clicker. You can find them from most pet stores.

Make sure that any treats you give them are good for them and, although the process is meant to be fun, avoid cheering or making loud noises as you might do when encouraging a child. Rabbits like the quiet, and they will shy away if they feel they are drawing too much attention.

So long as they are jumping over something for fun and it isn’t harming them, it might be possible to steadily raise the height a little as a warm-up to jumping onto your lap. Even taking a few days to encourage them in this game might be worth it, as once they realize what you are suggesting, you will find it easier to relate to them by using specific actions and subtle sounds they are able to interpret.

2. Sit on the Ground

If you want your pet to show you affection and feel comfortable on your lap, then they will first need to feel at ease around you. As rabbits are shy and cautious animals, this will take some time and gentle persuasion. Being on the ground allows them to see you close up, and you will be in a relaxed stance that will not alarm them. Much better than having them only see your feet as you’re stomping around the garden.

Sitting on the ground will also encourage them to move and play around you. It also enables you to gently pet or stroke them as a sign of affection, allowing them to get used to you and feel pleased to have you around.

3. Place Their Front Paws on Your Lap

When you are interacting with animals, it is usually best to let them make the first move so they feel at ease. It is understandable that some owners might want to encourage their rabbit to sit on their lap by placing them there and gently preventing them from jumping away. It’s much better to get them to make the first leap, however. Taking all their paws off the ground will cause them to feel uncertain, so try sitting close by to see if they become curious and make the jump themselves.

This doesn’t mean there aren’t ways to speed up the process, however, such as including treats you know your rabbit likes. Offer your rabbit a treat if they do get curious and happen to place both front paws on your lap, or even just move a little closer. Upping the stakes each time allows them to get used to you gradually.

Another tip is to employ kisses just above your rabbit’s nose. Rabbits interpret this as a sign that you are pleased with them; all animals crave affection, and it could mean that they progress more quickly.

Once they realize you’re laid back and gentle, they may then feel that they want to jump onto your lap and be affectionate.

4. Convince Them to Venture Further Onto Your Lap

Once your rabbit is comfortable with placing their paws on you and receiving affection, you can then encourage them to go further by placing the treats a little further away. As your bunny stretches to reach its favorite treat, it will realize that jumping onto your lap is okay. Expect them to be shy at first, as you are asking them to jump onto a surface they are not used to.

Avoid taunting them with the treat by moving it as they reach for it. Instead, focus on adjusting what is required each time but letting them know that if they dare to go further, then the treat will be there for them.

Go through this process at a slow pace and be prepared to take a bit longer if your rabbit is small. Progress a little at a time, enabling your pet to feel comfortable around you and adjust to your scent. Even the most confident rabbits will be cautious in nature and need to learn that there won’t be any negative consequences when they do place their trust in you.

With all these steps taken and progress made, you’ll be keen to complete the process. Place the treat as close to the center of your lap as you need to for the rabbit to have to hop on. Once they do so, use those familiar signs of affection that you’ve built up to let them know that they are safe to remain.

Don’t worry if they jump back down fairly quickly. It’s more important to show them that they have the freedom to do so if they wish. Physically keeping them in one place will not grow their trust in you. Your rabbit will not immediately crave affection from you, so this trust will need to be built up. If successful, your pet’s attitude toward you will shift thanks to the time and care taken to establish a relationship.

6. Move to the Couch

Once your pet feels at ease jumping onto your lap when you are on the floor, it might now be worth trying on the couch. Similarly though, rather than picking them up, tempt them to jump onto the couch in the same manner using treats.

This might take some time as they will not be used to the surface and the jump is likely to be greater than previously attempted. You could use a step of some kind if you think the couch is too high to make the process even more gradual.

Once your rabbit has ventured onto the couch and is comfortable with how its uneven surface feels, it should then be possible to get them onto your lap. If you use the same methods as before, there’s no reason why this shouldn’t work, and perhaps it will be even quicker this time.

As with before, give kisses just above the nose so they are familiar with being in your presence and will feel at ease. You can expect it to take several days before they are fully comfortable on your lap, but be reassured that once the routine is established, they should become more and more content with being in close proximity to you.

Don’t be too disheartened if your rabbit still prefers to sit next to you rather than on your lap. They are still close and comfortable in your presence and it is probably better to go with what their preference is rather than looking to force the issue.