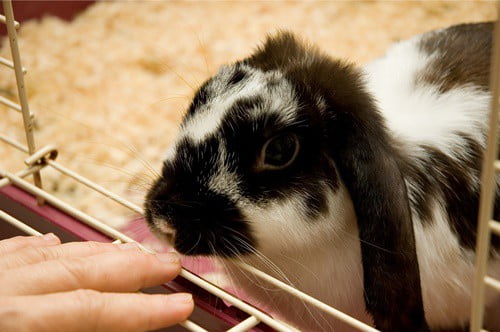 Rabbits engage in all manner of strange activities that seem to make no sense. One of the most common is rubbing their chin on objects. This is also referred to as ‘chinning.’

Rabbits have scent glands located beneath their chin. When they rub their chin, they leave their scent behind. This is a rabbit’s way of claiming something as their own. By rubbing her chin on something, your pet is announcing that it now belongs to her.

Chinning is a completely natural rabbit behavior and is nothing to worry about. The scent left behind will not be detected by the human nose and will not cause any damage to your possessions.

What Does it Mean When a Rabbit Rubs Her Chin?

This is because your rabbit’s scent glands are located in her chin. When a rabbit rubs her chin on something, she is leaving her scent behind. This cannot be detected by humans, but the smell can be detected by rabbits. There are numerous reasons for the behavior:

Chinning will be common if you have more than one rabbit. Each pet will mark a preferred food bowl or a favorite toy, for example. If two rabbits have bonded, they’ll respect each other’s property.

If you have a pair of highly territorial rabbits, keep an eye on chinning. One rabbit may continuously attempt to supersede the other rabbit’s scent with her own. This can become a war of attrition.

My Rabbit Rubs Her Chin on Everything

When you first bring a rabbit into your home, she will rub her chin on everything she encounters. The carpet, your furniture, your possessions, etc.

Rabbits are territorial. Your pet is hopping around her surroundings and claiming what she can. Every time she rubs her chin, she is saying, “this is mine.”

It doesn’t mean that your rabbit will no longer allow you to sit on the sofa. It’s just your rabbit’s way of making herself feel at home. If a rabbit has staked her claim on territory, it’s easier for her to relax.

The only time to be mindful of chinning is when it’s paired with aggression. Rabbits do not take kindly to their territory being invaded or her scent being removed. Your pet will likely growl and grunt when you clean her hutch.

My Rabbit Rubs Her Chin on Me

If your rabbit rubs her chin on your, take it as a compliment. It’s a sign of affection that your rabbit wants to mark you. It means that she considers you to be very important to her.

Your rabbit will also rub her chin on you after you bathe or shower. When you’re clean, you no longer smell of rabbit. Your pet is making sure that she reclaims you before another pet does.

You’ll also likely find your rabbit chinning your feet and shoes. This is because she smells things from the outside world on them. Your pet wants to ensure that you do not forget about her.

If you have other pets, your rabbit will chin you with increasing regularity. This is so she can supersede the scent of other animals. Your rabbit wants to ensure that there is no confusion.

My Rabbit is Rubbing Her Chin on Other Rabbits

If your rabbit is chinning another rabbit, it is often a display of affection. You’ll see this if you visit rabbits in pet stores or shelters, for example. Bonded rabbits will rub their chins on each other.

The rabbit could also be displaying dominance. This is especially likely if the submissive rabbit bows her head. This is a sign of respect. The submissive pet is acknowledging the dominance of a mate.

A dominant rabbit will often force her head under the chin of a submissive partner. This is a demand for grooming. 99% of the time, the other rabbit will agree to these wishes. It’s not a coup for the role of a dominant rabbit. It’s an observation of the rabbit hierarchy.

My Rabbit is Rubbing Her Chin on Food

Food is vital to rabbits. Your pet may be tiny, but she’ll have an appetite that belies her diminutive size. This means that she’ll lay claim to anything edible inside or outside of her hutch.

If two rabbits share living quarters, a dominant rabbit may chin pellets and tasty treats. This is sending a message to the other pet(s). Dominant rabbits usually get to eat first. Keep an eye on this, and ensure both rabbits are eating properly.

Your rabbit may chin human food on your plate. You love your pet, but that doesn’t make this behavior hygienic. In addition, most human food is lethal to rabbits.

Rabbits have very specific dietary requirements, so you need to train your rabbit out of this behavior. It’s a more aggressive form of begging and it can get out of control. Teach your rabbit that her food is separate from yours. If necessary, place her in her hutch while you eat.

Also, be aware that rabbits typically have a sweet tooth. You’ll likely find your pet rubbing her chin on fruit in the kitchen. She picked up the scent of a banana or carrot, and knows she likes the taste.

Should I Stop My Rabbit from Rubbing Her Chin on Things?

Your rabbit isn’t hurting anybody by leaving her scent. The aroma will be invisible to human noses. The rubbing does not cause any damage to furnishings or possessions. There is no need to stop your rabbit from chinning items.

If you discipline your rabbit for doing what comes naturally, she’ll mark her territory in other ways. Your pet will pee or poop on things that she encounters, which is more problematic.

Do Rabbits Have Any Other Scent Glands?

Rabbits do have another set of scent glands, but ‘thankfully’ they’re not used to mark territory. We say thankfully because these scent glands are located between a rabbit’s genitals and anus.

These scent glands are more for a rabbit’s purpose than yours. If your rabbit is clean, you’ll never smell these glands. They will be used to send important messages to other rabbits.

If these scent glands become blocked, they will need to be cleaned. You’ll know when this need arises, due to the pungent smell. Every so often, wax builds up and causes a blockage.

Oxbow Animal Health discusses how you can clean out a rabbit’s scent glands. The good news is that those under the chin don’t need to be cleaned. Your rabbit will keep them clear herself.

When your rabbit rubs her chin, she is enjoying herself. It makes her feel more comfortable. As long as your rabbit is not overly aggressive, there are no negative repercussions of this behavior.