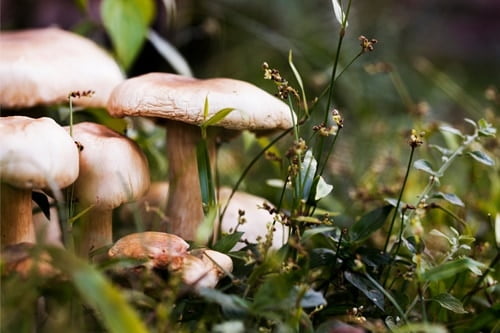 Although rabbits love to eat green veg, it shouldn’t be assumed that all veggies are safe for rabbits to eat.  In fact, some vegetables are harmful to rabbits.

Rabbits should not eat any type of mushroom (wild or shop-bought). Some mushrooms contain Mycotoxins which, if ingested by rabbits, can lead to Mycotoxicosis (I.e. poisoning). Wild mushrooms, such as Death Caps and False Morels, are the most dangerous varieties.

According to reports, mushroom poisoning in rabbits is rare. However, this may be because mushroom toxicity is very hard to detect. So, it’s hard to say exactly how many rabbits have died from eating mushrooms. To keep your pet safe, learn how to prevent mushroom poisoning.

Although scientists have not widely studied this topic, it is believed that mushrooms (of any kind) can be poisonous to rabbits. So, mushrooms can kill rabbits.

While some shop-bought mushrooms may not kill a rabbit, plenty of wild mushrooms can be extremely toxic. As the effects of each mushroom are unknown, most vets would recommend that you avoid feeding rabbits mushrooms of all types.

Even if eating the mushroom does not cause death, it can cause kidney disease, paralysis, or cancer. It’s simply not worth taking the risk.

Mushrooms are technically a type of fungus, and are abundant in most parts of the world. However, they are most common in warm and wet, woodland areas.

In the U.S. alone, there are several thousand types of wild mushrooms. Around 100 of these mushrooms are poisonous to humans. We don’t know exactly how many are harmful to rabbits.

The mushrooms we get at supermarkets (I.e. button, chestnut, Portobello) are usually farmed in strict conditions. This means they are safe for human consumption, but we cannot assume these are safe for lagomorphs and other small animals.

Why are Mushrooms So Dangerous for Rabbits?

Mushrooms are a type of fungi. According to Jrank, certain types of fungi contain mycotoxins. These mycotoxins can be fatal to rabbits (and humans). The most harmful mycotoxins include:

Although mushrooms from the supermarket don’t tend to contain these toxins (at least not in large amounts), many types of wild mushrooms do.

If rabbits consume these toxins, this will most likely lead to Mycotoxicosis (I.e. poisoning).

Wild Mushrooms That Are Toxic to Rabbits

Mushroom toxicity has not been widely studied in rabbits. So, we have to rely on information from other animal studies.

According to NCBI, the following mushrooms cause illness or death in dogs. It is thought that these types of mushrooms also pose a threat to other companion animals, like cats and rabbits.

This list of mushrooms toxic to rabbits is not exhaustive. In addition to the above, some research suggests that store-bought button mushrooms (I.e. Agaricus bisporus) cause cancer in rodents. So, we can predict that these mushrooms may similarly affect rabbits.

In truth, we do not yet understand precisely which mushrooms are deadly to rabbits. That’s why it’s essential to keep all mushrooms off the menu. This is the only way to keep your rabbit safe.

Rabbits prefer a species-appropriate diet (hay/grass, certain plants, green veggies, fresh herbs, and water). However, pet rabbits may sometimes graze on other foods. They are more likely to do this if food is scarce, or if their current diet lacks the appropriate nutrients.

As far as we can tell, wild rabbits do not eat mushrooms in the wild. The only time they might do this is if there are no alternative options.

How to Prevent Mushroom Poisoning in Rabbits

Mycotoxicosis (I.e. poisoning) is notoriously difficult to treat. So, prevention is an absolute priority. To prevent mushroom poisoning in rabbits, keep the following points in mind:

How Common is Mushroom Poisoning in Rabbits?

Thankfully, cases of mushroom poisoning in rabbits are rare.

Between 2006 and 2010, the ASPCA Animal Poison Control Center (APCC) received 2090 reports of mushroom exposure in pets. Only one case involved a rabbit.

Most cases of mushroom poisoning seem to affect dogs. This may be because dogs are less discerning when grazing and will eat almost anything they come across.

Thankfully, rabbits seem to be better at sensing that mushrooms are bad for them. However, the low number of reported cases may also be because mushroom toxicity is hard to diagnose in rabbits (and rarely investigated after death).

What to Do If Your Rabbit Has Eaten Wild Mushrooms

If you notice your rabbit has eaten a wild mushroom, this should be treated as a medical emergency. Although some mushrooms are more toxic than others, it’s advisable to assume the worst. The earlier a diagnosis can be made, and treatment can be given, the better.

If your rabbit has been poisoned, symptoms will usually start to arise within a couple of minutes. However, they can take longer. If the reaction takes more than 8 hours, this suggests a more harmful toxin has been ingested (amatoxin, cyclopeptides, or orrellanine). That’s why, as the RPSCA says, you must not “watch and wait” if you suspect poisoning.

Call your vet and arrange for an emergency appointment. Your vet may ask you to bring a sample of the mushroom. This is best placed in a cloth rather than a plastic bag.

Do not try to induce vomiting. It is not safe because rabbits can’t throw up.

Symptoms of Mushroom Poisoning in Rabbits

Symptoms can arise quite quickly (within 15 minutes) or may take several hours. Depending on the type of mushroom/mycotoxins ingested, symptoms may include:

If you fed your rabbit shop-bought mushrooms, the risk of poisoning is lower, but there is still a reason to be concerned.

You should call your vet immediately and ask for advice. You may be advised to bring your rabbit in, or it may be OK to closely monitor your rabbit at home over the next 24 hours.

Whether treatment is necessary or not, you should not allow your rabbit to eat any more mushrooms. Prevention is always best, as treating mushroom poisoning in rabbits is very difficult.