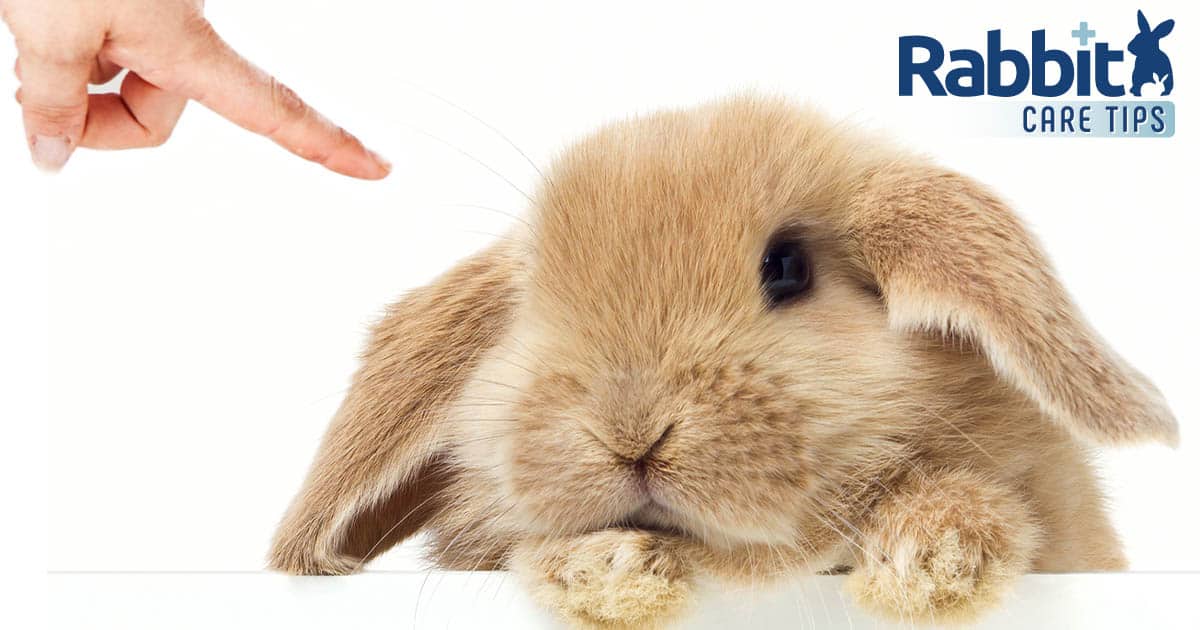 Discipline for a rabbit, therefore, does not depend on shouting or punishment but on actions that can be interpreted as dominant. The aim is to redirect poor behavior without causing your pet distress. Rabbits will know if they have done something wrong during play if they are immediately put back into solitary, for example. Some owners also use spray bottles (see below) for small misdemeanors like a bite.

There are other ways to discourage poor behavior, though, so read on to find out how to maintain a healthy bond with your pet while also teaching them to behave well.

One physical action that can communicate your displeasure is to place a little pressure on your rabbit’s back. Rabbits do not like to think that their movement is being restricted. This technique can be effective if they become overly annoyed or even vicious when you don’t give them extra treats, or when you stop playing with them. Don’t press hard enough to cause discomfort, however; simply place your hand there to remind them of your position of strength. Do not persist with this technique if they show any distress.

Using treats can help them to understand right from wrong as well as reminding them that you’re in charge, but don’t overdo it. Offering too many rewards will undermine your position of dominance.

Adopt a Voice of Authority

Rabbits are bright and perceptive. Indeed, many people are not aware that a rabbit can pick up simple commands just like a dog. Training them in this manner is not easy, though; it can take time and effort but can be well worth it in the end.

Your rabbit will quickly pick up simple instructions like “no,” but try not to sound too angry when you give these commands. Once “no” has been mastered, you might be able to move on to more complex instructions such as “don’t do that,” and “come here,” as well as telling them when they need to jump off your lap.

Getting rid of bad habits can take a bit of work, but once your pet starts getting used to these commands, they will begin to understand what you do and don’t want them to do.

Cat owners will be familiar with the use of water as a deterrent, and your rabbit will react to water in a similar way to a cat. Don’t be too dependent on spray or use it to stop them chewing, but when they do misbehave, then a quick spray with a dominant “no” can quickly change their habits. Try it a couple of times when necessary and they should get the message.

Remember not to apply spray directly to the face or back. Too much water might irritate your rabbit and lead to worsening behavior, so have a timeout instead if there is no obvious breakthrough.

This technique – also effective with toddlers – is perhaps the best and most useful form of teaching, acting as a non-aggressive punishment.

If possible, choose a part of the home where your rabbit can remain in solitude but without the homely comforts of their cage. Just a short spell without company or bedding will likely change their urge to behave poorly. Remember that rabbits are social animals, so they will be disappointed if their actions cause you to disappear.

Avoid overdoing it with lengthy periods in solitary, though. Even short periods of time can drag for a bored rabbit, so it won’t take them long to be pleased to see you again.

Squeal if They Have a Biting Habit

Most rabbits do not bite, but this does not mean that they can’t or that yours won’t. Even the gentlest rabbit may give your hand a bit of a nibble as a sign that they like you. Try to tolerate gentle nibbles to your skin, as this does not really cause any harm and is just your rabbit trying to tell you something. Be conscious, however, that your rabbit might bite if you’ve missed something they’re used to or if they’re feeling hungry for either food or attention.

It will be clear if your rabbit is biting out of anger. If you’re keen to make them stop, a loud enough squeal – but not loud enough to cause alarm – should do the trick.

A rabbit that is biting out of affection will respond to the idea that they may be causing harm and decide not to do so again. Subtle communication like this can be so useful.

Clapping might be pleasant to human ears, but rabbits consider sharp and sudden loud noises alarming. If you clap to get them to stop something, they simply will not get the message because they will only be focused on their own distress. Even worse, as rabbits are prey animals, a sudden shock can prove fatal.

Gentle and calm behaviors are best for bonding with a pet rabbit; therefore, rely on a method other than clapping that will not have a negative effect.

Just as picking a rabbit up after they have been naughty is too lenient, taking a physical approach when they misbehave is going too far. In both instances, you need to be subtle so that they can learn without becoming scared.

You should also never punish them for a habit they can’t help: chewing. Rabbits need to chew, so make sure they have enough hay and toys. This is a better way of stopping them nibbling on your furniture than shouting at them or striking them.

Striking a rabbit brings no benefit to either of you; your rabbit will likely become traumatized and never trust you again. Some rabbits can hide for days if they get scared.

Rather than looking to change your bunny’s character, refocus their attention on to something else instead, such as a chew toy. Take a smart approach and remove anything precious from their reach, and if a certain behavior is not an issue, just let it go.

All rabbits will have their own habits and preferences, so it’s just a matter of finding what suits them. As rabbits appreciate having something to chew on, support them by offering plenty of options. Your rabbit may have a favorite toy, for example, so offer the toy for them to nibble on rather than allowing them to chew something you don’t wish to see damaged. Also ensure that they get plenty of stimulation in their lives, as this will reduce any bad habits.

It might not be possible to change a rabbit’s habits completely, but they can be significantly reduced so as not to cause a problem. Allowing your rabbit to continue with their chewing habits to some extent is better than removing all opportunities completely, as this will stress them.

Use a mixture of activities, interactions, and toys to draw their attention and reshape habits. Most decent pet shops will have some fun options, such as balls to play with or slopes to run up and down.

If a rabbit enjoys a certain activity, then do your best to encourage it, as restricting their access can lead to aggression. Try to be patient and understanding as you get to know your new friend.