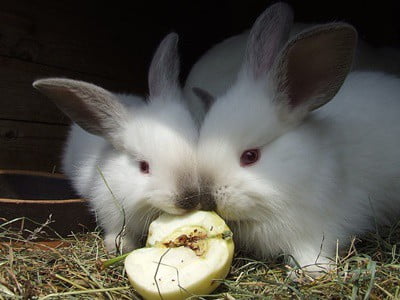 Rabbits are grazing animals. In the wild, they largely feed on grasses, wildflowers, vegetable plants, clover, twigs, and bark. They keep on eating throughout the day and are likely to eat, tastier, higher-calorie foods if given the choice. This makes you wonder if rabbits feel full, and if they’ll stop eating food until they feel hungry again.

Rabbits do realize when they’re full. However, they can’t throw up if they eat too much or if they consume something that is bad for them. Anything that’s eaten remains with the rabbit until it passes through its system. Rabbits are supposed to eat almost continuously to ensure their digestive system is working properly.

Rabbits are likely to feel fuller if given a diet that’s rich in hay, grass, and other fiber-rich foods. Fruits, vegetables, and pellets should be offered moderately or as treats. Rabbits will eat as much of these foods as they can get. Filling up on treat foods upsets their digestive tracts, causing diarrhea, bloating, obesity, and gastrointestinal stasis (GI stasis).

Can You Overfeed a Rabbit?

Rabbits are enthusiastic grazers and they’ll continue eating throughout the day. They’re also known to be concentrated selectors.

In the wild, they’ll pick through meadows and select greens and succulent shoots packed with nutrients. They may chew through plenty of roughage. A rabbit’s digestive tract is designed to continually process a high-fiber diet.

However, domestic rabbits don’t have the choice to skim through large meadows with a variety of grasses and greens. Rabbits are more likely to overeat low-fiber, high sugar foods. The lack of fiber in these foods can prevent rabbits from feeling full, causing them to inhale their meal.

If your rabbit doesn’t self-regulate its food intake, it’s daily diet will have to be carefully proportioned and monitored. This will minimize treats high in carbohydrates and fats, such as fruits, high-sugar veggies like carrots, and low-quality pellets. Instead, your rabbit’s diet will mainly focus on grass hays and dark leafy greens.

When Does a Rabbit Stop Eating?

Your rabbit will stop eating when it’s satiated or during rest. However, it’s important to keep in mind that it’s normal for rabbits to eat numerous times throughout the day.

A rabbit will stop eating and drinking if its digestive tract shuts down, causing starvation and death.

GI stasis is a common life-threatening issue in rabbits, largely caused by a fiber-poor diet, rich in unnecessary carbohydrates and fat.

However, it can be prevented with a high-fiber, low fat, low-carbohydrate and a reasonably low-protein diet.

Can You Free Feed a Rabbit?

This depends on the rabbit. Some rabbits can self-regulate their food intake and consume moderate amounts of food. And others may overeat and concentrate on low-quality foods that are dense in calories.

Rabbits that have a tendency to eat more and gain weight should be offered food in portions. Healthier eaters that don’t have weight issues make prime candidates for free-feeding.

Rabbits are prone to obesity, which can lead to serious health issues if not controlled properly. According to Pathophysiology, stress-sensitive animals such as rabbits are highly susceptible to heart failure and hypertension.

New owners are surprised by how much a rabbit can eat. Rabbits spend most of their mornings and evenings eating hay.

Even when they’re resting, rabbits may wake up to chew on some hay, before going back to sleep. However, when it comes to fruits, vegetables, and store-bought treats, you’ll find that your rabbit is greedier than usual.

If your rabbit is eating more hay than usual, you don’t have to worry. It’s normal for a rabbit’s appetite to fluctuate, as long as it doesn’t overeat any treats.

Rabbits are more likely to overeat treat-foods, such as carrots, apples, and berries, because they’re sweeter and they taste better. But more importantly, these foods don’t have as much fiber as hay does.

Hay, that should make up 75-80% of your rabbit’s diet, is high in fiber. Fiber is essential for rabbits because it regulates their digestive tract, provides them with important nutrition and keeps them satiated.

The following table explores the complications associated with overeating in rabbits and how you can detect them.

Fiber is a filling nutrient that forms a low-calorie bulk in your rabbit’s diet. Rabbits that eat a hay-rich diet consume much fewer calories than rabbits that are given ample fruits and vegetables. Therefore, the latter group has a much higher likelihood of overeating and getting fat.

According to the Journal of Animal Physiology and Animal Nutrition, rabbits that were given muesli consumed less water and hay. Although considered healthy and fiber-rich for humans, muesli is too high in sugar and carbohydrates for rabbits.

Fruits and high-sugar veggies, like carrots and radishes, are delicious. It’s nearly impossible to feel full with just a couple of pieces. If you give your rabbit too many treats, it may feel unwell. In such cases, cutting back on vegetables and fruits and offering unlimited hay can help.

If your rabbit is lethargic, unresponsive or seems bloated, contact your vet. Being prey animals, rabbits tend to hide feelings of weakness and show signs only when their sickness has progressed.

Rabbits spend a large portion of their waking hours eating. Once they’re full, they may sleep, but still continue to chew on hay between rest periods. A rabbit’s digestive tract relies on its ability to eat continuously. Not keeping the digestive tract motile for several hours in a row can lead to gastrointestinal complications that can become fatal.