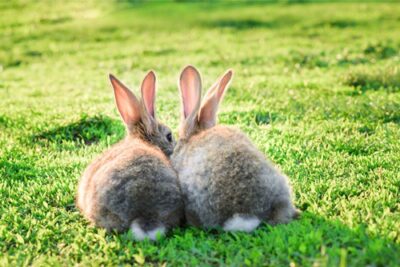 Rabbits are social, relationship-focused animals. So, it’s vital to a rabbit that its message is clearly understood. Rabbits communicate using body language, and apologizing is one example of this behavior.

Rabbits apologize by touching heads. Bonded rabbits rarely fight, but it can sometimes happen. If the rabbits groom each other after touching heads, then the apology has been officially accepted.

Rabbits are usually keen to make amends, but can be stubborn about doing so. A rabbit can hold a grudge for a few hours, or even many days. You may need to separate your rabbits until they have re-bonded.

Do Rabbits Fall Out with Each Other?

The union of two bonded rabbits is unlike many relationships. When two rabbits bond, they are usually friends for life. They will appear inseparable and do everything together.

While your rabbits would not be without each other, they can fall out on occasion. Usually, this is a temporary issue. Once an apology has been issued and accepted, the relationship will be resumed.

Do not allow a rabbit squabble to escalate to a fight. This can result in injury and permanently damage a relationship. Separate your rabbits temporarily, but ensure they can still see and smell each other. They will soon be keen to apologize to one another.

Do Rabbits Apologize by Touching Foreheads?

Rabbit behavior can often be puzzling to pet owners. Many body language cues of rabbits can be mistaken for something else, including apologies.

When a rabbit wants to apologize, it will approach its mate. It will drop its head and rub it against that of the other rabbit. They may also rub noses. If you are unfamiliar with this, it may look like renewed aggression.

Rabbits put their heads together to apologize. Both rabbits should hold this position for a few seconds. If one rabbit walks away, it is not ready to accept the apology yet. Separate the rabbits and try again later.

Rabbits do not seek to please human owners. However, your rabbit doesn’t want to have a troubled relationship, so it may push its head against you. If it does this, show that you forgive it. Hold the pose and offer petting or a favorite treat. Your rabbit must know you are back on good terms.

How Do Rabbits Forgive Each Other?

A successful rabbit apology will involve the touching of heads for a few seconds. After this, it should continue as usual. The rabbits will go about its day as though nothing happened. Grooming will also likely take place.

Grooming is critical to rabbit communication. It’s the easiest way to identify the dominant and submissive dynamic in a rabbit pairing. The dominant rabbit will expect grooming from the submissive rabbit on demand.

If the dominant rabbit allows itself to be groomed, the 2 rabbits are friends again. It’s an acknowledgment from a rabbit that it was in the wrong.

You may also notice your rabbit crouching, and making itself smaller. This is another cue of submission. Your rabbit is accepting that it was in the wrong and understands its place in the hierarchy.

Monitor the grooming carefully at first. There is a slim chance that it could turn into a fight again. This is unlikely, though. Grooming is a sacred ritual for rabbits and comparatively intimate. A rabbit will not allow a subordinate to groom if it concerned for its own safety.

If your rabbits are unable to get along after a fight, you’ll need to attempt re-bonding. Completely separate them from a while and start the bonding process from scratch.

How Do I Apologize to My Rabbit?

There may come a time that you need to apologize to your rabbit. Rabbits are proud, and it’s easy to inadvertently cause offense. If you do so, apologize as soon as your rabbit will allow. There are numerous ways that you could accidentally offend your rabbit. These include:

Usually, it’s comparatively easy to earn a rabbit’s forgiveness. Do not attempt to place your forehead against its forehead. You are significantly bigger than your rabbit and this will likely frighten it. Offer a treat.

A rabbit can be as stubborn if it feels that it has been mistreated. There are sliding scales to grudges and they can take time to resolve. Here are some of the different scenarios that you may observe:

These same behaviors could also be displayed toward another rabbit. Enhanced aggression is also a risk in these cases. If one rabbit is holding a grudge, it’s best to separate them for a while.

No owner ever wants to see two rabbits fall out. The deep bond that rabbits share is very special. Disagreements can happen, though. As long as an apology is offered and accepted, it’ll soon be a thing of the past.

1 thought on “How Do Rabbits Apologize to Each Other?”