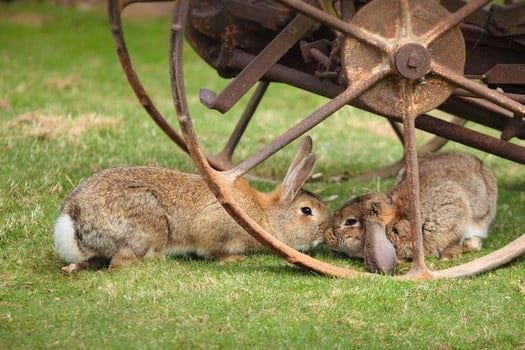 Rabbits are communicative pets, using a range of body language cues. As well as detecting new scents, bunnies use their noses to communicate with each other. When two rabbits touch noses, it will always have a distinct meaning.

The two rabbits are likely cementing their dominant/submissive dynamic. Rabbits often touch noses to apologize following a falling out, and acknowledge their respective roles. One rabbit will lower their head after they rub noses. This is a precursor to grooming.

Rabbits hold their noses against each other and stare into each other’s eyes. This usually denotes affection among bonded bunnies. Watch out for angry vocalizations, though. This suggests that the rabbits are fighting for supremacy. Neither will back down, so you’ll have to separate them.

Why are My Rabbits Touching Noses?

Two rabbits putting their noses together is often a sign of affection, but it has other explanations:

Be aware, though. Bunnies going nose-to-nose does not always have a happy ending. You have to observe the rabbits. One may bite the other if you misread the situation.

This happens when the rabbits are yet to decide their hierarchal status among themselves. In any group of rabbits, one bunny will be the dominant figure. This alpha will expect to be groomed upon demand, as a sign of respect.

They’ll request this by approaching another rabbit, bowing their head slightly, and staring into their eyes. If the submissive rabbit acquiesces to this demand, all will be well. If they stubbornly refuse, the dominant rabbit will bite to remind them who’s boss.

Sometimes, rabbits fall out. They can be hot-tempered and impulsive, which leads to differences of opinion. Rabbits can be moody, jealous, and hold onto resentment.

Thankfully, their general nature is docile. This means that, if two rabbits fall into a disagreement, they will often apologize afterward. This is done by touching noses and holding the position.

The explanation for this comes back to the sense of hierarchy that defines so much rabbit behavior. The rabbits are explaining to each other that they understand their position in the pecking order.

This may sound like problematic behavior to humans, but it makes perfect sense to rabbits. Bunnies will be happy to express themselves this way. Touching noses is often the first step to clearing the air after an inter-rabbit disagreement.

You can try this as a rabbit owner, too. If your rabbit is unhappy with you, rub your nose against theirs (if they’ll let you.) In most cases, the rabbit will accept your apology. It may take more grooming before they forgive you, though.

Rabbits have an advanced sense of smell. Like many animals, they trust their nose implicitly – significantly more than their eyesight. This means a bunny will make a point of smelling any hutch mates to judge their character.

Bonded bunnies always notice when their friends leave the hutch. When they later return, expect to see this behavior. The remaining rabbit wants to know where their friend has been.

Have they been fraternizing with humans? Have they been playing with other rabbits? Are they safe, or do they smell of a predator? These are all questions that will race through a rabbit’s mind.

Of course, the likelihood is that the rabbit had to visit the vet. There are few other reasons to separate bonded bunnies. All the same, the rabbit that remained doesn’t know this. They’ll want to check that everything is above board.

The rabbits may also assess each other after this brief separation. They are ensuring they still know their respective roles in the dynamic.

The dominant rabbit is making sure the submissive pet doesn’t have new ideas about seizing power. The submissive rabbit will set their mind at rest. After a few moments of touching noses, both bunnies should be satisfied.

Perhaps the most charming thing about owning multiple rabbits is watching them bond. When rabbits make friends, they typically do so for life. Touching noses, and staring into each other’s eyes, is a big part of this.

Gazing is a favorite pastime among rabbits. If a bunny is happy and contented, they’ll often relax and stare for hours.

It looks like the rabbits are sitting in companionable silence, but they’re actually communicating. Bunnies are masters of body language. Some of their cues are too subtle for humans to pick up on, but they’re present.

Rabbits will twitch noses and ears constantly, sending messages to each other. For all we know, they’re talking about us.

If the rabbits are not verbalizing while they touch noses and stare, all is fine. They can stay this way for hours. They may even doze off in this position.

If the bunnies start to growl, hiss or snort, it’s advisable to separate them. This suggests that the staring has turned sour. Let the bunnies cool off in separate territories before reuniting them.

Staring does not only take place among bonded bunnies. Often, two unbounded rabbits will stare into each other’s eyes for hours. They’ll also edge closer to each other, and touch noses. This must be observed.

Two rabbits will never consider each other to be equals. Even among the happiest, most bonded pairings, there is an alpha and a beta. The bunnies need to assign these statuses among themselves.

They’ll do this by staring and touching noses. The rabbits are seeing who will blink first, and groom the other. This is how dominance is established among bunnies. Submissive rabbits are expected to groom their hutch mate on demand.

Even when the rabbits have bonded and found their role, this behavior must be watched. The dominant rabbit will touch noses, and bow their head slightly. This is expressing an expectation of grooming with immediate effect.

Most submissive rabbits will obey this command, and all will be well. Sometimes, though, bunnies can be stubborn. If the dominant rabbit feels that their subject is being deliberately noncompliant, they’ll likely bite them.

This is intended as a warning to the other rabbit not to get too big for their boots. If the submissive rabbit is feeling rebellious, they’ll bite back though. This, naturally, leads to a fight.

Fighting rabbits must be separated immediately. They can cause each other severe damage to teeth and claws. Also, it can be tough to re-bond bunnies after a fight. Rabbits are capable of holding, and nurturing, a grudge.

Most of the time, touching noses is a sign of affection. These differences of opinion can arise among bunnies, though. It always pays to be mindful of them, and the relationship between your rabbits.

My Rabbit Touches Noses with Me

As My Bunny explains, this is quite the compliment. If a rabbit rubs noses with their human, it’s a sign of respect and love. If they purr or cluck too, the bunny is wholly enamored with you.

You may find the rabbit also licks you, which is another seal of approval. This is the rabbit grooming you. Rabbits only groom those they consider their superior. As they are so dominant, they rarely grant such a privilege.

Rabbits also touch noses with other household pets to show affection. This will need to be overseen. If the rabbit lunges toward a cat or dog, the other animal may misunderstand. Bunnies rarely come out of any confrontations well.

Be aware that not every nudge with a nose is a sign of adoration. This only applies if the rabbit rubs your nose. That’s a rabbit kiss. A general nudge on the hand or leg is a request for attention.

Usually, this means that the rabbit wants a snack, or some petting. It’s advisable to provide this upon request. A light nudge is a polite way of gaining your attention. If this doesn’t work, the rabbit will nip or bite.

Rabbits touching noses is always something to note, and observe. Most of the time, it’s good news. It means your rabbits are communicating, and getting along. If they rub their nose against your own, you’re definitely in their good books.

Every once in a while, though, touching noses can be a precursor to aggression. It’s essential to understand when your rabbits are feeling feisty.

Learn their verbal and physical tics, and take the required action. They’ll soon cool off – and, ironically, touch noses to apologize for their behavior.