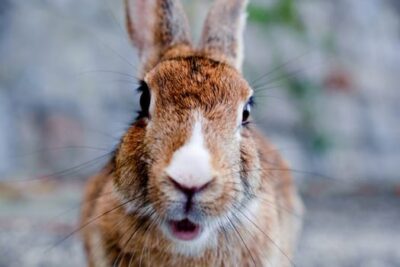 If you have two pet rabbits, you may have noticed that one of them seems to be unhappy and unsettled. Whenever you handle one bunny, the other tries to get in their way to get your immediate attention. They’re behaving as though they are jealous of the other rabbit.

Jealous behavior occurs when one rabbit feels that the other is being treated better. Rabbits are hierarchical animals, and want to be the center of attention at all times. Handling other rabbits, or spending time with humans, leads to feelings of envy. This, in turn, leads to aggression and behavioral issues.

Rabbit jealousy must be managed carefully. A bunny that believes that they’re being treated unequally will make life significantly more difficult. Always treat multiple rabbits equally, and ensure that each of them receives sufficient attention.

Jealousy in rabbits is surprisingly common. Despite what you may believe, rabbits are highly evolved animals. They experience a wide range of simple and complex emotions. Rabbits can become jealous for many reasons. These could include:

Jealousy may seem amusing at first. Your bunny will act haughty, and try to attract your attention. It’s not something that can be allowed to flourish. A jealous rabbit can become hard to care for.

Why Would a Rabbit Be Jealous?

The explanation for rabbit jealousy is simple. Bunnies, despite their soft and cuddly appearance, are very bossy. If they don’t feel that they are top of the hierarchy, it can become upsetting.

This may be because a rabbit feels like a fellow bunny is getting preferential treatment. Your pet will notice if their fellow rabbit receives more treats, or attention.

Your rabbit will be acutely aware if something changes in their routine. A new houseguest, for example, or the arrival of a baby in the family. If the attention that a rabbit receives drops sharply, they’ll know and won’t like it.

As far as your bunny is concerned, you are their world. Rabbits grow easily bored, and rely upon you to meet their needs. If you stop doing so, they’ll take out their envy on another rabbit or human.

Rabbits will work out their place in the bunny pecking order among themselves. It’s your responsibility to ensure that feel safe, happy and equally valued. No rabbit will enjoy being second best, even if they’re actively subordinate.

The most obvious sign that your rabbit is jealous is inserting themselves into your activity. If they feel they are not receiving enough attention, they’ll fight for it.

This could be while you’re handling another bunny. The envious rabbit will shuffle over and start nudging you with their nose. They may also emit an annoyed grunt.

The same will also apply if you are giving attention to a human. If your rabbit feels like it’s their turn, they’ll insert themselves into the moment.

A rabbit that’s jealous may also attract your attention in other ways. They could start eliminating in the home, acting aggressively, and behaving destructively.

You will need to watch how an envious rabbit behaves around other animals. If they show aggression to other pets, it shouldn’t be taken lightly.

Even bonded bunnies can fight tooth and nail if they become jealous of each other. This can permanently damage their relationship, and must be avoided.

Do Rabbits Get Jealous of Humans?

Many owners notice that their bunnies express jealousy toward their spouse or partner. If you’re attempting some human interaction, don’t be surprised if your rabbit gets in the way.

Bunnies are good at reading human emotions. They’ll pick up on surges of affection. Your rabbit may then become envious. They’re the ones that are supposed to make you feel this way.

A rabbit will often interrupt your one-on-one time with a significant other by insisting upon petting. This will need to be managed, as they may become aggressive.

Ensure that your rabbit enjoys sufficient attention at other times of the day. If they’re in an established routine, they’re more likely to accept that you have a partner.

Do Rabbits Get Jealous of Babies?

A new baby can be a surefire way to make a rabbit jealous. Babies are very distracting, and demand a lot of attentiveness. That’s all time that could be spent with your rabbit.

If you stop spending time with your rabbit in favor of your baby, they’ll start to act out. This will become problematic if you become lapse with their schedule.

Rabbits like to know that they’ll be fed and exercised at certain times. If you start to forget, they’ll resent the cause of these memory lapses. This could lead to your rabbit nipping and biting your baby, so oversee them.

Do Rabbits Get Jealous of Other Rabbits?

Envy between rabbits is most often directed at each other. If you have multiple rabbits, they must receive the same treatment. They’ll pick up on, and react to, any discrepancy.

Introducing a new rabbit to an existing bunny can cause feelings of envy. This is a tricky balancing act for any owner. While your rabbit will enjoy the company eventually, they’ll initially be suspicious.

Rabbits are territorial, and the long-standing bunny will be distrustful of the infiltrator. If you remove toys and give them to a new rabbit, these misgivings will grow.

The same applies if you spend more time bonding with a rabbit than entertaining the other. They’ll resent this new arrival that is taking all their attention.

Rabbits like to assert their dominance. If they’re jealous of another bunny, they’ll do this aggressively. They’ll nip, bite, mount and make a nuisance of themselves.

If you have two or more rabbits, manage their relationship carefully. Bunnies can be the best of friends, or mortal enemies. Make sure that they have no reason to envy each other.

Do Jealous Rabbits Get Behavioral Problems?

If your rabbit is jealous, they’ll become difficult to live with. The first incident that you’ll have to deal with is damage to your bond. Rabbits are not dogs. They do not offer unconditional love. You have to earn their adoration – and work to maintain it.

If your rabbit is jealous, they’ll start to act out. Think that a disgruntled rabbit is nothing to worry about? You’d be very wrong indeed.

You must look out for are signs of offense. The following signals suggest that jealousy has got the better of your bunny. You’ve offended them, and they now have an issue with you.

Rabbits in this state of mind become incredibly cantankerous. They’ll ignore your commands, become destructive, and even bite you unprovoked.

How Can Rabbit Jealousy Be Managed?

Jealous behavior in rabbits must be managed the same way as jealousy in children. You’ll need to be firm but fair, and offer reassurance.

You should take steps to prevent your rabbit from becoming jealous in the first place. All rabbits must be treated equally. If you favor one pet over another, your bunnies will pick up on this.

Left to their own devices, your rabbits will construct a power hierarchy by themselves. This is for your bunnies to decide. Leave them to it, and as long as they’re not hurting each other, accept it.

What you must not do is influence this hierarchy, or react to it. Treat all your rabbits the same. Rabbit power politics are their business, and irrelevant to how to treat them.

If you give one a treat, offer the same to another. If you’re petting one bunny, set a timer and provide the same attention to another. Speak to all rabbits in the same, soft tone of voice. Even if you have a favorite, you mustn’t let it show.

You should also consider having your rabbits spayed or neutered. It will also calm your bunnies down, as My House Rabbit explains. This, in turn, makes them less territorial.

Ensure that every rabbit in your home knows that you adore them. Rabbits may be bossy and moody, but they’re also insecure. Adoration from their owners can go a long way to fixing this.

How Can I Reassure My Rabbit That I Love Them?

Love language is vital to rabbits. They’re fearful creatures by their very nature. You would be too, if everything in the wild wanted to eat you.

Creating a comfortable environment for all your rabbits shows that you care. Best 4 Bunnies explains how you can do this:

Don’t make the mistake of believing that a rabbit is a low-maintenance pet. They are emotional, and know what’s what. If all your rabbits feel equally loved, you’ll have a better relationship.

It can sometimes feel like a paradox keeping multiple rabbits in the same home. On the one hand, bunnies grow lonely on their own. On the other, two rabbits can become jealous of each other.

It’s advisable to keep your rabbits together, especially once bonded, but also to treat them equally. No matter how many bunnies you live with, they must be considered part of the family.

If your rabbit doesn’t feel like they’re a priority, they’ll become jealous. Jealous of each other, or your spouse or children. Rabbits demand attention, and will act out of they don’t receive it.

Thankfully, when they do feel appropriately valued, bunnies are wonderful pets. You need to ensure they have their needs are met, on their terms.