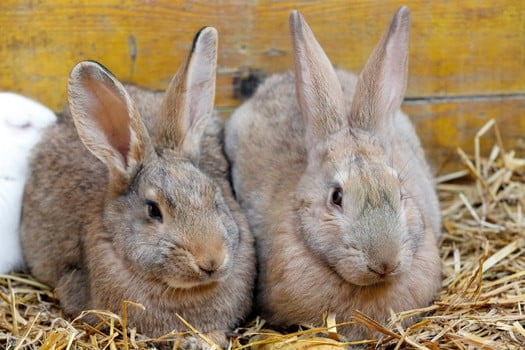 It’s no secret that rabbits frequently reproduce in the wild. This is because lagomorphs are driven by the desire to keep their species alive. These instincts also carry over to domesticated rabbits. Your pet rabbit will be keen to mate whenever she is in heat.

Most female rabbits enter a first heat cycle at around four months of age. After this, the rabbit never leaves heat. There will be times that she is more sexually active than others. A rabbit can breed at any time, but this is most likely to happen between March and September.

Spaying is highly recommended for comfort and health. Unless you breed your rabbit, there is no reason for her to endure constant heat cycles. The same applies to males, too. While male rabbits do not have a heat cycle, they are driven by a constant need to mate. Neutering eradicates this desire and calms your pet down considerably.

When Does a Female Rabbit Go into Heat?

Rabbits reach sexual maturity at a fast rate. How quickly this happens varies from pet to pet. Breed and size will come into play as large rabbits develop slower.

As a rule, a female rabbit will be sexually mature by the age of four months. This process will rarely take longer than six months.

A male, meanwhile, may become sexually mature within two or three months. Male rabbits are very driven by reproductive urges. This means that neutering must be looked into early on.

If two siblings reach maturity and live in the same hutch, mating will occur. Human constructs surrounding families do not govern rabbits.

Signs That a Female Rabbit is in Heat

If your rabbit is in heat, she will undergo some physical and personality changes. Some of these will be obvious and others less so. It pays to understand the warning signs, though. Once a rabbit enters heat, she never truly leaves it. The signs of a rabbit in heat include:

If you spay your rabbit before her first heat cycle, she may never experience these symptoms.  The logistics of this depend on when your rabbit matures, though.

Some vets will not operate on very young rabbits due to the risk. If you have to wait until your pet reaches adulthood, she will likely be sexually mature. Complete the procedure ASAP.

Do Male Rabbits Have a Heat Cycle?

Male rabbits do not have a heat cycle in the traditional sense. A male will not enter ovulation, like a female. All the same, males are compelled to mate almost 24/7. As soon as a male reaches maturity, he is driven by the urge to copulate.

This is why neutering males is so important. It’s arguably even more critical than spaying a female. An unfixed male rabbit will quickly become destructive. This will be a result of frustration.

If you see things from the rabbit’s perspective, this is understandable. As far as he is concerned, he has one job. He has to breed and expand the rabbit population. Preventing him from doing so is tantamount to cruelty.

Warning signs that your male has reached maturity, and is becoming frustrated, include:

There is no way around these behaviors beyond neutering your pet. This is not cruel. Your rabbit will be grateful. He’ll return to being the docile and loving pet he again.

How Long Do Rabbits Stay in Heat?

The heat sequence of a female rabbit lasts for around sixteen days. Your rabbit will be fertile for fourteen of these. This means that she will be open to the idea of mating. She may actively seek a partner if she shares a hutch.

Rabbit reproduction is different to most mammals. Rabbits do not ovulate and then seek a mate. Instead, a rabbit begins ovulating when mating starts. If a male mounts an intact rabbit, she’ll start to ovulate and release an egg.

Technically, the rabbit heat cycle never ends. Once a rabbit enters heat for the first time, it becomes a constant loop. Rabbits do not experience menopause either. Your pet will be in a heat loop until she is spayed or passes away.

This is because rabbits are driven by an instinct to procreate and sustain the species. Rabbits are prey to many other animals, and know it. Wild rabbits regularly mate for this reason. There is safety in numbers.

Domesticated pets are safe, but are still rabbits. This means that the same survival instincts govern your pet. Living in a hutch, and having every need catered for, makes no difference to their genetics.

Do Rabbits Have a Mating Season?

Domesticated rabbits are capable of mating all year around. Indoor rabbit bodies are not governed and regulated by the weather. Wild rabbits are likelier to mate at particular times of the year.

This is a matter of safety for the young. Baby rabbits are born without fur. A mother will not stay with her young, either. This is for the safety of the babies. The rabbit does not want to attract predators to a nest of defenseless kits.

A rabbit’s pregnancy lasts around thirty days. This means that a rabbit impregnated in December will give birth in January. In most countries, this will be the height of winter.

Without the warmth of a nursing mother, a wild baby rabbit will freeze in the winter. This is why wild rabbits tend not to mate between October and February.

At the onset of spring, rabbits notice the change in weather. Winter coats are shed and wild rabbits grow more excitable. This is the origin of the saying, “as mad as a March hare.”

This is irrelevant for domestic pets. While your rabbit will still shed fur according to the seasons, that’s it. Domesticated rabbits have less logistical concerns surrounding mating.

This is why you can buy baby rabbits from pet stores all year round. When a rabbit lives indoors, it’s ignorant to the seasons outside. The same will apply if you have pet rabbits inside your home.

Will Spaying a Rabbit Stop Her Going into Heat?

Spaying your female will drastically reduce the hormones in her body. This means she will not enter heat. Your rabbit will be calmer and easier to manage.

This goes double for male rabbits. All of the aggression and frustration associated with untapped sexual potential will evaporate.

Does this sound like you’re denying your rabbit one of life’s simple pleasures? You’re not. You are merely helping her become the pet she wants to be. Domesticated rabbits have no biological need to breed.

It is not a pet’s responsibility to maintain the species population. Spaying or neutering your rabbit eases this burden. You are removing unwelcome biological urges that serve no purpose in your pet.

Spaying and neutering have also been proven to improve a rabbit’s health. Cancer risk, especially in female rabbits, drops sharply after the procedure. In many respects, it is irresponsible not to spay or neuter at your earliest convenience.

Do Female Rabbits Bleed When in Heat?

Female rabbits do not experience periods in the same way as humans. This means that your pet will not bleed while in heat. If she does so, it suggests that something is wrong.

As The House Rabbit Society explains, this doesn’t necessarily mean that it’s life-threatening. Your pet may be producing discolored urine due to something she has eaten.

If the blood is not in your rabbit’s urine, seek help. No rabbit should ever bleed freely. This suggests your pet has injured herself in some way.

Is it Painful for a Rabbit to be in Heat?

Painful is perhaps too strong a word to use. There is no doubt that a rabbit in heat will be uncomfortable, though. A biological urge will drive her. Preventing her from acting upon it will make her life miserable.

She needs to mate in order to feel comfortable. If she is unable to do so, she will not be able to rest. The same applies to a male rabbit. He’ll be driven by an impulse that will not be calmed or tempered.

Spaying or neutering your pet is not mean. It’s the kindest thing you can do. Domesticated rabbits want to be pets. Eradicating unwelcome wild instincts helps them to achieve this goal.

Can a Rabbit in Heat Get Pregnant without Mating?

An intact male is required to impregnate a female rabbit. Insemination is essential, just like with any mammal. It takes two intact rabbits with the male mounting the female.

What’s more, this insemination needs to take place through active mating. If traces of rabbit semen are in a rabbit’s hutch, it will not cause pregnancy. All the same, it’s best to clean the hutch in the name of hygiene.

The same cannot be said about false pregnancy, though. A spayed female can experience a pseudopregnancy if mounted by an intact male. Even a neutered male can spark this reaction through mounting, though it’s less likely.

Will a Rabbit Go into Heat While Pregnant?

While your pet is pregnant, she will not enter heat. This is the one time she’ll be left alone by other rabbits. The same applies if she is experiencing a false pregnancy.

Despite this, the behavior of your rabbit will be similar to when she’s in heat. She’ll be moody and territorial. She’ll react with anger if you mess with her hutch, especially if she is nesting.

Also, be aware that it doesn’t take long for a rabbit to bounce back from pregnancy. Within three days, she’ll be in heat again. This will not go unnoticed by intact male hutch mates.

One unplanned rabbit pregnancy is unfortunate. Two is careless. Take the necessary steps to prevent this from happening again.

Female Rabbit is Spayed But Male Wants to Mate with Her

If you have spayed your female rabbit, you may think that she is safe from male attention. This is not the case, for two reasons.

Mixed-sex pairs of rabbits should never be kept together without the appropriate precautions. The relationship will potentially turn sour, and permanently damage a bond.

This could be a matter of establishing dominance. Female rabbits are often more territorial than males. If your pet has not been spayed, such instincts will become overpowering.

This behavior must not be ignored. You may think your rabbit is safe, as she cannot get pregnant. She can be tricked into thinking that she is, though. Any sexual stimulation can spark ovulation. A phantom pregnancy will follow.

As with male-female pairs, these behaviors will also likely cause fighting. Neither rabbit will want to back down and show weakness. The rabbits could even kill each other, if left to their own devices.

Spay any female pairs before they share a hutch. It will calm the rabbits down and ensure they’re the loving, docile pets that you hoped for. If you fail to do so, hormones will constantly drive the rabbits. This will not lead to a quiet life.

Rabbits live in a near-constant state of heat. That’s fine for wild rabbits. These animals eat, sleep, and reproduce. With domesticated rabbits, it’s a different story.

Your pet will not have the option to mate regularly. As a result, entering heat is a source of anguish. There’s no need to put your pet through it. So, you should get him/her fixed at an early age.