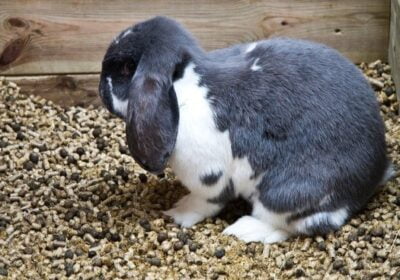 You will likely have seen your rabbit eating its poop. Though it may seem weird and disgusting, coprophagy is normal for rabbits. All rabbits eat their feces as it is an important part of the digestive process.

Rabbits’ digestive systems can’t extract all the nutrients from food the first time it is digested. During the digestion process, soft pellets called cecotropes are formed. These contain valuable nutrients, such as protein and fiber. Rabbits eat their cecotropes to extract these nutrients by digesting them a second time.

Normal rabbit droppings are dry, crumbly, and odorless. Cecotropes are soft, sticky, and pungent. They’re usually eaten directly from the anus, so you will see fewer of them in your rabbit’s hutch. We’ll look at why rabbits eat their cecotropes, and how it benefits their health.

Contents show
How Does a Rabbits Digestive System Work?
What Is Hindgut Fermentation in Rabbits?
How Do Rabbits Know Which Poop to Eat?
What Are the Two Types of Rabbit Poop?
Why Is My Rabbit Not Eating Cecotropes?
Why Is My Rabbit Eating Poop (Not Cecotropes)?
Related Articles:

How Does a Rabbits Digestive System Work?

A rabbit’s diet consists mainly of hay, which is made from dried grass. Hay is a low-quality food that, while high in fiber, doesn’t contain many calories or other nutrients.

This is why rabbits seem to be grazing on hay almost constantly. They need to consume a portion of the size of their body per day, but eating too many high-calorie foods is bad for a rabbit’s health.

Hay is also made primarily of fiber. Fiber is a vital nutrient in a rabbit’s diet, but it makes hay tough and difficult to digest. It’s not easy to extract nutrients, such as protein, from fibrous plant material.

Herbivores have developed ways of digesting hay and other fibrous plant materials. Some animals, for example, regurgitate partially-digested food (cud) and chew on it to help break it down.

Rabbits have a different method. It is called hindgut fermentation, and is shared by some other animals, including hares and pikas.

What Is Hindgut Fermentation in Rabbits?

When a rabbit eats, the food is broken down in the stomach by enzymes and stomach acid. It is then sent into the small intestine, where it is digested further.

However, rabbits’ stomachs and small intestines aren’t efficient enough to extract all the nutrients from tough plant materials. After they’ve done their job, a large quantity of undigested food remains.

This undigested material passes into the large intestine, where it is sorted into 2 groups. One group consists of indigestible fiber. The other comprises matter that still contains nutrients, such as protein and soluble fiber.

Any indigestible material is squeezed dry, formed into round pellets, and excreted. These are the normal rabbit droppings that you’ll see dotted around the cage. Rabbits produce lots of these droppings.

The matter that can be further digested is sent into a large organ called the cecum. Here, billions of bacteria eat away at the material, fermenting it and breaking it down further. This is hindgut fermentation.

Eventually, some materials can be extracted and reabsorbed into the rabbit’s body. Some, however, are not. This leftover material, which still contains valuable nutrients, is compacted into pellets called cecotropes.

These cecotropes are then expelled through the rectum. Cecotropes are not waste products, although they may resemble feces. They are a valuable food source.

As soon as the cecotropes come out, they are instantly reingested by the rabbit. This is called cecotrophy or coprophagy. They are then digested and broken down again, allowing for the extraction of many more nutrients.

How Do Rabbits Know Which Poop to Eat?

However, rabbits never eat their normal fecal pellets in this manner. They know that they don’t contain any useful nutrients, so there’s no need to.

Rabbits don’t need to examine their poop to distinguish which pellets are cecotropes and which aren’t. They can tell when they are pooping cecotropes, versus normal pellets.

When cecotropes are sent into the rectum, a neurological signal is sent to the rabbit’s brain. This signal tells them that cecotropes are on the way. They then instinctively start to consume them.

What Are the Two Types of Rabbit Poop?

As a rabbit owner, you should never discourage your rabbit from eating his cecotropes. They are a vital part of digestion, and an essential foodstuff for your furry friend.

Without ingesting cecotropes, rabbits struggle to get critical nutrients from their food. It’s crucial to recognize the different types of poop, so that you know your rabbit is eating his cecotropes.

Ordinary rabbit poop comes in the form of small, round, individual balls. They can vary between a pea and a chickpea. As rabbit poop is made primarily from hay, the color is usually light to medium brown. If your rabbit lives on fresh grass, it may even have a green tinge.

Rabbit droppings are very dry. They easily crumble between the fingers. If you break one open, you’ll be able to see a hay-like texture inside. Rabbit fecal pellets have hardly any scent. Other rabbits can smell them easily, but to humans, they are quite mild.

Individual cecotrope pellets are much smaller than rabbit fecal droppings. They are about half the size. They are also not perfectly round. Normally, cecotropes are expelled in groups, and they stick together. A bunch of cecotropes stuck together resembles a raspberry.

Cecotropes are a darker brown than normal droppings. They also have a soft, squishy texture. They are coated with sticky mucus. You will be able to smell a cecotrope. They are much more pungent than ordinary droppings.

Why Is My Rabbit Not Eating Cecotropes?

Rabbits should eat almost all of their cecotropes as they produce them. They contain essential nutrients that rabbits view as too valuable to waste.

According to research in PloS One, the ingestion of cecotropes also helps to balance rabbits’ natural gut flora. Cecotrophy reintroduces healthy microorganisms into the cecum to help with hindgut fermentation.

You should rarely ever see cecotropes just sitting around in your rabbit’s enclosure. It’s normal to see a few here and there, but not an excessive amount. If you suddenly notice more cecotropes than usual, this may be a cause for concern. It’s a sign that your rabbit has stopped eating them, or is eating far fewer cecotropes than normal. There could be many reasons why your rabbit is not eating cecotropes.

Rabbits should eat only grass hay, a small number of pellets, and a leafy green salad each day. Alfalfa hay is unsuitable for rabbits over a year old as it is too high in protein. Excessive vegetable consumption is sometimes an issue as rabbits will overeat if they can.

Why Is My Rabbit Eating Poop (Not Cecotropes)?

Although coprophagy is normal in rabbits, they are only supposed to consume cecotropes. It is unusual for a rabbit to eat dry waste droppings. Rabbit fecal pellets offer little in terms of nutrition. Where cecotropes contain valuable protein, feces contain only indigestible fiber and no water.

If you are sure that your rabbit his eating poop (not cecotropes), it’s time to assess its diet. A rabbit may eat its droppings if it does not have access to enough fiber from other sources.

Increase the amount of hay your rabbit has access to. Never let your rabbit run out of hay to eat as it can never have too much of it. You can also offer your rabbit hay pellets. These are more appealing to rabbits than hay as they are higher in calories. Choose a brand that does not have any added extras, like corn or colored pieces.

Make sure that your rabbit is consuming the right amount of leafy greens. They should be offered a portion of salad twice the size of their head per day. Good choices include parsley, arugula, cilantro, and dandelion leaves. If the poop-eating continues, your rabbit may be doing it out of boredom. Offer toys to play with and chew.

1 thought on “Why Do Rabbits Eat Their Own Poop?”