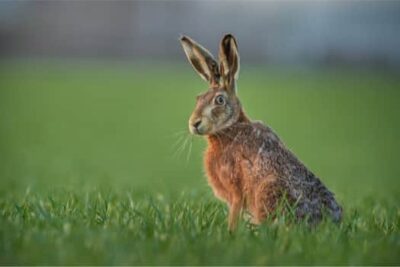 Hares vs. rabbits is a game that most children play while enjoying the great outdoors. These two terms are often used interchangeably to describe the same animal. But they are separate species with varying physical and personality-based traits.

Hares have much larger ears and hind legs than rabbits. Their ears also have a black tip. Hares are more nervous than rabbits, and live above ground rather than below. Some breeds of hare, such as the snowshoe hare, are carnivorous.

There are variations in lifestyle between rabbits and hares. Rabbits can often be found in large groups, but hares are more solitary. Rabbits and hares raise their young differently.

Contents show
Are Rabbits And Hares The Same Animal?
What Are The Differences Between Rabbits and Hares?
Hares are More Skittish Than Rabbits
Hares are Nocturnal While Rabbits are Crepuscular
Hares Have a Different Reproductive Cycle to Rabbits
Could a Rabbit Mate with a Hare?
Breeds of Rabbit And Hare in North America
Encountering Rabbits and Hares in the Wild
Should I Handle a Wild Rabbit or Hare?
Related Articles:

Are Rabbits And Hares The Same Animal?

Rabbit and hare are terms many people use interchangeably. Both are members of the lagomorph family of mammals, but they’re entirely different animals.

When you understand the distinctions between rabbits and hares, you’ll identify each species on sight. There are several variances, from the aesthetic to the behavioral.

Understanding the difference between a rabbit and a hare is more than just trivia. When acknowledged in their natural habitat, these animals will react differently.

What Are The Differences Between Rabbits and Hares?

Rabbits and hares are no more the same types of animal as sheep and goats. They may share similar living spaces, but there are fundamental disparities between the animals. The critical differences between rabbits are hares are as follows:

Hares Are Much Larger Than Rabbits

The size discrepancy is the easiest way to differentiate between rabbits and hares. Hares are usually the much larger of the two species.

This most commonly manifests in the ears and the hind legs. A hare’s ears are more prominent than those of a rabbit, and often have black tips. There is also no breed of hare with lop ears.

A hare’s back legs may also look slightly out of proportion with the rest of their body. This is because hares are faster and stronger than rabbits. They need these long legs to build up speed.

Both rabbits and hares subsist on grass, and whatever greenery they can access. Hares tend to prefer tougher substances, though. A hare is more likely to eat low-hanging fruit or wild seeds.

Hares also enjoy eating tree bark. It’s not unheard of for a hare to gnaw on a tree, like a beaver. They’ll also eat any fallen branches.

Perhaps the most significant difference of all, though, is that some breeds of hare are carnivorous. As National Geographic explains, the Snowshoe Hare is an example. These animals live in cold climates, and do whatever it takes to stay warm.

Hares that eat meat are primarily scavengers. They’ll find a corpse, and take what they can from it. This could even be another hare.

Another significant difference between rabbits and hares is where they make their home. Rabbits dwell underground, digging warrens. Hares prefer to nest in the open ground.

This is because hares are so much larger. They would struggle to fit into a warren. Digging one large enough would also leave them vulnerable to attack. It would just take too long.

Also, young hares are not as defenseless as baby rabbits. While the latter are born blind and hairless, baby hares are ready to leave the nest almost immediately. They are born with fur, and the ability to run and hop.

This doesn’t mean that a mother hare abandons her young. They will set off on their own adventures early, but return to the nest afterward.

Hares are More Skittish Than Rabbits

Despite their larger size, hares are not more dangerous than rabbits. As a rule, they’re just as gentle and docile. Like rabbits, though, they’ll bite if they feel threatened.

Thankfully, this will rarely be a problem. Hares are even more nervous than rabbits. It’s unlikely that they’ll ever let a human get close enough to threaten them. They’ll run away at the first sign of potential danger.

When a hare runs, they run fast. The Conservation Institute explains that a hare can reach speeds of 47 MPH when threatened. That’s almost as fast as a cheetah. This tendency for hares to easily spook is the origin of the idiom, “harebrained.”

This edgy nature makes hares less social with each other, too. Rabbits live in colonies. This way, they can look out for each other if danger approaches. Rabbits thump the ground to warn their underground friends that predators are close.

Hares prefer to look out for number one. When trouble rears its head, they show a clean pair of heels. As a result, while some hares live in pairs, most roam solo.

Hares are Nocturnal While Rabbits are Crepuscular

Rabbits come to life between dawn and dusk. They’ll emerge from their warren at daybreak, forage for food, then return. A rabbit then repeats this at sundown, going back underground when it gets cold at night.

Hares stick to a different routine. As they are larger, they can stay warmer in cooler temperatures. This means that hares seek food at night. They’ll eat their fill, and sleep it off during the day.

During the day, hares are vulnerable. To minimize risk, they camouflage themselves into their surroundings. This usually involves burrowing in the dirt, and sleeping in bushes.

Hares Have a Different Reproductive Cycle to Rabbits

Describing somebody acting erratically as, “mad as a March hare” is a reference to lagomorph breeding. Rabbits and hares do not breed between December and February.

This means that, by the time March arrives, rabbits and hares are hugely excitable and impulsive. Breeding season is the only similarity between the species, though.

Rabbits gestate their young for 30 days. They’ll then birth a litter as low as 4, as high as 12, or anywhere in between. Hares are pregnant for 45 days, and their litters are much smaller. It’s rare for a hare to birth more than 6 young at a time.

A baby hare is born ready for the wild. They’ll have fur, and they can see. Baby rabbits are helpless for the first week of their life.

The other fundamental difference is how rabbits and hares go about mating. Rabbits tend not to be fussy. Hares are pickier, though. If a female does not welcome a male’s advances, she’ll stand on her hind legs and box him away.

Even if the female is interested, she doesn’t make it easy. The male must chase her for several miles, as part of a mating ritual.

Could a Rabbit Mate with a Hare?

As rabbits and hares are different species, they will never mate together. Just being part of the same family is not enough. They remain as genetically incompatible as humans and primates.

A rabbit may still attempt to mount a hare, if their sizes are compatible. This is not done with mating in mind, though. Instead, the rabbit is trying to dominate the hare. Rabbits are bossy, and like to know that they’re in charge.

This will happen on the rare occasions that a hare enters a rabbit’s warren. Usually, these holes in the ground are too small. A frightened hare will go anywhere if it equals safety, though.

Naturally, the rabbits that dwell in this warren will not welcome an infiltrator. They will have worked long and hard to establish a hierarchy. This means the hare will need to be put in their place quickly.

Breeds of Rabbit And Hare in North America

Rabbit breeders import species of bunny from all over the world. When it comes to native rabbits and hares, though, pickings are slimmer.

There are 14 breeds of rabbit and hare native to the US. Learning the differences between them can lead to a great nature hunt.

This doesn’t mean that you will never see a different species of rabbit or hare in the wild. Non-native species invade new territories all the time. These are the lagomorphs that call North America home.

Encountering Rabbits and Hares in the Wild

While you’re in the country, you’ll encounter rabbits and hares going about their business. It’s best to leave them to it and not interfere.

You have to remember that the wild is an animal’s home. Respect this. Destroying a rabbit’s warren or hare’s nest is like somebody taking a sledgehammer to your home.

Sometimes, it seems that a rabbit or hare is keen to be picked up. Even if this is the case, think twice before doing so.

Should I Handle a Wild Rabbit or Hare?

If you’re enjoying a nature walk, few sights are more heartwarming than bouncing bunnies. Wild rabbits are best enjoyed from afar, though. Hares will be unlikely to even let you get close.

Sometimes, a wild rabbit may approach you. Bunnies are curious by nature, especially babies. The rabbit may even seem excited, and start to binky around you. This is still not an invitation to pick them up. This goes double for hares.

Wild rabbits and hares are not used to human handling. They will not know what your intentions are. You’re still much larger than them, and you’ll frighten them. This will result in one of three actions:

If you want a memento of encountering a wild rabbit or hare, settle for a photograph. Anything more is potentially dangerous for both you and the animal.

If a wild rabbit or hare bites you, make a non-emergency appointment with your doctor. You may need a Tetanus shot if it’s been ten years since your last booster.