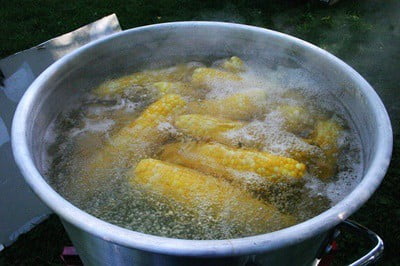 Rabbits love sweet treats, and some may wonder if sweetcorn can be on that treat menu. The answer is a firm no. Sweetcorn is not safe for rabbits to eat. A whole range of health problems can arise if they do. Besides that, sweetcorn offers almost nothing in the way of nutrition for a rabbit.

A rabbit should never be given sweetcorn in any form. Not only is sweetcorn high in sugar and starch, but it is not easy for a rabbit to digest. It can result in impaction or gastrointestinal stasis, as well as weight gain and cecal dysbiosis. All of these ailments have the potential to result in pain, discomfort, and even death. Sweetcorn poses too many risks to a bunny to even be considered a treat.

While sweetcorn itself is unsafe, there are parts of the sweetcorn plant that can be fed to a rabbit. The stalk, leaves, and husk (with the hair removed) are safe. Always be sure to wash away any pesticides or chemicals first.

A rabbit will probably eat sweetcorn if offered some. However, corn in any form isn’t safe for bunnies. To put it bluntly, rabbits get almost no nutritional value from eating corn. It’s the worst kind of junk food, and should really be avoided.

That may be surprising, as sweetcorn is technically full of many vitamins and minerals. These include vitamin B12, folic acid, and iron. However, rabbits are unable to glean these advantages. That’s because sweetcorn is packed too densely with sugars and starch. This will harm your rabbit long before it can benefit from the other nutrients.

Even still, the sweet taste may tempt an unsuspecting rabbit. In the wild, rabbits are not known to seek out sweetcorn. Nonetheless, many farmers and home gardeners have had their seedling corn plants demolished by wild, hungry rabbits. Despite sweetcorn’s softer texture than tough field corn, it’s still a danger.

Allowing your rabbit to eat sweetcorn poses a number of health risks. These include gastrointestinal stasis and impaction. For rabbits, there are actually very few benefits to eating corn.

Rabbits appear to have quite the sweet tooth, especially when it comes to treats. Sweetcorn, as you might expect, is quite sweet. However, that comes from its high sugar content, as noted by the Journal of Heredity. So, while your rabbit may enjoy sweetcorn, it should not be provided any to eat.

Other foods with relatively high levels of sugar can be fed infrequently as treats. These include bananas and strawberries. However, any food high in sugar is not healthy for a rabbit. The above fruits only get a pass because of their other advantages. Even in that case, they should be rare treats.

Can Rabbits Eat Corn On The Cob?

Rabbits cannot eat corn in any form, including on the cob. This is because:

A rabbit’s gut is fantastic at breaking down grasses and herbs. However, it’s terrible at breaking down hard grains or tough fibers. The potential for impaction increases drastically if even small pieces of the cob are eaten.

Can Corn Cobs Be Dental Toys For Rabbits?

It may be confusing to learn that corn cobs are dangerous to rabbits. After all, aren’t rabbits given corn cobs as toys? Shouldn’t they be great for a bunny’s dental health?

This is a common misconception. There are dental toys that can provide an abrasive surface for your rabbit to chew on. However, they should never be corn cobs. Yes, a rabbit needs to constantly wear its teeth down to prevent overgrowth. As stated in the Journal of Experimental Zoology, a rabbit’s incisors and molars grow between 1.3mm-3mm a week.

Even still, corn cobs do not have the right abrasive texture for wearing down teeth. The wooden column is too dull and soft. Instead, the rabbit will chip away pieces and ingest them. This may be on accident or on purpose. In both cases, the rabbit is likely to experience impaction or other digestive issues after consuming the pieces.

So, rabbits can’t eat the sweetcorn itself or the cob. What about the plant itself? The stalk and leaves of the sweetcorn plant are safe for rabbits to eat. However, there is little about these parts that a rabbit will find tempting. Your bunny may only nibble lightly on the food.

Of course, you should be worried about pesticides and other chemicals on the plant. The sweetcorn itself is protected from these harmful chemicals by virtue of the husk. In contrast, the leaves and stem are heavily exposed. Washing with water may still leave trace amounts. These harsh pesticides can be quite dangerous to a rabbit.

If you grow your own sweetcorn without chemicals, that’s a different story. Just make sure that the leaves and stalk are fresh. In this case, a rabbit can safely eat those parts of the plant.

Now, the corn husks are also edible. These are the green, leaf-like parts wrapped around the corn. Rabbits appear to enjoy snacking on these. Be sure to remove the silky hairs, though, as they can be a choking hazard.

Canned sweetcorn is just as bad for rabbits as fresh and cooked sweetcorn. It will be less dangerous than field corn kernels. This is because it’s much softer and less likely to create impaction. However, that doesn’t change the starch and sugar levels within them. Canned sweetcorn kernels are hazardous even when cooked.

Additionally, canned sweetcorn may be sealed in liquid that contains preservatives and sugars. These are not ideal for a rabbit to ingest. The extra sugars can result in weight gain. Even worse, they can upset the gut flora of your rabbit’s digestive system. This is because the preservatives are designed to give canned corn a long shelf-life.

Baby sweetcorn is high in sugar and starch, like all corn. Regularly eating baby sweetcorn introduces a massive amount of unnecessary calories into the rabbit’s diet. This causes quick weight gain. After that, the amount of sugar and starch can upset the delicate bacteria colonies that inhabit a rabbit’s digestive system. This is true even when used as a rare treat. That’s where the risks of feeding a rabbit sweetcorn become apparent.

There are many risks to feeding rabbits sweetcorn. Some bunny owners may plan on introducing sweetcorn into their rabbit’s diet anyhow. If you want to try it, beware the dangers.

Sweetcorn kernels can pose a choking hazard to young or small rabbits. However, it’s usually the much tougher field corn that has the potential to block the throat. Field corn is sweetcorn that has fully matured and dried before being harvested. Sweetcorn is harvested early, before the starches have time to fully develop. The pericarp will still be soft. Cobs are a choking hazard to rabbits of any age or size.

By virtue of being harvested so young, baby sweetcorn is much softer. The cob of this young corn hasn’t had time to even begin toughening up. As such, it’s completely edible. Rabbits may not choke on baby sweetcorn.

Rabbits normally pass two types of feces: soft cecotropes and hard pellets. Cecotropes are produced in the cecum, a part of the intestinal tract. Within this cavity are very delicate colonies of yeast and bacteria that aid in the digestion (and fermentation) of food. This bacteria also prevents harmful bacteria from growing out of control. On a healthy diet, the good bacteria and yeast thrive.

The sugars and starches in sweetcorn can very easily upset these bacteria. Yeast loves sugar. Introducing ample sugar into a rabbit’s diet will cause yeast colonies to go wild. This, in turn, can impact the bacteria colonies. Starch, on the other hand, is indigestible.

Undigested starches will continue to ferment in the gut and cecum. Here, it may encourage an explosion in nasty bacteria. The result will be cecal dysbiosis.

At times, cecal dysbiosis can be resolved by putting the rabbit on a healthy diet. The fiber in the grass hay will encourage the gut to pass all of the sugars and starches. In other cases, medication may be required.

Gastrointestinal stasis is when food matter slows or stops moving through the gut. Much like cecal dysbiosis, stasis is caused by an imbalance in the delicate gut flora. This causes the intestines to seize.

Additionally, an obstruction can cause stasis to form. That’s what corn kernels can very easily become. A blockage can be immediate. It may also grow over time, as a small piece of food gets stuck and catches more and more food with every meal. Eventually, it will form a plug.

When either of these scenarios occur, food digestion is halted – or put into stasis. As food stops moving through the digestive tract, harmful bacteria grows. This will produce gasses that cause painful bloating. That will discourage the rabbit from eating or drinking, which only worsens the stasis.

Since sweetcorn is loaded with sugar and starch, the risk is high. Gastrointestinal stasis of varying severities can form easily. Stasis can be fatal if left untreated.

Obesity is a common issue in household pets when given one too many treats. This includes rabbits. Sweetcorn’s high sugar and starch content will cause a rabbit to quickly gain weight. This is true if eaten even 1-2 times a week. Obesity puts a rabbit at risk of secondary health issues, such as:

An overweight rabbit will also suffer lifestyle changes – for the worse. This might include:

An obese rabbit also carries fat in places that can make eating, drinking, and defecating difficult.

Impaction is when the digestive or intestinal tract is blocked. Impaction can be both cause or be caused by gastrointestinal stasis.

Sweetcorn is not easily digested by rabbits. As such, sweetcorn can easily cause a blockage to form in the intestines or cecum. This prevents matter from being passed. The matter rots in the gut, filing the intestinal chambers with gasses and harmful bacteria.

Severe bloating and a distended abdomen will result. Death is possible without treatment. Surgical intervention may be required. This depends on the severity of the blockage and ensuing stasis.

There are some foods that should never be fed to a rabbit. Even if your bunny seems to think otherwise, this includes sweetcorn.

Sweetcorn offers so little in the way of nutritional value, even for a treat. As such, the risks certainly outweigh any perceived benefits. High in sugar and (indigestible) starch, sweetcorn will cause health issues. For example, impaction, stasis, and weight gain. No rabbit owner wants a beloved pet to suffer all that. So, keep sweetcorn on your dinner table and not in your rabbit’s food dish.