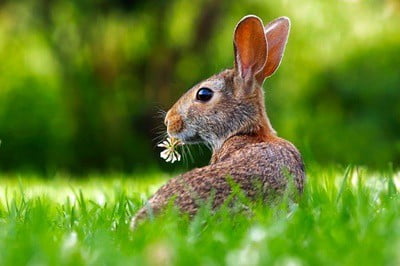 Despite being easily frightened creatures, rabbits always know to dart away if something suddenly creeps up behind them. This can seem like confusing behavior, as rabbits barely even turn their heads. It’s easy to assume they have a poor field of vision, but this isn’t actually the case.

Rabbits can see behind themselves without turning their heads as they have almost panoramic vision. They can see in virtually every direction due to the structure of their eyes and their placement on the skull. It allows a rabbit to quickly spot predators from most angles.

In the wild, remaining still while viewing your surroundings is crucial. Rabbits don’t need to move their heads in order to see in most directions. However, they do have blind spots and mild issues with depth perception.

Can Rabbits See Behind Them?

Rabbits have one of the best fields of vision. They are able to see almost 360 degrees. As such, they can see behind them, but also up, down, on both flanks, and ahead of them. A rabbit won’t even need to tilt its head up to watch the skies or see its owner smiling down on it.

If you walk up behind your rabbit, it won’t give any physical indication that it can see you. It doesn’t need to move its head or twitch its eyes. So long as you’re not in its blind spots, you can rest assured. If a rabbit chooses to hold still or to run, it’s not because you surprised it.

On top of that, rabbits also tend to be farsighted. This means they can see objects or animals from far away with clarity. That includes anything up, down, side to side, ahead or behind. In fact, rabbits are more likely to notice an airplane before you will, even if they’re lower to the ground.

A rabbit’s eye placement is incredibly important. While a human’s eyes are forward-facing, a rabbit’s sit on either side of its head. A human needs to turn its head to give its eyes access to new angles. However, a rabbit has those angles readily available from the get-go.

Creatures with binocular vision (like humans) are granted better depth perception in their entire field of vision. We may not know what is happening behind us, but we are excellent at seeing what’s in front of us.

In contrast, rabbits have monocular vision. They can see two different objects at one time, since their eyes are pointed in two different directions. Match that to their farsightedness, and rabbits are good at navigating the world. They can see predators from most places around them, and at impressive distances.

However, there is a downside. Rabbits do not have good color vision or depth perception. Farsightedness helps them spot animals at a distance. Anything right in front of them might be blurry and difficult to view.

Aside from their monocular vision, rabbits have even more unique eye placement. For example, unlike horses, rabbits do not have eyes placed directly on either side of their head. Instead, a rabbit’s eyes are placed higher up on the skull. This lateral placement is expected in prey animals.

That’s because it improves their range of vision; they don’t have their own body blocking a good amount of their sight. It also boosts their ability to see the skies, where birds of prey hunt.

In the home, this makes it easy for your bun to notice you walking nearby. If you wave at your bunny from above, don’t worry – it can see you fine.

Can Rabbits See Clearly Behind Themselves?

While we’ve determined that rabbits have good vision, there are negatives.

Monocular vision gives rabbits one weakness: two small blind spots. The first spot is located right in front of their eyes. It encompasses about 10 degrees of their vision. This is why rabbits often do not seem to see food if you place it directly in front of them.

A matching blind spot is located directly behind them. However, this blind spot is rarely a problem in the wild. After all, rabbits are small, and predators tend to be big. There is little chance that the 10 degrees they cannot see will stop them from spotting a predator.

Rabbits can also make up for this blind spot with their other senses. In particular, bunnies are sensitive to vibrations. Their ears can pick up on the softest of noises. With such excellent hearing, rabbits have no need to see a creature in order to evade it.

Likewise, their sense of smell will allow them to understand there’s a yummy treat right before them. Even if a rabbit can’t see it, it will know to explore and eventually taste it.

Rabbits may have a wide range of vision, but do they have depth perception?

Monocular animals, like rabbits, only have a bit of depth perception. This exists only where the vision of both eyes overlaps. Since each eye looks in different directions, the ‘shared’ vision is pretty small. This is about 30 degrees in front of them. Additionally, their first blind spot exists within this area.

According to Physiology and Behavior, rabbits excelled in activities that required depth perception. This is due to their head-bobbing behavior. A rabbit won’t need to move its head to see an object, but this may be required if the bunny wants to gauge the distance. It will nod up and down, and then judge how the object it’s viewing moves in response. This gives it an idea of the distance.

Do All Rabbits Have Panoramic Vision?

The placement of their eyes, paired with their monocular vision, allows rabbits to have almost panoramic vision. In other words, they can see in nearly 360 degrees. However, this isn’t true for all rabbit breeds. There are some which have a less impressive range of vision.

For example, giant rabbit breeds can still see behind them without moving their heads. However, their sight is more limited than with smaller breeds. Rabbits of this size will have a significant blind spot behind them.

Consider how a rabbit’s hips and back legs are larger than the front of its body. Its blind spot may resemble a triangle stretching out. That will match how its own body broadens and blocks its view.

The shape of the torso will play a role in how complete a rabbit’s vision is. Bulky rabbits will have their own shoulders and chests bulging out. This makes it difficult for their eyes to see past.

With that said, rabbits with the same body type as the wild European rabbit will have more complete panoramic vision. This is in part due to the shape of the skull. Thinner, more pointed skulls allow those high-sitting eyes to perch at a prime location.

Other Animals with Panoramic Vision

Rabbits aren’t known for their vision. That’s undeserved since they’re one of three animals with panoramic vision:

How To Work with Your Rabbit’s Vision

So, what does vision mean when you’re interacting with your rabbit? Here’s what to keep in mind:

Rabbits Will Likely Look from The Side

Most owners notice that their rabbits do not look at them head-on. Instead, rabbits prefer to sit parallel to their owners. In this way, rabbits appear to look at you from the side instead of from the front.

To the rabbit, this sideways glance lets it see you more fully. Remember, rabbits have a blind spot in the middle of their eyes. By looking at you sideways, it’s the same as a human looking at you head-on.

Be Aware of Your Rabbit’s Blind Spot

You may notice that your rabbit doesn’t appear to see food right in front of it. Chances are, that treat you’ve offered falls into its blind spot. If it can see the food at all, it’ll only be catching a glimpse.

Your rabbit’s sense of smell will usually compensate for this. However, if it’s unfamiliar with the treat or it doesn’t have a strong smell, the bunny will need its eyesight. In this case, be mindful of your rabbit’s blind spot. Hand your bunny food from the side of its face, instead of directly ahead.

Don’t Pet Your Rabbit from The Front

When petting your rabbit, try not to pet it directly from the front or on the top of its head. Instead, it’s best to approach from the side of your rabbit. This allows it to see you coming.

Even if it’s fully aware that you’re there, physical touch it can’t see may be upsetting. Make sure your rabbit can track the motion of your fingers or any toys you prod it with. This can make your rabbit calmer and more comfortable.

A rabbit’s vision is fascinating. However, it comes with a few disadvantages as well. Understanding how rabbits see the world can help you understand and bond with your rabbit.