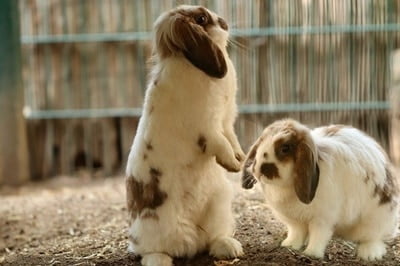 While rabbits are quieter than most other pets, their expressive body language will tell you what they feel and what they want from you. This occurs when rabbits stand up on their hind legs.

Rabbits stand on their hind legs to get a better view of their surroundings. Rabbits are curious creatures by nature, and this higher elevation helps them to familiarize themselves with their territory. In the wild, a rabbit standing up on its hind legs is usually looking out for predators. However, a domesticated rabbit may stand on its back legs to get your attention or beg for treats.

A rabbit’s body language is relatively simple to interpret. With careful observation, you can easily understand what a rabbit wants and how it feels, leading to an even closer bond between you.

What Does It Mean When a Rabbit Stands on Its Back Legs?

The domesticated rabbit loves to explore every inch of its environment, not only for fun, but to map out the best routes to run back to its burrow. However, the rabbit is also a prey animal, so it must always stay alert for any predators lurking nearby.

UC Davis states that if a rabbit is standing on its back legs, it is trying to get a better look at what is going on around it. This behavior, coupled with turning its head, sniffing the air, or tilting its ears around to catch far-off noises, can better help a rabbit avoid predators in the wild.

A domesticated rabbit, on the other hand, will also stand on its back legs for other reasons besides checking out its home. Once your rabbit becomes more comfortable in its new environment, then it may stand on its hind legs to try and see what you are doing.

It is also a rabbit’s way of getting your attention because it wants treats or petting. A rabbit will also stand up on its back legs if it becomes scared by something, so a novice rabbit owner may not be able to tell the difference.

Being able to read a rabbit’s body language is the key to better understanding how it feels about you and its new home. That being said, some new owners may not know what signs to look for.

How can you tell when a rabbit is standing on its hind legs out of curiosity and when it is doing so because it senses a threat?

What Do Rabbits Want When They Stand Up?

Most of a rabbit’s body language is demonstrated with its ears. A rabbit’s ears can tilt at around 270 degrees, with both able to move individually from the other.

This not only lets a rabbit pick up on multiple noises from far away, but this also helps it determine where exactly that noise came from. How a rabbit tilts its ears can also show you how it feels:

If your rabbit’s breathing has not become quicker while it stands on its hind legs, then it is merely curious. It may also be begging for treats or trying to get your attention.

This behavior is usually accompanied by circling around your feet first or standing on its back legs then gently placing its front paws against your leg.

The University of Georgia found that a rabbit that is raised around humans and encouraged to explore novel environments tends to exhibit bolder behavior. This includes a rabbit being comfortable enough around humans to move closer to them, hopping around without a care, and standing on its hind legs to explore the area.

Conversely, a rabbit who exhibited fear or alarm laid flat against the ground and hardly moved at all. A rabbit’s breathing might also become quicker in its panic and its eyes might be wide open. Rather than stretch up on its hind legs, it may instead stomp to demonstrate fear or aggression.

Why Do Rabbits Thump Their Hind Legs?

A rabbit will use its hind legs to indicate other types of behaviors as well, mainly fear or annoyance. The most common of these is when a rabbit will stomp one of its back legs with a very audible thumping sound.

This thumping occurs when a rabbit feels afraid or stressed out. In the wild, it can also alert other rabbits to danger nearby. When this happens, you should do your best to comfort your rabbit until it calms down again.

A rabbit hopping around isn’t anything new, but if this is accompanied by a pointed flicking of its back feet as it hops, then your rabbit may be annoyed with you. Try to give it a little space to cool off or tempt it back into your good graces with a small fruit treat or a relaxing petting session.

Additionally, a much bolder rabbit will stand up on its back legs and “box” at you with its front legs. This indicates that your rabbit is so angry that it is willing to fight you, or at the least deter you from coming near. Again, it is best to back off for now and soothe your rabbit after it has calmed down.

How Strong Are a Rabbit’s Hind Legs?

According to the Journal of Morphology, a rabbit’s hind leg musculature is built for force production and large excursions.

Basically, a rabbit’s hind legs are powerful not just because these appendages can produce a large amount of force, but because the bulk of its muscle mass is located in the knees. Because of this concentration near the joints, a rabbit is then able to travel long distances without expending much wear on its knees or muscles.

Additionally, the fur on a rabbit’s hind legs is much denser than its front paws. This acts as a cushion of sorts, making it even easier for it to cover long distances in a shorter amount of time.

A rabbit’s back legs can leap great distances and run at speeds of up to 18 miles per hour. This is especially important for a wild rabbit that needs to run from predators back to the safety of its burrow at any moment’s notice.

This also helps your rabbit to stand on its back legs without any issue. Its inherent leg strength helps it hop up onto tall surfaces like your sofa or bed without straining or injuring itself as well.

Can Rabbits Walk on Their Hind Legs?

Though rabbits can stand up on their back legs, this does not necessarily mean they can walk on their hind legs.

Rabbits are quadrupeds, which are creatures that walk on four legs. When rabbits stand at ease, they normally balance their weight on all four paws and hold their heads level with the top of their backs. This is because they are built to hop not walk.

In the wild, a rabbit stands on its back legs to map out its terrain. This also helps it check for potential predators. A pet rabbit will stand on its hind legs to look at its new home, as well as begging for attention and food.