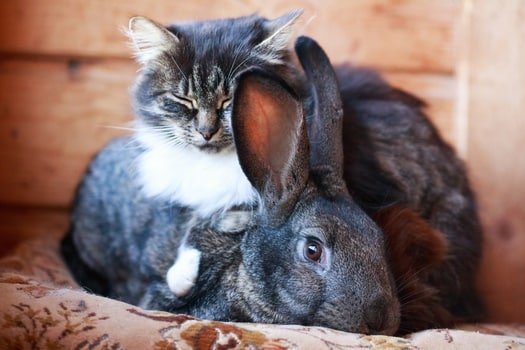 Cats and rabbits are not natural housemates. Cats are instinctive predators, and rabbits are prey animals. This will automatically raise alarm bells for any prospective pet owner. That doesn’t necessarily mean that putting cats and rabbits together is doomed to failure from the outset.

Introducing a cat to a rabbit while they’re young increases your chances of a successful inter-species bond being formed. If two animals grow up together, they’ll look past any rivalry and play together contentedly. Older pets are less likely to be accepting of each other’s differences.

You also have to remember that cat and rabbits are both territorial. This means that you’ll need to manage their dynamic, and ensure that neither pet grows jealous of the other. This guide looks at the process of bonding a cat and rabbit, and running a successful multi-pet home.

Can Cats and Rabbits Live in the Same House?

If you’re wondering whether cats get along with house rabbits, the answer is that it’s possible. These animals can happily co-exist. They can even become friends, given the right circumstances.

Despite this, cats and rabbits should never be left alone unsupervised. Even if they seem to have bonded, they are still animals and governed by instinct. A cat could turn on a rabbit in an instant.

That’s not to place all of the blame for a potential incident on a cat, either. Rabbits are extremely dominant and hierarchal. This may lead to them pushing their luck with their feline friend.

If you expect a cat and rabbit to share a home, you’ll need some house rules. When both animals know where they stand, they are much more likely to get along.

How to Encourage Cats and Rabbits to Live Together

To keep your cat and rabbit happy, you’ll need to meet the needs of both pets. Cats and bunnies are similar in many respects.

Both species are territorial. Neither animal enjoys any change to their routine. Perhaps most importantly, both become jealous if they feel they’re not the center of attention.

The critical steps to a harmonious household that contains cats and rabbits are as follows:

It’s easier if you bring a bunny and cat together when both animals are young. Both pets will be more adaptable in their early years. Equally, if they grow up together, neither will be able to appreciate life without the other.

You can still make it work with adult animals. You’ll need to manage the introductions carefully, and be vigilant about watching them.

Introducing a Rabbit to a Cat’s House

Before you bring a rabbit into a cat’s home, think carefully about whether it’s suitable. Does your cat play well with other animals? If they’re territorial with everybody and anybody, they may be best off as an only pet.

If you’re confident that this dynamic can work, you’ll need to be patient. When you first bring your rabbit home, set up with a substantial hutch.

The key word here is substantial. Your rabbit will be housebound for a few days, so they’ll need plenty of room to run, jump and play. The Rabbit Welfare Association discusses the appropriate size of a rabbit home.

Keep your rabbit in their hutch for a few days. Let the cat approach, and learn the rabbit’s smell. Oversee this. If the cat tries to get into the hutch, correct the behavior and take them away.

Once the two animals exhibit equal levels of curiosity, carefully introduce them for playtime. Don’t expect your cat and rabbit to start bonding immediately. Simply not attacking each other is a win in the first instance.

Over time, you can start letting your cat and rabbit more without the confines of a cage. Just be vigilant about watching them, and separate them at the first sign of conflict.

Your two pets may become inseparable– it is possible for opposites to attract. Even if they’re indifferent to each other, call that a win. As cats and rabbits are both territorial, they’re showing remarkable willpower to leave each other alone.

Introducing a Kitten to a House Rabbit

If a bunny is an incumbent pet and you’re introducing a kitten, the situation remains precarious. Your rabbit will be used to their freedom, and will be suspicious of this interloper.

The good news is that kittens are just as social as rabbits. This means the two pets are likelier to iron out their differences and become friends.

You’ll need to get your kitten comfortable. This means slowly and steadily introducing them to the house, one room at a time.

A new home is overwhelming for a cat. Throw a territorial bunny into the mix and they’ll be terrified. Don’t introduce the animals until the kitten is confident.

Once you’re ready to introduce the animals, pick a room that neither pet is familiar with. If that’s not an option, make it an unknown location to the rabbit. This way, they’re less likely to be territorial and aggressive.

From there, stand back and watch like a hawk. Let the two pets smell each other, and feel each other out. If they start to fight, separate them at once. If not, let them interact for a few minutes and repeat the trick the next day.

This will take patience, but eventually, the two pets will grow to tolerate each other. If you’re lucky, they’ll even bond and play together.

Introducing an Adult or Senior Cat to a House Rabbit

In truth, an adult cat is much more likely to struggle in this situation. Older cats have had more time to hone their hunting, and they’re less interested in play.

Senior cats are unlikely to adapt well. The change in living arrangements will already stress them. A new, potentially cantankerous, housemate to contend with may push them too far.

It’s always possible that a cat would attack a rabbit. After all, these two animals are natural enemies in the wild. When you add feline hunting instinct to the equation, conflict is likely.

This could happen at any moment. Even if your cat and rabbit seem to have bonded, you can’t get complacent. Cats can turn at a moment’s notice, especially if frustrated.

The best way to prevent cats from attacking rabbits is by tempering their instincts in other ways. This can be done through play.

Felines only play one game – stalk, hunt, and capture. Every cat toy you’ll find in a pet store is designed to appeal to this predisposition. 20 minutes of playtime will exhaust your cat, and keep their hunting drive in check.

As a result of this, your cat is less likely to chase your rabbit. If they do start a pursuit, you’ll need to separate them quickly.

One of two things will happen if your cat chases a rabbit. The bunny may stand their ground, which will intimidate your cat. Alternatively, they may panic and flee. This will get your cat’s blood up.

Once a rabbit is marked as prey to your cat, they won’t be able to control themselves. They’ll give chase until they get what they want. Even if your rabbit escapes, they’ll be terrified of your cat forever more.

As The House Rabbit Society explains, bunnies are equally likely to be the antagonist in this relationship. This may sound funny at first, but it’s no laughing matter. An aggressive rabbit can make life miserable for a cat.

When a rabbit feels confident and comfortable in their home, they’ll become territorial. They’ll wander around like they own the house, marking territory as they go. Sound familiar? That’s right – it’s precisely the same behavior as a cat. Naturally, this can lead to a clash.

The difference lies in how far a rabbit will take things. A cat may try to intimidate a bunny. Most of the time, a confident rabbit will bare their teeth and threaten them right back.

This will deter a cat from going any further. They don’t need that kind of a hassle – they’ll find easier prey. The bunny may want to drive their point home though.

This can lead to a rabbit chasing a cat, attempting to show their dominance. They may bite at a cat’s tail, or even try to mount them. This will provoke a fight-or-flight response.

Neither of these will be favorable. Your cat will forever be scared of your rabbit, and they’ll live in fear. Alternatively, they’ll instinctively fight back – and probably win the battle.

Can Cats Get Sick from Rabbits?

It is possible for a cat to become sick when a rabbit is unwell. This usually arises when the two animals share parasites.

Fleas will gleefully jump from rabbits to cats, and back again. If the bunny is sick, the flea can then pass the infection onto your cat. Other biting insects, such as mosquitos and ticks, can have a similar impact.

The biggest health concern involving rabbits and cats via insect bites is tularemia, aka rabbit fever. As Pet Health Network explains, this is a bacterial infection with variable symptoms.

Rabbits can also infect cats with respiratory sickness through proximity. If your bunny has snuffles, for example, this can manifest in a cat as Bordetella bronchiseptica.

If your rabbit is living with ringworm, this will also be contagious to cats. In such an instance, you should quarantine your rabbit until they recover.

Of course, all of this works in reverse too. These are known as zoonotic diseases, meaning they are intra-species infections. This means a cat is just as likely to infect a rabbit if infected.

It’s arguably more concerning. Rabbits have weaker immunity than cats, and are more likely to struggle with infection. Avoid interaction between animals if one of your pets is unwell.

How to Keep Cats Away from Rabbits

It’s always possible that your cat will look to stalk and hunt your rabbit. This is especially likely if your cat chases wild bunnies. Cats cannot just ignore millennia of hardwired instinct.

You’ll need to secure your rabbit’s home. Ensure the hutch has a roof, and any bars are too narrow to accommodate feline paws.

Your cat can still terrorize your bunny from outside their hutch, though. Felines are patient, and may sit and wait for hours. This will terrify your poor rabbit, causing them no end of stress.

Avoid this by applying cat-deterrent scents and sensations around your rabbit’s hutch. Citrus aromas are best for this. Rabbits are not crazy about citrus either, but they cope with it better than cats.

Cats also dislike the sensation of stickiness beneath their paws. Double-sided sticky tape can be a great deterrent. Apply this to the ground around your rabbit’s hutch, and on it if necessary.

This doesn’t change the fact that your rabbit will need exercise outside their hutch. Create a safe area in your garden, and let them out for at least 2 hours. Ideally 4.

Your cat must be locked inside during this period. While being chased will undoubtedly inspire your rabbit to run, it’s not beneficial to either animal.

Cats and rabbits are not natural bedfellows, but this doesn’t mean that they’re enemies. Many felines and bunnies find common ground in the home, under the right circumstances.

Naturally, it’s a relationship that you’ll need to manage carefully. These two animals are always at risk of throwing away a friendship in a moment.

Watch your cat and rabbit, and ensure that both pets feel equally loved and valued. That’s the key to a happy and harmonious dynamic. And remember, your pets don’t need to be best friends. Simply co-existing is a great relationship between a rabbit and cat.

4 thoughts on “Do Rabbits and Cats Get Along Together?”