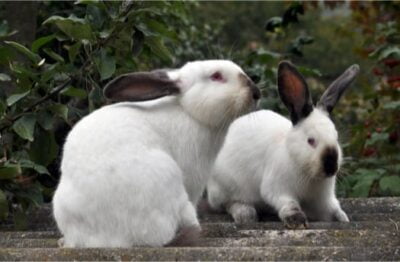 Take a walk through the country and you’ll find rabbits grazing on grass. Speak to a farmer, and you’ll learn that rabbits eat their fresh greens. It would appear that bunnies have a taste for greenery. As such survival-driven animals, perhaps they may need to think outside the box on occasion.

Rabbits cannot digest meat, so it will make them sick. A rabbit’s digestive tract is designed to process vast amounts of fiber and limited protein. Rabbits get fiber from hay, and protein from pellets.

Even wild rabbits are vegan. Some hares scavenge as a survival mechanism, but rabbits are a different species to hares. Some female rabbits eat their young, but this is very rare. This guide explains how to meet your rabbit’s dietary requirements.

What Do Wild Rabbits Eat?

Rabbits in the wild are dedicated herbivores. They survive on a steady diet of anything green. The most common delicacy of a wild rabbit is grass, though.

When you’re walking and find a rabbit warren, it will be in a dense, green area. This is not an accident. Rabbits need to eat a substantial amount of grass to survive. This means that they’ll build a home close to their food source.

Wild rabbits will also tuck into flowers or fresh fruit and vegetables if available. This can be a source of constant consternation for farmers and landowners. Bunnies are not intending to be destructive. They’re just trying to stay alive.

During the winter, wild rabbits adapt their diet slightly. They prefer their greenery fresh, and many plants die in the cold. As a result, rabbits gnaw on twigs and tree branches. They even climb trees to gain access to appealing food.

What Do Pet Rabbits Eat?

If you bring a rabbit into your family, their diet is similar. You’ll need to replace grass, though. It is impossible for domesticated rabbits to eat as much as they would in the wild. As a result, a pet rabbit’s diet is divided into three parts:

Rabbit pellets have a lot of plus points. They provide a bunny with appropriate levels of protein and calcium. This helps a baby bunny grow their bones. Rabbits can eat unlimited pellets until they’re around six months old.

What rabbit pellets do not contain is fiber. This is the most crucial element of all for a bunny. With fiber, a rabbit will struggle to maintain a healthy colon.

Hay provides fiber, which is why this must be provided alongside pellets. Pellets must never be a rabbit’s only source of nutrition. They form a smaller portion of an adult rabbit’s diet. A quarter of a cup per 6 lbs. of body weight is enough.

Another issue with pellets is that they must be fresh. Rabbit pellets go moldy if not stored appropriately, or left open too long. Mold can kill bunnies.

If you are going to feed your rabbit pellets, buy small quantities. You’d have to replenish your supply frequently, but smaller bags are less likely to go off.

Unlike pellets, a rabbit can never have enough fresh hay. This is the primary replacement for grass in their diet. A pet rabbit will happily graze on hay all day.

Purchase the highest quality hay that you can, and change it daily. Moldy hay is just as dangerous as moldy pellets. You should also stick with timothy hay, oat hay or meadow hay.

Alfalfa hay is found in pellets, so avoiding adding too much of this to your bunny’s cage. If they overeat alfalfa hay, they’ll suffer from excessive calcium intake. This can cause a litany of health problems.

If it’s the right kind, there is no such thing as too much hay for a rabbit. Your bunny will not gain weight, no matter how much of it they consume.

Rabbits also enjoy fresh fruit and veg, but it should not be fed to excess. Too many vegetables can upset a rabbit’s stomach.

You may also be surprised at which vegetables are suitable for rabbits. Carrots, for example, are full of sugar. This can lead to obesity in bunnies. Many forms of lettuce also contain a calcium-rich fluid called lactucarium. The best vegetables to offer your rabbit include:

When feeding a new vegetable to rabbits, start small. You’ll need to check that your bunny can eat the vegetable without a reaction.

Once you have settled upon suitable fresh vegetables, stick to appropriate portion sizes. Stick with the previously suggested tablespoon per 2 lbs. of weight. Less is more where fresh vegetables and rabbits are concerned.

Can Rabbits be Carnivorous?

As you may have noticed, all of a domestic rabbit’s favorite foods have something in common. They are vegetarian options. This is because pet rabbits are strict herbivores.

Domesticated rabbits are not capable of digesting meat. Rabbits need substantial amounts of fiber. They also need controlled levels of protein. Too much protein damages a rabbit’s kidneys.

Meat, as we know, is high in protein and offers virtually no fiber at all. Also, most meat sources are high in fat. Bunnies cannot process this. They’ll gain weight.

If a rabbit has a nibble of meat, they’ll generally be OK. They may not even swallow it. They’ll enjoy the gnawing required to work through the texture, but reject the taste.

A substantial amount of meat will cause severe problems for a bunny, though. Even if they’re also getting fiber from hay, any meat will sit heavy in a rabbit’s stomach. This will cause a digestive blockage, which can be life-threatening.

My Rabbits Begs for Meat from My Dinner Plate

Rabbits cannot always be trusted to know what is good for them. Despite being governed by survival instincts, bunnies make some very questionable decisions sometimes.

Your rabbit may well ask for meat, for example. This is not because they like the taste. They will never have experienced it before. They will be curious, though. Your dinner smells interesting, and they want to try some for themselves.

It can be hard to resist a begging bunny, but you must. If your rabbit develops a taste for meat, it can cause significant problems.

My Rabbit Ate Meat When I Wasn’t Watching

You’ll also have to oversee a free-roaming bunny. Rabbits are opportunistic eaters. Turn your back, and they may steal meat from the kitchen table.

If your rabbit does eat meat, watch them for a day or two. A small amount should be fine. They may have a mild stomachache, and possibly a runny stool. This will pass through. It’s sizeable quantities that cause issues.

If your rabbit shows any significant behavior changes two days after eating the meat, seek help. Otherwise, be more vigilant in the future. Bunnies can be mischievous, and develop bad habits.

Are There Carnivorous Rabbits in the Wild?

We have established that a domesticated rabbit cannot eat meat. How about in the wild, though? Animals that live untamed sometimes have to act outside the norm to stay alive.

This doesn’t apply to rabbits, but it does to specific breeds of hare. Rabbits and hares are different animals that belong to the same mammalian family. This means that they entirely separate species.

Snowshoe Hares are an example of a carnivorous lagomorph. They still eat plants if possible. As their name suggests though, Snowshoe Hares live in cold climates. If there is no greenery, they’ll eat animals to survive if necessary.

The journal Northwestern Naturalist discusses this. Snowshoe Hares have long been observed feeding on animal carcasses during the winter. These are typically the corpses of small animals, such as birds.

Snowshoe Hares not fussy, though. They’ll eat the body of a lynx, their primary predator, if they encounter one. If desperate enough, they’ll even eat a fellow hare.

It appears that this breed of hare has evolved to cope with eating meat. The protein provided keeps them alive during a harsh winter. They do not hunt active prey, though. Snowshoe Hares are strictly scavengers.

This is because their teeth are not strong enough to strip the meat from the bone. They leave this to other wild predators. A hare will then feast on any remains left behind.

Snowshoe Hares will eat one of their own if they’re driven to it. They won’t hunt and kill a fellow lagomorph, but food is food.

As a domesticated rabbit does not eat meat, they certainly won’t eat their own kind. Rabbits fight for territory and dominance, and that may involve biting. This isn’t a precursor to lunch, though. It’s just typical animal behavior.

The one exception to this rule is that some rabbits eat their young. There are several explanations for this.

Rabbits do sometimes eat their young. It’s rare, though. These animals are driven by survival instinct. They’re aware that there is safety in numbers, so they achieve little by eating their babies.

If your pet does eat her young, think carefully before attempting a second breeding. She will have done so for a reason. Learning why will prevent a repeat of the

Do Rabbits Eat Their Babies if You Touch Them?

This is a myth, and a harmful one at that. It has entered legend that, once human hands touch a baby rabbit, their mother rejects it. Some have extended the fallacy to include cannibalism. This is not true.

As discussed, some mothers do eat their young. This has nothing to do with them being touched, though. We have already explained the driving forces behind this behavior.

If you spot a baby bunny in the wild, you should avoid handling them. This is purely because they’ll be terrified, though. If you do pick them up, find their nest and return them. Their mother will return to feed her young later.

If you’re wondering why rabbits leave their babies alone, it’s to protect them. A rabbit knows that her own scent will be very strong. As a result, she leads potential predators away from her nest while foraging.

Yes, a bunny will know if human hands have touched her young, It doesn’t mean that she’ll eat them, though. 90% of the time, it will have no impact on how she reacts.

Herbivore and carnivore are rarely binary terms where wild animals are concerned. Having said that, it’s atypical for a rabbit’s diet to be anything but plant-based.

That isn’t just a personal preference. It’s essential for their survival. Rabbit bodies and digestive tracts need unlimited fiber, and small amounts of anything else. Any meat will upset this balance.

If your own bunny develops a taste for meat, get them out of the habit. They may enjoy it, but it will harm them. Rabbits eat a plant-based diet. Sometimes, it is that simple.

1 thought on “Do Rabbits Eat Meat (or Just Plants)?”