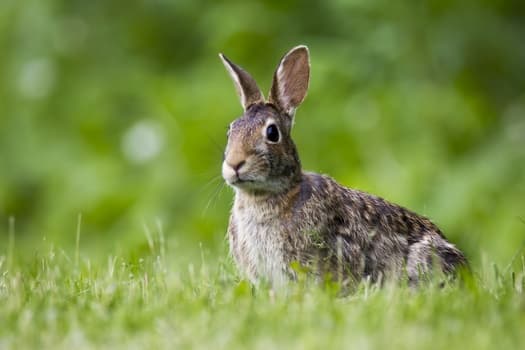 Rabbits can make a considerable amount of noise by stomping their feet. Thumping is most likely to occur when they’re communicating something that they consider urgent to you or other rabbits.

Wild rabbits commonly stomp their feet when they’re feeling afraid due to a nearby threat. Stomping warms underground rabbits that a predator is in the vicinity. This behavior remains instinctive in domesticated pets. Rabbits will also stomp for attention, or as an expression of anger and annoyance.

Your rabbit is trying to let you know something important to you. If you don’t take action, they’ll keep on thumping their feet until you do. This can cause stress or injury to your pet.

Why is My Rabbit Stomping His Feet?

Foot stomping is a crucial part of rabbit communication. While it may appear your pet is just being noisy, the behavior always has an explanation.

Rabbits are not verbal animals, so foot stamping is typically their noisiest cue. Vocalizations may occasionally accompany the behavior. This is likely if the rabbit is angry.

If your rabbit makes a habit of stamping their feet, learn why. There will be communicating with you. Ignoring the action can cause your bunny to distrust you, which will harm your bond.

My Rabbit Thumps for No Reason

Rabbits never stamp their foot for no reason. Whenever your rabbit stamps their foot, take the time to survey the landscape. Learn why they are reacting this way. Has something spooked them? Is another pet bothering them? Do they feel neglected, and want to show you something?

A rabbit thumping their foot should be taken seriously. Just like babies, rabbits cannot verbalize their wants or desires. Thumping is the first step to helping you work it out for them.

Do Rabbits Thump When They’re Afraid?

The most common explanation for rabbit stomping is alarm or fright. Your rabbit is trying to warn you that something is coming.

At first, this may seem like nothing to you. We have to remember, rabbits have much stronger senses of smell and hearing than humans. They may detect a predator in the distance that’s off our radar.

Rabbits will keep this behavior up until they feel the threat has passed. This could take some time, and they’ll grow increasingly distressed. Your rabbit is trying to give you a warning.

Soothe your rabbit as best you can. Offer delicate strokes, and reassure them by speaking in a calm tone. Train your pet to understand words like, “it’s OK.” If your rabbit finds comfort in handling, give them a cuddle.

Most of the time, it’s nothing for a human to worry about. Your rabbit may smell or hear a cat in the distance. Alternatively, they may have been startled by a loud noise. Car doors slamming, for example, can be deafening to a rabbit.

All the same, show your rabbit that you are taking their fears seriously. Acknowledge their thumping, and take action. If necessary, return them to their hutch. Most bunnies feel safer in their own home.

Don’t immediately scoop up a rabbit and lock them away after they stomp their foot, though. Calm them down first. If your rabbit is afraid, this terror will be magnified when alone in an outdoor hutch.

It’s equally important that your rabbit doesn’t feel they are being punished for stamping their foot. This sends a message that warning their family of danger is a bad thing.

Do Rabbits Stamp Their Feet to Frighten Off Predators?

If the rabbit thinks they have a chance to defend themselves, they may take it. While most bunnies instinctively flee danger, they’ll sometimes stand up for themselves.

By stamping their foot, the rabbit will be hoping to scare the predator away. It’s a warning sign that they have strong hind legs, and know how to use them.

A rabbit would rarely take this tact against a large animal, such as a fox. They may do it against a smaller predator. They’ll also stamp to warn off a fellow bunny if they don’t want to interact.

Is a Rabbit Stomping Their Feet Having a Tantrum?

If your rabbit is stomping in anger, the behavior will likely be accompanied by vocalizations. Snorts and grunts denote unhappiness. Rabbits are capable of hissing and snarling when agitated.

There are many reasons why a bunny may react this way. They’re territorial, so cleaning their cage will displease them. Your rabbit doesn’t see it as cleaning. They think you’re invading their domain.

Rabbits also dislike being stopped from indulging in an activity. Take chewing electrical cables as an example. Your rabbit will be grumpy if you pull them away from their snack. They don’t understand that you’re saving their life.

Even specific verbal cues can provoke this response. As Bunnyhugga explains, rabbits understand a number of words. Some of these may be pleasurable, and result in binkying. Others will result in indignation.

Take, “bedtime” as an example. If you’re ready to retire, you’ll likely want to lock your rabbit in their hutch. Your pet may not be prepared for this, and want to run free for longer. A foot-stomping tantrum to rival a toddler can follow.

You can’t cave in to this outburst. Calm your rabbit down before attempting handling, though. An angry bunny can bite surprisingly hard. You should make friends again before scooping your rabbit into your arms.

Do Rabbits Thump for Attention?

Attention is a common explanation for a rabbit stomping their foot. They realize that it makes a surprisingly loud noise. You won’t be able to help but look up.

There is a difference between looking for attention and misbehaving. Your rabbit may want to play with you. They may even want to show you a trick. Many house rabbits like attention.

If your rabbit is stomping, check your watch. Have you missed a mealtime? Are they due time out of their cage for exercise? Do they usually have a treat at this time? Rabbits have a reliable body clock. They know when their schedule is off.

Of course, your rabbit may be thumping because they feel neglected. Bunnies need near-constant stimulation. If you haven’t spent sufficient time with them, you’ll know about it.

If your rabbit wants attention, they’ll usually approach you directly. If nudges with their nose follow the thumping, they want your focus. It’s time for a treat, or to be petted and groomed.

Why Does My Rabbit Stomp Their Feet at Mealtimes?

Sometimes, rabbits stomp in sheer excitement. If they thump their foot and start to binky, they know that food is coming. Like most pets, dinnertime is the highlight of a rabbit’s day. This goes double if treats will also follow.

If you have multiple rabbits, observe whether it’s the dominant bunny that behaves this way. This thumping is the alpha rabbit warning the other bunnies to wait their turn. They will get to investigate the food first.

If it’s a more submissive rabbit that thumps, they are likely announcing that food is incoming. Other bunnies will often drop everything and wait expectantly at the sound of the stomp.

Why Do Rabbits Thump in Their Hutch?

If your rabbit only seems to stomp in their hutch, they’re asking for their freedom. Rabbits are energetic when they wake up from a long, refreshing sleep. They long to stretch their legs and get some exercise.

Some rabbits escalate from stomping to kicking their hutch. They’re unlikely to damage the shelter in doing so. They could hurt themselves, though. At best, they’re at risk of splinters. At worst, their foot could become trapped in wire.

It’s best not to delay when your rabbit starts thumping in their hutch. Let them out, and set up their playpen or run. The longer the bunny thumps, the more frustrated they’ll grow.

Don’t worry about caving to your pet’s demands. They consider themselves your boss anyway. There is no real harm in letting your bunny call the shots. Leaving them to grow stressed, though, is detrimental to their health.

Of course, the rabbit may also be frightened. If they are in their hutch, they may feel vulnerable to predators and thump. This behavior is more common at night.

My Rabbit is Stomping at Night

The most likely explanation for a rabbit thumping their feet at night is fear. They are afraid of what invisible threats may be lurking in the darkness.

If your rabbit lives outdoors, they will smell and hear nocturnal predators. This can understandably make them skittish. They’ll thump because they’re afraid. Show compassion and understanding in this situation.

It’s also possible that your rabbit is just bored. Bunnies are not nocturnal, but they’re active later into the night than humans. If your pet lacks stimulation in their hutch, they’ll thump for attention. They may even kick their hutch.

Ensure that your bunny has plenty of physical exercise during their waking hours. This will tire them out by nightfall. The hutch should also be filled with toys to amuse a rabbit when they’re alone.

If the rabbit continues stomping and kicking, consider adding a second bunny to the hutch. Rabbits are social, and grow frustrated and lonely when they spend too much time alone. Just ensure the two animals bond before they share a home.

Two rabbits still need entertaining, though. If they combine their efforts, they may kick open the door to their hutch. Domesticated rabbits that escape from a backyard do not last long in the wild.

Do Rabbits Thump When in Pain?

Pain is not the first thing that we associate with foot stomping in rabbits. It is a possible explanation, though. It becomes more likely if the bunny stomps constantly and continually.

It’s not the pain that is sparking this reaction, but the stress that discomfort causes. If the rabbit is in constant discomfort, they’ll become upset and frustrated. They won’t understand why their body is betraying them.

If your rabbit will not stop thumping, and you’ve ruled out all other explanations, seek help. You’ll have to explain that you’re sure your pet is unwell, though. You’ll also need a rabbit-savvy vet. The House Rabbit Society lists these by state.

Many vets are unfamiliar with rabbit health. This could lead to them dismissing your concerns. After all, stomping is just something that rabbits do. Bunnies hide illness as long as they can, so you’ll need somebody that can move quickly.

Rabbits stomp their feet for a variety of reasons, but there always is a reason. Learning what triggers the behavior is an integral part of keeping rabbits as pets.

The happier your bunny is, the less likely they are to stamp their feet. If they feel safe and secure, and receive sufficient attention, they’ll not need to thump.

If your bunny does start stomping, react quickly. Rabbits will stomp until they feel they’ve made their point. Their legs are strong, but they’re not invulnerable. Your pet could hurt themselves in their attempt at gaining your attention.