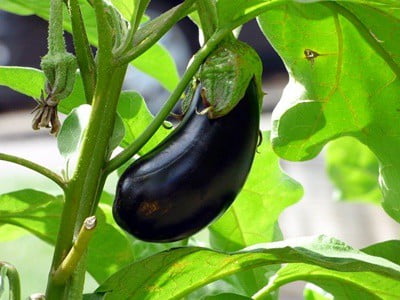 Rabbits love eating leafy green vegetables, such as eggplant (aubergine). However, rabbits can also become bored with eating the same foods every day. Owners may wonder if they can start to branch out their rabbit’s diet out. There are some vegetables that are definitely better for your rabbit than others. There are even veggies that are toxic if consumed by rabbits.

Eggplant is safe for rabbits to eat in moderation. Eggplants (aubergines) are good sources of fiber, vitamins, and minerals. They are also part of a plant family (nightshade) known for containing trace amounts of toxic compounds. The eggplant’s leaves and tops are especially poisonous and should not be given to a rabbit to eat. However, rabbits can eat very small portions of eggplant.

You can feed your rabbit slivers of raw eggplant, but not dried or cooked eggplant. Drying out these vegetables or cooking them in any way can diminish their nutritional value drastically. Additionally, giving rabbits that have diabetes mellitus, obesity, hyperglycemia, and other adverse cardiovascular conditions benefited from eating pelletized eggplant.

Are Eggplants Healthy for Rabbits?

All eggplant varieties, no matter the shape or size, tend to have around the same nutritional value.

The following nutritional values are based on a 100-gram sample of popular edible vegetables in the nightshade family Solanaceae and have been recorded by the USDA (United States Department of Agriculture).

Eggplants are good sources of dietary fiber as well as essential vitamins and minerals. Rabbits cannot make their own vitamins, which makes a vitamin-rich diet all the more important for their health. Various minerals, such as potassium and manganese, are also used to aid crucial bodily functions such as healthy muscle growth and bone development.

In comparison to the sun-dried tomato, though, the eggplant might not seem like it is all that nutritious. However, while sun-dried tomatoes have the highest amount of dietary fiber, they are also high in carbohydrates, protein, fat, and sugar. All these nutrients can make a rabbit very sick if eaten in huge quantities.

It is best to not give your rabbit too much, if any, dried fruits and vegetables. According to Colorado State University, some crucial vitamins, minerals, and all water content are lost in the drying process while retaining the same amount of fat and calories. Rabbits need all those nutrients to thrive, so giving them foods without it is essentially their equivalent of junk food.

The eggplant, also known as the aubergine or brinjal in other parts of the world, is a notable member of the nightshade family Solanaceae.

This family contains a plethora of plant species, most of which are poisonous if consumed. Toxic plants are something all rabbit owners need to steer clear of, but there are a few perfectly edible ones.

The scientific classification of the eggplant is Solanum melongena, pertaining to the Solanum genus of nightshades. Other members of this genus that you may be familiar with include potatoes and several varieties of tomatoes. There are several different varieties of eggplants, the most notable of which include:

Can I Feed Eggplant To an Adult Rabbit?

Feeding adult rabbits eggplant is fine, but only in very tiny amounts around 2 times a week at most. Eggplants and the other members of the Solanaceae family contain a toxic glycoalkaloid known as solanine.

Glycoalkaloids are organic, bitter-tasting compounds found within the Solanum genus. Some are considered to be extremely toxic, and solanine is the most notable poison of them all.

According to the Food and Agriculture Organization of the United Nations, plants of the nightshade family develop solanine to deter insects, herbivores like rabbits, and other creatures from eating them.

In this way, it is a sort of natural pesticide. There are higher concentrations of this poisonous substance in the green sections or eyes of potatoes, though other parts like the leaves, flesh, and stem can also contain trace amounts of this glycoalkaloid.

Diarrhea, can be especially harmful to rabbits. Rabbits cannot vomit, so if they ingest something toxic, they will not be able to expel it without letting it fully digest and permeate throughout their bodies. This in turn may lead to diarrhea.

Diarrhea in rabbits is dangerous. Not only is it a sign that your rabbit has developed a serious digestive problem, but left untreated, it can even be fatal. You should always take care to feed only very small portions of eggplant to your rabbit at a time to prevent this from happening.

Younger rabbits digestive systems are more delicate than adult rabbits, so you need to be careful about the foods you feed them. It may be best to wait until your rabbit grows a little older before letting it eat any eggplant.

However, eggplants can also provide a young rabbit with essential nutrients that aid healthy growth. Feeding it very small portions of eggplant might prove beneficial. The Journal of Nutrition states that rabbits’ daily diets should consist of at least 0.6 percent potassium to ensure maximum growth.

It also states that rabbits should have around 0.3 milligrams of manganese daily to maintain normal, healthy bone growth. 100 grams of eggplants offer just under that amount, so you should be safe there.

Additionally, rabbits should have around 39 micrograms of vitamin B-6 daily. Without it, your rabbit runs the risk of a lowered growth rate and even death. Much of this vitamin is obtained from their food and then distributed again in the rabbit’s cecotropes.

Rabbits deposit both solid pellets and much softer feces called cecotropes. They are produced within the rabbit’s digestive tract to help it absorb essential nutrients.

How To Get Rabbits to Eat Eggplants

Whether a rabbit can handle eggplant in its diet depends on several factors, including its own personal preference of foods, its current digestive health, and on how you introduce this vegetable into your rabbit’s diet.

Rabbits can be somewhat picky, so you may have to go by trial-and-error for some time before you figure out which ones they do like. It is also not a good idea to feed a rabbit eggplant if you know it has digestive issues.

It is best to introduce any new foods into your rabbit’s diet slowly. Since eggplants should only be given as a rare treat, this should not be much of a problem. You should watch how your rabbit reacts to eating this new food. Even if it does not show any visible disgust, that does not mean they necessarily take to eggplant well.

You will know if your rabbit’s digestive system does not digest eggplant well if you notice it is leaving soft feces lying around. Rabbits will eat their cecotropes, so if you see any lying around, this could be a sign of a digestive problem. It is also possible that your rabbit is suffering from diarrhea, which can be a fatal condition if left untreated.

Though rabbits do enjoy having leafy greens in their diets, you should never give your rabbit eggplant leaves or the tops of eggplants. These parts are extremely toxic, even more so than the actual flesh of the vegetable itself. This is because they contain high levels of solanine.

Your rabbit may not react to the minuscule amounts found within the flesh of the eggplant, but this does not mean they can eat more of this vegetable. Ingesting large amounts of solanine can lead to solanine poisoning.

Cooking eggplant can reduce or otherwise dissolve the amount of nutrients found within raw eggplant that would benefit a rabbit’s health. Even boiling or steaming this vegetable plain can have this effect.

Additionally, you should not give your rabbit any eggplant you have prepared for your own dinner. On its own, eggplant is quite bitter, thus requiring oils, spices, and herbs to make it much more palatable for human consumption. Eggplants absorb fats and flavors when cooked, which may be great for humans, but dangerous for rabbits.

Rabbits cannot have a lot of fats, or they run the risk of developing obesity and heart disease later in life. They also do not do well with many spices and copious amounts of herbs.

How Much Eggplant Can Rabbits Eat?

Only give rabbits a small sliver of eggplant as a treat. Rabbits’ digestive systems are far more delicate than humans, and they may not take to this vegetable all that well.

However, Integrative Obesity and Diabetes state that rabbits who suffer from diabetes mellitus, obesity, hyperglycemia, decreased liver function, and dyslipidemia (or elevated amount of fats in the bloodstream) showed significant improvement after consuming eggplants.

Eggplants’ leaves, flesh, and extracts have long been used for medicinal purposes, and are known to contain antidiabetic, anti-inflammatory, and antioxidant properties.

They also possess key bioflavonoids (anti-inflammatory compounds) and vitamins like vitamin A, B, C, and E to name a few. Despite these benefits, the solanine content (however low it may be) in eggplants might be worrisome to rabbit owners. Overall, a diet consisting of between 10 to 20 percent Solanum melongena fruits:

Elevated liver enzymes such as AST, ALT, and ALP are all typically signs of internal injury or rise in harmful bodily chemicals, so the significant reduction of these enzymes will help restore your rabbit’s liver to a healthier state.

Because rabbits do not fare well with consuming high-fat diets, it is essential for an owner to reduce their rabbit’s fat intake as much as they can. Eating eggplants naturally lower high levels of cholesterol and triglyceride in the tested rabbits’ bloodstream. Such benefits belie that eggplants may indeed play a role in improving your rabbit’s health.

Keep in mind that these studies are based on obese rabbits with preexisting health conditions, and may not apply to rabbits that are a healthy weight or below. If your rabbit is obese or pushing towards it, you should not feed it large amounts of raw eggplant in the hopes that they will lose weight.

Note that researchers let their eggplant samples dry before grounding them up into a powder that they made edible pellets out of. They did not give the rabbits they studied fresh eggplant slices at all during the study.

Additionally, they were not yet able to isolate exactly which compound in the rabbits’ feed was responsible for such benefits. It is possible that there was a component of the drying and/or pelletized process that led to these health benefits, or that it only pertains to powdered, pelleted eggplant.