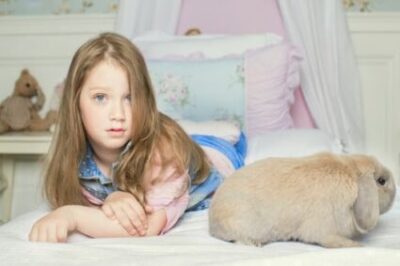 Your pet rabbit has started experiencing ‘cold-like’ symptoms. It has a runny nose and eyes (nasal and ocular discharge) and is sneezing constantly. However, your rabbit hasn’t caught your cold because human colds aren’t contagious to rabbits. So, why is your rabbit sneezing all the time?

If your rabbit is producing a clear discharge, it has an upper respiratory infection called snuffles. This can be diagnosed via a ‘culture and sensitivity test’, which involves sending some of the nasal discharge to a lab for testing. Once the bacterial species is identified, the condition can be treated with antibiotics. If your rabbit dry sneezes, it has an allergy, overgrown teeth, or irritation of the nose. This irritant will need to be removed or corrected.

Why Do Rabbits Sneeze?

To summarize, a rabbit sneezing fit has these medical explanations:

Sometimes, rabbits release a clear, white discharge (mucus) when they sneeze. This will be due to a respiratory infection. The most common explanation is snuffles, named after the noise the rabbit makes. Common symptoms of snuffles in rabbits include:

A healthy adult rabbit may recover from snuffles on its own, but medical help should still be sought. However, vulnerable rabbits will always need immediate assistance from a vet.

According to the College of Veterinary Medicine & Biomedical Sciences (CVM) at Texas A&M, stress is the most common reason for snuffles and other respiratory illnesses. Ensure that your rabbit has a reliable daily routine and ensure that it gets regular exercise. Keep your rabbit’s hutch sanitary and well-ventilated so that it feels contented and relaxed.

Snuffles is highly contagious. So, even a happy and contented rabbit can be struck down by this condition if it comes into contact with the bacteria through physical contact. Quarantine a sick rabbit until it recovers.

Is Snuffles Dangerous for Rabbits?

Very young or old rabbits, and those with other health problems, are most at risk of harm. They are most likely to develop more severe conditions, such as pneumonia, so prompt and continued treatment is essential.

If you have a healthy adult rabbit, the prognosis for snuffles is really good. If it stays warm and well-hydrated, and treatment is provided in the form of antibiotics, the condition will gradually go away.

How to Treat Snuffles in Rabbits

Following lab testing, a vet will prescribe antibiotics. The treatment should be continued for several days after the visible symptoms (raspy breathing, runny nose, and streaming eyes) have diminished.

Rabbits with stress-free lives that are kept in a clean hutch are the least likely to develop this condition.

Is Rabbit Snuffles Contagious to Humans?

Snuffles is not contagious to humans in the way you might think. If you handle a rabbit with snuffles, you will not come down with a cold. Despite this, Pasteurella is a zoonotic form of bacteria. The skin would need to be broken through a scratch or bite.

While this is rare, a rabbit with snuffles may be temperamental. When handling a poorly rabbit, gloves and long sleeves are recommended.

Exposure to the Pasteurella bacteria will lead to pain and swelling around the wound site. It can also cause respiratory infections if left untreated, and has even been linked to meningitis. If bitten by a rabbit with snuffles, wash the wound immediately with antibacterial soap.

Rabbit Sneezing with No Discharge

If your rabbit sneezes without discharge, it’s less concerning. However, your rabbit will find this sneezing annoying. If ignored for too long, the cause of the sneezing may worsen. You must identify what’s wrong.

What Causes an Allergic Reaction in Rabbits?

Dry sneezing is a common symptom of an allergy. An allergy will lead to a sneezing fit, and then your rabbit will continue as usual. You need to identify what is causing the allergic reaction and remove the trigger.

There is no limit to what a rabbit could be allergic to. Dietary reactions are common, as are reactions to plastic food and water bowls. Many rabbits also react adversely to dusty hay.

Consider which new types of food have been added to your rabbit’s diet. Remove them one at a time and see how your rabbit responds.

Rabbits can also be sensitive to their environment. If your rabbit only sneezes when handled, it may have a sensitivity to your perfume or cologne, or even the fabric of your clothing.

Be aware that some rabbits suffer allergies to grass and pollen. If your rabbit exercises outdoors, this may be the explanation.

If your rabbit only endures dry sneezes, it’s irritating but not dangerous. Remove the allergen and it will stop sneezing.

What Can Irritate a Rabbit’s Nose?

A number of foreign objects can tickle a rabbit’s nose and lead to sneezing. That’s one of the reasons why rabbits wiggle their noses.

If your feed your rabbit pellets, check the contents of the bag. Are you close to the bottom? If so, you are likely flooding its food bowl with dust.

This dust is not harmful or toxic, but it will make a rabbit sneeze if inhaled. Sieve out any dust before serving dinner. Alternatively, switch to a newer bag of pellets or dust and mold-free hay. Mold can make rabbits ill.

Check that your rabbit does not have anything trapped in its nose. rabbits are surrounded by hay, which can tickle their nostrils. They may even inhale a small piece of litter from their tray.

If you suspect that something is trapped in the nose, use a small torch to check. If you see a foreign object, remove it with tweezers.

Check your rabbit’s teeth. A rabbit’s teeth never stop growing, and need to be filed down through constant gnawing. Failure to do so will mean that the teeth will become overgrown, potentially irritating the nose.

How Do I Know if My Rabbit’s Teeth are Too Long?

You should monitor your rabbit’s appetite. If your rabbit seems disinterested in eating, it’s often due to dental pain.

Run your finger over your rabbit’s gums. If they feel bumpy, it suggests that the teeth are becoming overgrown. Also, keep an eye out for runny eyes alongside the sneezing as overgrown tooth roots can block the tear ducts.

Only an x-ray can confirm if your rabbit is experiencing issues with its teeth. If this is the case, it’ll need treatment. This involves placing your rabbit under anesthetic and trimming the teeth with an electric burr tool.

How Can I Stop My Rabbit from Dry Sneezing?

If your rabbit is continuously dry sneezing, you’ll need to undergo a gradual process of elimination. It’s allergic to something, even if it’s not obvious.

Consider the location of your rabbit’s hutch. Ensure that your rabbit has sufficient ventilation. Without adequate airflow, your rabbit will breathe in dust, smoke, mold, dander, and other environmental irritants.

If this still doesn’t help, look more closely at your rabbit’s diet. It’s time to ditch those dusty pellets (or switch to a better brand). High-quality hay is more than enough to keep an adult rabbit nourished and healthy.

3 thoughts on “Is It Normal for Rabbits to Sneeze a Lot?”