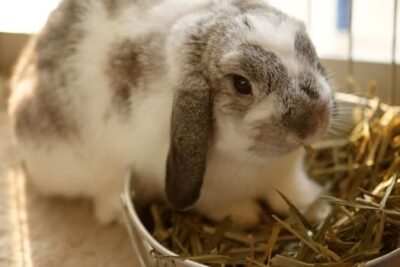 Rabbits are known for having long ears, fluffy tails, and twitchy noses. All rabbits wiggle their noses, regardless of breed. A rabbit’s nose will wiggle when eating, playing, investigating, and even relaxing.

Twitching their noses helps rabbits to smell better. By wiggling their noses, more scent receptors make contact with the air. This helps them to detect and identify scents in their environment. A rabbit’s nose will twitch faster when it is attentive and interested in what is going on.

We’ll look at how nose-twitching helps rabbits smell better, and how important their sense of smell is. We’ll then discuss what it means when rabbits twitch their noses slowly, quickly, and not at all. This is a lesson in rabbit body language for new and experienced owners.

Why Do Rabbits Twitch Their Noses?

All breeds and species of rabbits twitch their noses, both domestic and wild. Rabbits wiggle their noses nearly constantly while they’re awake, in response to almost any stimulus.

If you watch two rabbits together, you’ll notice their noses twitching almost in the same rhythm. It almost looks like a form of communication.

Rabbit nose wiggling is a survival technique. It helps them to avoid danger and familiarize themselves with their environment. It does this by enhancing their sense of smell.

The inside of a rabbit’s nose is coated in cells called olfactory receptors. These cells detect scent particles in the air and send signals to the brain in response. Rabbits have 100 million olfactory receptors – over 16 times as many as humans.

When a rabbit is twitching its nose, it’s opening its nasal passages wider. As a result, a larger amount of air comes into contact with the olfactory receptors. This enables rabbits to detect even the faintest smells that have been diffused over a wide space.

Rabbit nose twitching also stimulates the mucous membranes that line the nose, creating more moisture. Scents get stronger when they are suspended in moist air compared to dry air.

Try bringing something smelly into the bathroom when the shower is running and see how much stronger it smells.

Why Do Rabbits Have a Good Sense of Smell?

A rabbit’s sense of smell is their most crucial sense. It has many important purposes. Wild rabbits, in particular, depend heavily upon it to live.

Rabbits are born deaf and blind, but they can smell straight away. Rabbits first use their nose to locate their mother’s teat. According to Berlin and Munich Veterinary Weekly, newborn rabbits that can’t smell struggle to find the teat or suckle. When they grow up, their sense of smell remains crucial for their survival. It allows them to:

You might notice your rabbit twitching its nose particularly fast when you come into the room. It’s detecting who you are and whether you’re friendly. If a rabbit couldn’t wiggle its nose, it could still smell – just not nearly as well. This may be the difference between life and death for a wild rabbit.

So, we know that rabbit nose twitching is a way of enhancing their sense of smell. But what does it mean in terms of rabbit body language?

If you’ve been around a rabbit for a long time, you’ll know that its nose-twitching pattern is not always the same. It changes almost constantly. Rabbits sometimes seem to twitch their noses very fast – over 120 times per minute. At other times, it can slow down to 20 times per minute, or stop.

In rabbit body language, nose twitching is a sign of curiosity. By opening their nasal passages wider, they’re able to smell their surroundings better. If they’re curious about what’s going on, their first instinct is to try to pick up a scent.

This is because rabbits are prey animals. In the wild, if there were a sudden noise or movement that caught their interest, they’d sniff around. Smelling the air helps them to detect whether there’s another animal nearby.

When a rabbit is at rest, and nothing interesting is happening, its nose twitching slows down. It’s a sign that it feels calm and safe. So, in this way, the speed at which a rabbit’s nose twitches is a bit like a speedometer. Except instead of measuring speed, it measures how alert and interested the rabbit is in its surroundings.

If your rabbit’s nose has stopped twitching, you may wonder what’s going on. If it uses it to help them smell, shouldn’t it be twitching all the time? When a rabbit’s nose stops twitching, is it a sign of illness, or that there’s something wrong? Rabbits don’t always feel the need to wiggle their noses. There are 4 scenarios during which a rabbit’s nose will stop twitching:

There’s probably no reason to worry if your rabbit’s nose has stopped twitching. However, if your rabbit is sneezing or has a runny nose, it could be a sign of snuffles (a respiratory tract infection).

It could be that your rabbit is overstimulated or stressed. A rabbit’s nose twitching fast is a sign that it’s on high alert. It means that it’s interested in whatever is going on. It’ll probably be paying close attention to something, whether it’s you, another animal, a noise, or a food.

You’ll notice your rabbit’s nose twitching fast when you offer it a new food type. They’re analyzing it in order to decide whether it’s safe to eat. If you introduce your rabbit to another rabbit, it’s nose will also twitch very fast as they gradually get to know them.

Your rabbit’s nose will also twitch rapidly if it’s startled by something. Its ears will point forward toward the interesting thing. It’ll sit up, putting its weight on the back half of its body. The rabbit’s eyes will be wide and alert.

As well as attentiveness, a fast-twitching rabbit nose can indicate agitation. If your rabbit is scared, anxious, or stressed its first instinct is to run. You may notice that after your rabbit’s nose has been twitching rapidly that it will dart away from whatever’s alarming them.

Rabbits are extremely sensitive to noise and movement. Any new experience could be a potential predator approaching. Domestic rabbits haven’t lost this basic survival instinct.

Why Is My Rabbit Feeling Stressed?

A rapidly-twitching nose does not always mean that your rabbit is anxious. However, if something is stressing your rabbit out, you should check what it is. Prolonged stress can lead to health issues such as heart problems. If your rabbit is stressed, you’ll notice the following signs, as well as the fast rabbit nose twitching.

There are various causes of stress in rabbits. It’s usually triggered by over-stimulation. Rabbits don’t like loud noises, strangers, or being near predatory animals, such as cats and dogs. They can also become stressed if there’s not enough space, or nowhere for them to hide. Hot temperatures, illness, and loneliness can also cause stress. The only way to calm your rabbit down is to remove whatever is causing the stress.