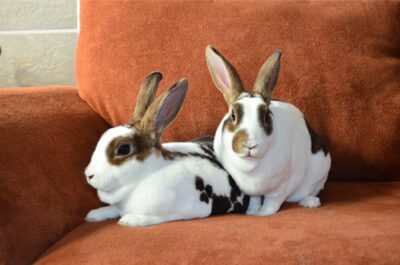 Rex rabbits make good pets. They are intelligent, social, playful, and affectionate. Rex rabbits are easy to take care of once you understand their health, nutritional, exercise, and housing needs.

The Rex rabbit is a docile breed that is best housed indoors in a hutch with plenty of room. It doesn’t have traditional grooming requirements and can be cleaned occasionally with a damp cloth. A Rex rabbit’s diet should consist of hay, leafy vegetables, and some fruit.

As a breed, Rex rabbits are well-mannered and calm. They aren’t suitable for young children as they don’t tolerate being picked up and have fragile backs. Rex rabbits are highly social animals and are best housed in pairs (e.g. neutered male with a spayed female).

Taking Care of a Rex Rabbit

The Rex rabbit has an average weight of around 7 to 10.5 lb. at adulthood. The ideal weight for an adult rabbit doe is 9 pounds and 8 pounds for bucks. Ensure that your rabbit exercises regularly and eats the right food to keep it at an optimal weight.

As a breed, Rex rabbits are calm, affectionate and maternal, often mothering other rabbits. They’re highly intelligent and really enjoy human company. Rex rabbits can also be playful and boisterous, and are usually good with other household pets.

Although Rex rabbits were ‘considered’ to be child-friendly, these rabbits are not suitable for small children. They do not enjoy excess handling and do not tolerate being picked up incorrectly. They have frail backs that can easily be damaged if the rabbit is dropped.

In the wild, rabbits live in large groups with ample living space. It is highly recommended that Rex rabbits are paired with a suitable companion, preferably of the opposite sex. Make sure both rabbits are spayed and neutered to prevent breeding.

If you do not intend on breeding your Rex rabbit, get it spayed or neutered as soon as it reaches sexual maturity (around 3.5 months for males and 4-6 months for females).

Spaying or neutering your rabbit will not only prevent any unwanted litters, but it will also protect your pet’s health in many ways.

Not spaying or neutering a rabbit predisposes it to hormonal behaviors, such as fighting, aggression, urine spraying, and food guarding. Although Rex rabbits are known to be less hostile, fixing them will only make them calmer.

Female rabbits that haven’t been spayed have a higher risk of uterine cancer.

Male rabbits that haven’t been neutered may fight each other to the death due to their raging hormones. According to Applied Animal Behavior Science, unspayed female rabbits are less likely to fight when housed together, but they should still be fixed for the above reasons.

Rabbit teeth never stop growing. The growth of their teeth is controlled by the wear that takes place during chewing (especially when chewing hay).

If your rabbit’s teeth are not wearing down, the teeth may grow into the face and jaws, causing serious pain. Always check for signs of overgrown teeth or an infection caused by the teeth growing into the jaw, such as loss of appetite, drooling (wet chin), and sluggish activity.

It’s best to house Rex rabbits indoors as it reduces their risk of hypothermia, overheating (heat stroke), being attacked by predators and loneliness. Furthermore, Rex rabbits are at a much higher risk of dying early if they are kept outdoors, instead of being housed indoors.

Even if your Rex rabbit is housed inside a safe hutch outside of your home, remember that rabbits get scared easily. Rabbits can die of fright from just seeing a predator or hearing a loud noise.

Keeping your Rex rabbit outside can make it more antisocial. For example, your pet may start showing signs of aggression or being afraid of people.

If you’re keeping your rabbit indoors, be sure to confine it to a rabbit-proofed room of your home. You can house your rabbit in a standard cage, a rabbit condo or a puppy playpen. While choosing an enclosure for your Rex rabbit, consider the following:

Look for cages that are large enough for your rabbit to comfortably stretch out in and play. This should be coupled with at least 32 square feet of safe playing space for your rabbit. Make sure this space is properly fenced by a playpen gate or a pen to prevent accidents.

Hiding spots are crucial for a rabbit’s wellbeing. All rabbits, including Rex rabbits, use hiding places to seek comfort when they’re feeling scared or stressed. You can make a hiding place for your rabbit by cutting out an opening out of a small cardboard box and placing it in your rabbit’s hutch.

Each rabbit should have its own hiding spot to prevent competition and fighting. Place your rabbit’s favorite toys and some hay for it to nibble on, which will be useful when it is feeling stressed.

If your rabbit isn’t using a litter box yet, paying attention to where it usually likes to go can help. Place the litter box in the corner your rabbit prefers to poop in.

Make sure there are 1-2 litter boxes inside your home as well so that your rabbit can go to the bathroom when it is playing outside its cage.

A Rex rabbit’s diet should be 70% high-quality hay (such as orchard hay) and the remaining should be a healthy mix of leafy greens, vegetables, fruits, and pellets. Hay, such as alfalfa, is best given in moderation and fruits and veggies containing high sugar levels should only be given as treats.

Make it a habit to do some research before offering your Rex rabbit with any kind of food. There are some foods that are safe and some foods that can make your rabbit sick. It is also critical that your rabbit has access to fresh, clean water at all times, especially during warmer days.

Rex rabbits should be fed lots of hay. Hay isn’t only nutritious for rabbits, it also helps wear down their teeth. Always ensure that your Rex rabbit has access to plenty of hay at all times.

Include some fruits and veggies to your rabbit’s diet as well. Rex rabbits are fond of carrots, dark leafy greens, and some fruits. Be sure to offer your Rex rabbit a few dark leafy greens every day, along with something crunchy such as apple slices or carrot slices. Healthy treats include:

Although certain fruits and veggies may sound healthy, they should only be fed sparingly. Some produce items can cause bloating, gas and diarrhea in rabbits, which can lead to severe discomfort and behavioral changes. Therefore, the following foods should only be offered in moderation:

Rabbit kibble is a good nutritional supplement for a Rex rabbit. Offer no more than ¼ cup of rabbit kibble to your Rex rabbit every day, unless your vet advises otherwise.

Choose plain kibble instead of going for mixed rabbit kibble and your rabbit may pick out the tastiest bits and leave the more nutritious pieces behind.

Keeping Rex rabbits hydrated is critical for their health. Always make sure your rabbit has access to fresh, clean water.

Rex rabbits enjoy drinking out of a ceramic dish, but these can tip over, make a mess and reduce your rabbit’s water supply. If you end up going for a dish, make sure it is heavy so that it cannot be tipped over. Dishes must also be checked often to make sure they’re full and clean at all times.

Sipper bottles are a better option for your rabbit’s water supply. Sipper bottles do not tip over and the water inside them cannot be soiled with feces and hay.

Watch out for signs that your rabbit is drinking too much water.

Roughage (hay) helps to wear down your rabbit’s teeth and promotes better digestion.

Rabbits are keen groomers and ingest a lot of their fur during self-cleaning. Unlike cats, rabbits cannot throw up hairballs. Instead, clumps of fur get stuck in their intestines (GI stasis.)

GI stasis affects all rabbits, but you can prevent it by feeding your Rex rabbit high-quality hay. Although Rex rabbits don’t need much grooming, it is important to wipe them down during heavy shedding seasons.

Always keep an eye out for any abnormalities in your rabbit’s feces. Normal rabbit poop is often round, relatively dry and primarily composed of undigested fiber. If your rabbit’s feces resemble a string of pearls, chances are it is swallowing too much of its hair.

Your pet may need a quick brushing about once a week to prevent it from shedding too much. Brushing helps maintain the soft, plush appearance of Rex rabbit fur.

Owners should limit grooming only when it is needed as overgrooming can damage the rabbit’s coat. According to the Journal of Animal Physiology and Animal Nutrition, your Rex rabbit’s fur will be denser during the colder months compared to the summer months.

Do not let your Rex rabbit get wet and never bathe it. Rabbits are not only fond of water, but they may also develop hypothermia if they get too wet. Furthermore, the stress associated with bathing may lead to cardiac problems and even death.

During playtime, make sure your Rex rabbit does not chew on off-limit items. Rabbits enjoy gnawing at everything, including loose wallpaper, carpeting, area rugs, chairs, tables, wall trims, and door edges. To prevent any damage to your home and furniture, it is important to monitor your rabbit closely during its playtime.

If you notice your rabbit chewing on a dangerous item, stop your Rex rabbit by gently picking it up and placing it somewhere else. Offer your rabbit something else to chew on, such as cotton cloth, a cardboard box or an apple slice.

Since rabbits are likely to chew on anything, you must cover up all electric cords. Chewing on electric cords will not only damage your electronics but can seriously harm your pet as well.

Cover up all electric cords with a spiral wrap or hard plastic tubing. If you cannot cover up all your electric cords, lift them off the floor and place them high up so that your rabbit cannot reach them.

Rex rabbits are a calmer breed of rabbits that often tolerate being petted and picked up, especially if you allow them to play outside their cage and explore their surroundings.

Like all other domesticated animals, a Rex rabbit will become attached to the family member who feeds them and spends the most time with them. However, Rex rabbits are not afraid of anyone who picks them up gently and pets them.

In order for Rex rabbits to become more socialized, they need to be taken out of their enclosures. Allow your rabbit to roam free in a rabbit-proofed room for at least 2 hours a day. The longer they interact with other human companions, the more docile, interactive and playful they become.

Because Rex rabbits are relatively low-maintenance pets, they make good pets for first-time owners, seniors, singles, and couples who would enjoy rabbit ownership.

Rex rabbits are not suitable for small children, but older children who understand how to pick them up tend to do well with this breed. Rex rabbits are very fragile.

When it comes to toys, understand that each Rex rabbit has its own personality. A toy that is well-enjoyed by one rabbit may not be another one’s favorite. Rabbits prefer toys that they can chew on and entertain themselves with. Although Rex rabbits enjoy toys from pet stores, they’re also likely to enjoy simple toys, such as toilet paper rolls.

2 thoughts on “How To Care for a Rex Rabbit (Food, Housing, Entertainment + Health)”