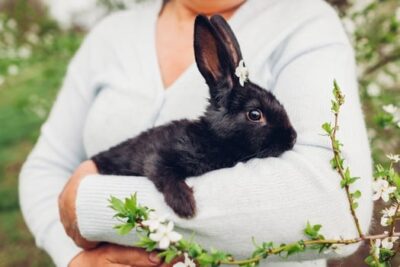 Baby rabbits start out life as tiny, fluffy animals. However, in the first year, rabbits grow quickly. The age at which rabbits stop growing depends on a variety of different factors.

We’ll look at the most popular rabbit breeds. We’ll discuss what age each breed reaches adulthood, and how big they’re likely to grow. We’ll then explore the different factors that can affect how large a rabbit becomes.

When Do Rabbits Stop Growing?

Kits are separated from their mothers at around 8 weeks old before being sold on by breeders and pet shops. At this stage, they’re still physically immature and aren’t close to reaching their full size.

At 8 weeks, rabbits still require extra protein and fat in their diet to enable them to grow and thrive. If you provide your baby rabbit with a plentiful supply of alfalfa hay, you’ll notice that they grow faster.

Rabbits may increase in size after they become sexually mature. Domestic rabbits aren’t considered adults until they are 1 year old. At this stage, most rabbits have stopped gaining weight. However, some breeds of rabbits reach their full size much earlier while others may continue to grow.

How Big Do Rabbits Grow?

A rabbit’s size at adulthood varies based on the following factors:

Your rabbit may not reach the average size for its breed, or it may exceed it slightly. Some rabbits stop growing earlier or later than others of the same breed, depending on their genetics, diet, and living environment.

When Do Rex Rabbits Stop Growing?

Rex rabbits are a popular breed, known for their dense and velvety fur. They have long upright ears and are available in at least 30 coat colors.

There are two varieties: the standard Rex and mini Rex. Both breeds look similar and have similar temperaments. The only difference between the two breeds is their size. As their name suggests, the mini rex is much smaller than the standard rex.

Standard Rexes are considered medium-sized rabbits. They usually weigh between 7.5 and 10.5 lbs as adults. They usually reach their full body size between 8 and 9 months of age.

Mini Rex rabbits weigh between 3 lbs and 4.5 lbs as adults. They achieve this weight at 6-7 months of age.

When Do Dutch Rabbits Stop Growing?

Dutch rabbits are recognizable due to their distinctive coat pattern. The front half of their body is white while their back end is dark.

Their ears and eye areas are also dark with a blaze of white going down the middle of their face. Their dark markings can be various colors such as chocolate, black, or grey.

Dutch rabbits are a small-to-medium-sized breed. They aren’t dwarfs, but they don’t grow as large as most medium breeds, such as Rexes. They reach 3.5 lbs to 5.5 lbs as adults when they’re between 6 and 7 months of age.

New Zealand rabbits are from California, and were traditionally bred for their meat and pelt. However, they are gaining popularity as pets and show rabbits.

A medium to large-sized rabbit, New Zealands are muscular and broad. Females (does) normally weigh 10-12 pounds, while bucks (males) are smaller, between 9-11lbs. They reach maturity around 9 to 10 months of age.

When Do Angora Rabbits Stop Growing?

Angora rabbits are best known for their long, luxurious coat, which has been bred to resemble wool. It grows continuously, and is exceptionally thick.

Some keepers of Angora rabbits collect the shed wool and use it to make socks, scarves, and sweaters. Many owners keep them for their companionship alone, though they still need to be brushed regularly.

There are several different types of Angora rabbit, ranging from small to large. The most well-known is the English Angora, a medium-sized breed. They grow to be around 5 – 7.5lbs as adults, reaching this weight between 7 and 8 months of age.

With Angora rabbits, their wool will continue to grow long after they’ve reached maturity. So, your rabbit may appear to be getting bigger and fluffier, even if their body mass doesn’t change.

French lop rabbits are one of the most popular breeds, created in the 1800s by breeding English lops with Flemish Giants. They were originally bred for meat, but became popular as a companion and show animals in the mid-1900s.

Considered a large breed, adult French lops are usually bigger than a domestic cat. Though they start small, they can reach 10-15lbs in adulthood. They grow quickly in their first year, normally reaching their full size by 10 months of age.

When Do Harlequin Rabbits Stop Growing?

Harlequin rabbits have stunning broken orange and black coats, similar in appearance to tortoiseshell cats. Other colors exist, such as black and white, nicknamed “magpie.” These variants are slightly rarer, but just as beautiful.

The Harlequin is a breed based on color, rather than body shape or fur. They originated in France, bred from badly-marked Dutch rabbits. They are now considered a breed in their own right, rather than a color variation.

Harlequin rabbits are medium-sized. They average between 6.5 and 9.5 pounds when fully grown. Does tend to weigh slightly more than bucks. They reach this weight, on average, when they’re 9 months old.

Holland lops, at full adult size, look like baby French lops. They have similar body shapes to French lops, including the long, floppy ears. But they are much smaller than their French cousins.

Originally, Holland lops were bred by breeding French lops, Netherland Dwarfs, and English lops. They are a newer breed, first recognized by the ARBA in 1979. They have become extremely popular as pets.

Holland lops are considered a dwarf breed. They typically reach 2.75 to 4 pounds as adults. They grow quickly, and reach their full size by 6-7 months of age. Despite their small size, Holland lops are active and need exercise.

The Netherland Dwarf is one of the smallest breeds of domestic rabbits in the world. As their name suggests, they originated in the Netherlands. They were originally bred from a rabbit that had a genetic mutation causing dwarfism.

Recognizable by their short skulls and tiny ears, Netherland dwarfs are popular as house pets. They don’t take up much space, and they are sociable and trainable. Unfortunately, as they are so small and fragile, they don’t make good pets for children.

The maximum adult size of a Netherland Dwarf rabbit is 4 pounds. Some weigh as little as 2 pounds, though many are closer to 3. They mature early, reaching their full size at 4-5 months.

Flemish Giants are thought to be the largest breed of domestic rabbit, originating in Belgium. They are also one of the oldest rabbit varieties, traceable back to the 1500s.

Most Flemish Giants are kept as livestock animals. They were deliberately bred to be as big as possible, to produce a large meat and fur yield. But because they are so gentle-natured, they also make excellent pets, providing you have space.

Because they are so large, Flemish Giants can take up to 18 months to reach their full size. The average Flemish Giant attains a weight of 14 to 22 pounds. To put this into perspective, this is about the same size as a Welsh terrier.