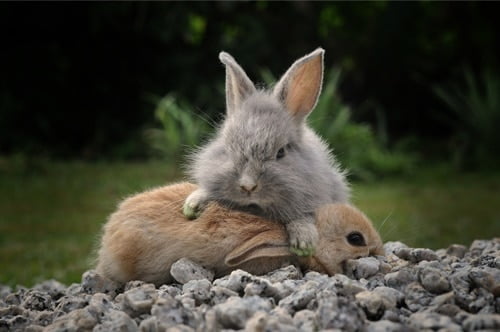 Rabbits have moods and experience changes in behavior. They have good memories and often remember their fights. You’ve probably noticed that some rabbits don’t fight at all for years and start fighting all of a sudden for no obvious reason.

In the wild, a buck rabbit (male) will fight for the right to breed with a doe (female). This ensures that only the strongest and healthiest bucks will produce the next generation.

Why Rabbits Attack Each Other

Rabbits sexually mature between 16 and 24 weeks. Smaller breeds mature earlier than larger ones. At 10 weeks, if two males are housed together, they’re likely to fight.

In the wild, European rabbits tend to live in large groups. One dominant buck may share his territory with many does and subordinate rabbit bucks. This is based on a burrow system with many entrances (a warren), according to Applied Animal Behavior Science.

When a rabbit buck reaches sexual maturity, he becomes more aggressive and territorial due to hormonal reasons and unsatisfied sexual frustrations. In the wild, a buck will fight with other bucks for the right to breed with female rabbits.

The urge to fight occurs as a result of an increase in testosterone in bucks, along with an interest in females. These fights can continue until the winner ends up with a doe or a group of does. Some battles can go on until one rabbit dies. It’s not unusual to see at least one rabbit getting injured.

Fighting for the right to breed is one way to ensure that the healthiest and strongest bucks are responsible for the next generation.

Territorial behavior may increase during certain times of the year, especially during the main breeding season for a rabbit, between January and August in the northern hemisphere.

Rabbits are also likely to fight for feeding grounds, especially if there isn’t abundant food.

Although rabbits don’t have large territories, they are known to defend the territory they have with vigor. Unwanted aggressive behaviors between rabbits often include mounting, circling, and biting.

Spaying and neutering your rabbits can drastically reduce aggressiveness in intact rabbits.  In most cases, once the social hierarchy is established, fights become much rarer. As long as the rabbits know their place and yield to others that are ranked higher, things go smoothly.

One major reason breeders place a buck in the does cage for breeding is to avoid fights. If a doe is placed inside a cage with more than one buck, there’s a high risk for a deadly battle. This is especially the case if the buck thinks he has to defend his territory.

It’s more common to see male rabbits fighting each other to the death than two females fighting.

According to Applied Animal Behavior Science, females are not territorial and are often found sharing their home space with many other does. Although rare, female rabbits can fight to the death.

Female rabbits are more likely to fight if one has an advantage over the other. For example, a dominant female rabbit may be of a larger breed or older than the one she is threatening. Her opponent may also be at a significant disadvantage if she is too old and weak.

Sudden introductions can also provoke fights between does.

Occasionally, a doe may fight with a buck. For example, if a buck wants to breed and the female rabbit isn’t receptive to breeding yet, she may show signs of aggression. In such cases, fights aren’t often serious and are less likely to cause serious damage.

If you notice two females fighting, or a male and female fighting, do not ignore the issue. With any gender, it is critical that you look out for signs of hostility.

Your rabbits must have a mentally and physically stimulating environment, with plenty of tunnels, boxes, hiding places, and toys.

Rabbits that don’t have enough space to hide from each other are likely to get frustrated and show aggression towards their cage mates.

Fighting can be triggered if food is scarce or if one rabbit is greedier than the other.

Rabbits are creatures of habit. Any changes in their routine, such as you going away and changing their feeding plan can stimulate aggression.

Owners who leave their pets, often report returning from their vacation to a cage full of ripped fur and unhappy rabbits.

Even though rabbit bucks have large home ranges, there can be large overlaps in space with other rabbits of both genders. Behavioral Processes found that rabbits may not display any behavioral response to the scent of a neighbor, but often discriminate against the scent of a stranger.

The best time to introduce rabbits is in the first few months of life before they reach sexual maturity. During this time, spaying and neutering is a must to prevent unwanted aggressiveness. Rabbits that are introduced later in life are likely to fight.

When you bring a new rabbit home, it is essential that you introduce it gradually to your existing rabbits. Rabbits are among the most territorial mammals. Skipping a slow introduction can result in major fights and possibly even death in one of the rabbits.

This is especially true if the newcomer is a baby rabbit. A young rabbit is less capable of defending itself against stronger adult rabbits.

Rabbits must be given a chance to bond properly. Abrupt introductions can be stressful to rabbits and can lead to irreversible, damaging results.

Are My Rabbits Fighting Or Playing?

Even bonded rabbits frequently have scuffles and disputes (tiffs.)

Of course, a normal tiff is entirely different from a fight, especially one that leads to death. When bonded rabbits fight, rebonding can be highly challenging.

Rabbits have sharp memories and are likely to remember their fights. Some rabbit owners report having no problems at all for years, and all of a sudden havoc erupts.

Paying close attention to your rabbit’s behaviors will help you identify whether your bonded pets are having a tiff or a fight. In most cases, acceptable tiffs do not require human intervention.

In most cases, it’s best to stay out of the tiff. Fighting is different, however. When you see unacceptable signs of aggression that may harm one or both of the fighting bunnies within a short timeframe, you must intervene immediately.

The following are some accepted tiff behaviors in rabbits:

Sometimes what appears to be a harmless quarrel between two rabbits, may lead to a potentially life-threatening fight. Signs to look out for include:

What To Do If Rabbits Start Fighting

You walk into a room and find your bonded rabbits fighting. What’s normally a calm and friendly environment has become a bunny battleground.

One rabbit is attempting to flee, while there other tries to get a grip of the opponent’s back end. They’re in a full-circle chase or the dreaded tornado.

Here’s what you need to do if you find your rabbits fighting.

Many rabbit owners believe that two perfectly bonded rabbits will never harm each other. They mistake a fight for play or a tiff. However, this isn’t always true.

Fighting rabbits can and usually do cause severe harm to one another. Not only can this result in physical trauma in your rabbits, but it can lead to high vet bills as well.

You’ll know that your rabbits are fighting if you notice fur on the ground, your rabbits actively chasing each other or biting to inflict injury.

You can easily stop a rabbit fight by clapping your hands together loudly and saying “eeeeeeek” in a high-pitched voice. Having a whistle at hand also does the trick.

Creating a high-pitched sound causes enough stress to disrupt your rabbits. If you have had bonded rabbits for a while, you’ll know that rabbits cling to one another when they are scared or stressed.

Stress bonding is a common technique used by owners to rebond their bunnies. It’s a theory that’s also used when taking unbonded rabbits together in a car ride.

However, understand that if your rabbits are in a serious fight, making a loud noise may not be enough to disturb them.

If making a loud noise doesn’t work, try to separate the rabbits yourself. Wrap your hand in a towel to protect it from scratches and bites while you break up the fight.

Rabbits are vicious when they’re fighting, with many of them fighting each other to the death. It’s always smart to err on the side of caution, no matter how bonded you are with your bunnies.

Assess Your Rabbits for Injuries

A rabbit’s thick fur can make this difficult, but be careful and do your best. Watch how your rabbit’s hop. Does it look normal, or is there a limp? Check the legs, hind area, face, jaws, eyes, and ears.

If you notice any injury or tear that requires medical attention, call your veterinarian as soon as possible. While assessing your rabbit’s injuries, make sure your rabbit has settled down and is calm. Pay attention to any area your rabbit grooms. Chances are it will lick the area that is hurt.

Keep your bunnies separated for a few hours or more as needed. Rabbits remember fights, particularly the bad ones. Fights that last just a few seconds can break up a close friendship because of a rabbit’s ability to remember its fights.

Never force rabbits to stay in the same space after a fight. It’s unlikely that they will bond again and may even have another big fight.

Pet fences or large housing crates set up in a way where the rabbits can still touch and have contact but cannot fight is perfect to help them settle down.

If the grudge is severe, they may continue to fight through the gaps in the pet fence or crate. If fighting through the fence persists, you may need to keep one rabbit in another space.

You can create a temporary block over your pet fencing by draping a towel over the fence. This will prevent them from seeing each other. Once your rabbits cool down, remove the towel and allow them to interact through the fence again. Pay close attention to make sure they don’t start fighting.

If your rabbits were previously bonded, chances are they will want to be together eventually. Sometimes you can separate them completely and still expect your rabbits to repair their bond within the same day.

Rabbits are good at remembering their fights and holding grudges for prolonged periods. A fight can replace good memories of a rabbit’s partner with bad ones.

Always take steps to reduce and if possible, prevent serious fights. If the fighting continues, rabbits that were once bonded will behave as if they were never bonded at all, causing stress to the owner.

What To Do If Rabbits Injure Each Other While Fighting

Separate the injured rabbit immediately to prevent additional harm to your bunnies. If the injury is severe and requires medical intervention, take your rabbit to a vet.

Rabbits that inflict severe injuries upon each other must be permanently separated. This is because, at this point, it may be close to impossible to rebond them.

If you introduce a differently sized breed into your household, always watch out for signs of fighting. Larger breeds attacking smaller breeds is a common issue seen in many rabbit homes.

How To Stop Your Rabbits Fighting

To improve the relationship between your rabbits, follow these steps:

Rabbits that were previously bonded are likely to rebond faster than rabbits that haven’t been bonded. Environmental changes, new rabbits in the house, and new behaviors can all lead to unwanted aggression between rabbits.