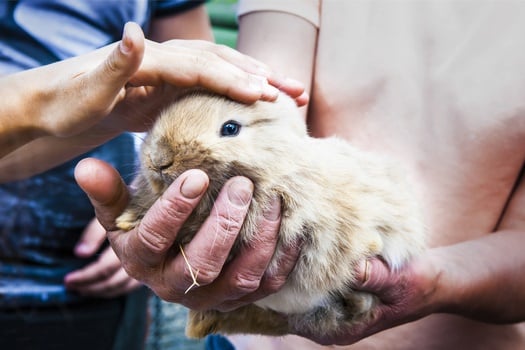 If you’ve got a strong bond with the mother, you can handle baby rabbits from birth. It’s sometimes necessary to pick up a baby rabbit, for example, when weighing or moving them. You should be gentle, and hold them as little as possible. Being picked up can be stressful for a rabbit of any age.

We’ll look at whether it’s safe to handle baby rabbits, and what age that handling can start. We’ll explain the potential risks associated with picking up small rabbits. We’ll also explain how to hold rabbits properly, and how often it can be done.

Is It Safe to Pick Up a Baby Rabbit?

Newborn rabbit kits are small and fragile. They’re born deaf and blind, with their eyes and ears closed. Baby kits can wriggle, squeak and suckle, but that’s about all.

It can feel a bit intimidating to pick up a newborn rabbit. They’re so delicate that it can feel as though you’re going to hurt them. And this is what can happen, if you’re not careful.

Rabbits’ bones are delicate, and are easily broken. This is especially true with rabbits. If you handle them too roughly, or accidentally drop them, they could get injured or die. Handling can also trigger stress in baby rabbits.

That being said, it’s often necessary to pick up baby rabbits, as a matter of life or death.

Baby rabbits, being tiny and hairless, can’t regulate their body heat. They depend upon being inside the nest, huddled up together and covered with their mother’s pulled fur. Occasionally, it does give birth to kits outside of the nest, or they may wriggle or fall out.

If so, you’ll need to pick them up to put them back into the nest. You should also pick them up each day to check their body condition, and weigh them. That way, you’ll realize if they’re not being fed.

To a certain extent, picking up baby rabbits is also beneficial for their socialization. If a rabbit is handled regularly from a young age, it will grow up to be more tolerant of humans.

However, you must be gentle and careful. Only pick them up when it’s necessary, and don’t hold them for longer than you need to.

What Age Can You Start Handling Baby Rabbits?

Providing you have a good relationship with the babies’ mother, you can start handling them as soon as they’re born. If the doe recognizes your scent and knows that you’re not a threat, she won’t mind.

Initially, you should only pick up the babies when it’s essential. For example, when you need to weigh them, hand-feed them, or return them to the nest.

Newborn rabbits are fragile, and can’t cope with too much human contact. If you can check on the kits without picking them up, you should do so.

Once the babies are three weeks old, you can begin to interact with them a bit more. You can pet them, allow them to hop into your lap and pick them up occasionally.

They aren’t so delicate at this age, so you can treat them more like you would an older rabbit. But be gentle, and watchful for signs of stress. Let your bunny initiate contact with you, rather than the other way round.

Never let children younger than ten years old pick up a rabbit. They may accidentally startle or drop the rabbit, or squeeze them too tightly.

Will a Rabbit Eat Its Babies If Touched by Humans?

You may have heard that mother rabbits will reject their young if they are handled by humans. According to myth, the presence of human scent will mask the babies’ natural smell. This means that the mother won’t recognize her babies, and she’ll abandon them, or even eat them.

Fortunately, this is untrue. Rabbits don’t abandon their young because of unfamiliar smells, particularly if they recognize the scent as their owner’s.

It’s true that some rabbits do abandon or eat their young. However, this is rare, and usually caused by immense stress or threat. Smelling your scent on her baby’s fur isn’t enough to trigger this behavior.

Does this also apply to wild rabbits? Can you touch a newborn rabbit if its mother doesn’t know you?

Wild rabbits won’t abandon their young just because they detect a foreign smell. However, it’s not advisable to touch them.

Because they aren’t used to interacting with humans, wild rabbits consider humans to be predators. Interfering with a wild rabbit nest puts the babies under a lot of stress. Also, the mother won’t feed her young while you’re around, as she’ll be too scared to approach.

How to Pick Up a Baby Rabbit

Rabbits are fragile, and they’re also easily scared. If you pick them up incorrectly, they could get hurt, or become stressed. It’s important that your rabbit feels comfortable around you, and trusts you.

Fortunately, it’s easy to pick up a rabbit safely if you know how. We’ll guide you through picking up a baby rabbit in 5 easy steps.

1) Get Down On Your Rabbit’s Level

Rabbits of any age can feel intimidated if you pick them up from a standing position. This is particularly true for rabbits that haven’t bonded with their owners yet.

Imagine if a giant were towering over you, and then tried to reach down and pick you up. You’d feel pretty scared, too.

Sitting down on the ground next to your rabbit feels far less menacing. It makes you appear smaller, for one thing. It also means that your rabbit doesn’t have to go as far up in the air.

Rabbits are only truly comfortable on the ground. Being on the ground means that they can run away from potential predators. The higher up they are, the more vulnerable they feel.

To start with, sit down on the ground near your rabbit. Stay there for a few minutes before you attempt to pick them up. They’ll soon get used to your presence.

If they’re old enough to hop around, they’ll probably come over and investigate you.

Because rabbits are prey animals, sudden movements and loud noises can be frightening. They’re naturally inclined to be wary of anything out of the ordinary. A sudden sound or motion could be a predator about to strike.

When you’re preparing to pick your rabbit up, speak in a quiet volume, and move slowly. Talk to your rabbit in a soft voice.

If your rabbit comes over to you, stay as still as you can and let them sniff you. If they seem unfazed, gently stroke them from the top of their head, moving back toward their tail.

It’s best to carry this out in a room where there are no other adults, children, or pets. The environment should be calm and quiet.

Anything potentially stressful could put your rabbit on edge. Picking your rabbit up will be anxiety-inducing in itself. So, you want to minimize stress as much as you can.

3) Gently Lift Your Rabbit From Underneath

If your rabbit seems comfortable so far, you can proceed to pick them up.

Your grip should be gentle, yet firm and confident.

You may find that your bunny struggles or attempts to jump out of your hands. This is a natural behavior, as rabbits often panic when picked up.

If this happens, set your rabbit down carefully and try again later.

Do not allow your bunny to jump out of your hands. Their bones are fragile and break easily when falling from a great height.

Never pick up a rabbit by their ears, tail, legs, or scruff of the neck. This is dangerous and could injure your rabbit. For example, it’s possible that your rabbit’s tail could come off.

4) Hold Your Rabbit Close to Your Body

Once you’ve raised your rabbit off the ground, bring them close to your chest.

Holding your rabbit close to your body helps them to feel secure. It also minimizes the risk of them wriggling out of your grip, and falling.

When walking while holding your rabbit, move slowly and carefully. Don’t run or walk too quickly, in case you trip. Moving too fast can also scare a rabbit into trying to escape from your arms.

Never hold your rabbit for longer than is necessary. Most rabbits dislike being held, no matter how old they are, or how much they like you. Look for signs of discomfort, including:

If you notice any of the above, set your rabbit down as soon as possible. Excess stress can be harmful or fatal for sensitive rabbits.

5) Carefully Set Your Rabbit Down

When you’ve finished holding your rabbit, place them carefully down onto the ground.

Continue to support the rabbit’s entire body while you lower them to the ground. Keep a firm and steady grip on them, so that they don’t preemptively jump out of your hands.

Once you’ve placed your rabbit onto the ground, give them a treat. This will help them calm down. It will also teach them to associate being held with being rewarded. In the future, they may be less nervous about being picked up.

A piece of apple, carrot or banana, about as big as your thumb, makes a tasty treat. Stay away from dried fruit, nuts, potatoes, and store-bought “rabbit treats.” These are often full of sugar (carbohydrates) and empty calories, and can upset your rabbit’s stomach.

You should only give treats to rabbits over eight weeks old. Baby rabbits’ digestive systems can’t cope with anything other than hay, pellets, water and their mother’s milk.

How Often Should You Pick Up Your Rabbit?

Now that you know how to pick up a baby rabbit properly, you can hold your bunny any time you like.

However, you shouldn’t pick up your rabbit more often than you need to. Rabbits are prey animals. Being picked up can cause them to panic, thinking they’ve been caught by a predator.

According to Oecologia, when confronted by a potential predator, rabbits’ bodies produce a physiological stress response. Stress chemicals are released, causing anxiety and heightened senses. In extreme cases, it can even cause cardiac arrest.

For almost all rabbits, being held triggers extreme stress. You should, therefore, avoid picking them up as much as possible.

There will be situations where you have to pick up your rabbit. For example:

In these situations, it’s justifiable to pick your bunny up. But make no mistake: they don’t like being held. Picking a rabbit up for cuddles may be enjoyable for you, but it isn’t for your rabbit. You can find out more crucial information in our baby rabbit care guide.

To show your rabbit affection, pet them while they’re on the floor, rather than picking them up. They’ll much prefer this, and be able to enjoy it without becoming stressed.