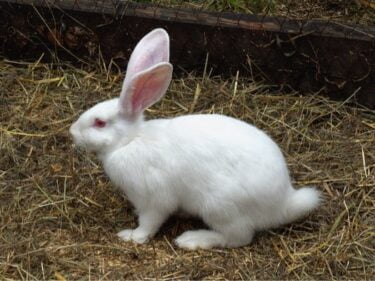 A rabbit’s tail, called a scut, is the most delicate part of their anatomy. It doesn’t take much for a rabbit to lose its tail. All the same, such a situation must be taken seriously. For a start, it will be a painful experience for the poor bunny. They are also likely to bleed profusely.

A rabbit will never lose its tail without external influence. They can be bitten off by the rabbit themselves or another rabbit. Human hands can easily pull off a rabbit’s tail, intentionally or accidentally. Your rabbit will not lose its tail naturally, though.

A rabbit losing its tail is not a fatal injury if the bleeding is controlled. Wild rabbits flash their tails to confuse predators, buying them precious seconds to flee. This will not be a concern for your domesticated pet. All the same, rabbit tails are delicate and must be handled carefully.

What Is The Purpose of a Rabbit’s Tail?

In domesticated rabbits, the tail is purely decorative. In the wild, rabbit tails are pivotal in their attempts to escape from predators.

All rabbits have white tails – even if they have darker-colored fur. This may seem like a counterproductive measure when it comes to survival. Surely a bright, white tail is like a target on a rabbit’s back?

This is true, but it works in the rabbit’s favor, as io9 explains. When a predator spots that white tail, it becomes their primary focus. That’s what they’ll chase, and follow with their eyes.

This means that a rabbit making a sharp turn to the left or right confuses a predator. For a few seconds, they’ll wonder where their tail went.

The predator will need to acknowledge the color of the rabbit’s fur, and relocate the tail. They’ll do so quickly. However, this will take a few seconds. This is time for the rabbit to race into safety.

Additionally, rabbits use their tails to communicate with others silently. Watch a rabbit in the wild the next time you’re out wandering.

When the rabbit spots you, they’ll invariably flee. As they do so, the rabbit’s tail will lean in your direction. This is a silent warning to other bunnies, pointing out the direction of a potential threat.

Naturally, none of this matters when discussing well cared-for domesticated bunnies. If you’re doing your job as a pet owner, your rabbit will be safe from predators.

Do Rabbits Shed Their Tails?

Rabbits shed their fur, like many household pets. What they will not shed is their entire tail. Bunnies will only lose their tail if forced.

Some of the things that cause a rabbit to lose its tail include:

If you think these scenarios sound traumatic, you’d be right. Just because domesticated rabbits can live without their tails, their scut is not expendable.

If a wild rabbit’s tail is torn off, they will likely not survive for long. They will have lost their tail through trauma. This means they are likely to be bleeding heavily. Rabbits cannot endure a significant amount of blood loss.

The same also applies to a pet rabbit that loses their tail – if they are not treated. By taking a rabbit to a vet, the bleeding can be stemmed. After that, provided your pet is not in shock, they’ll make a full recovery.

Why Would a Rabbit Bite Its Own Tail Off?

If you find your rabbit missing a tail seemingly at random, it will not have fallen off. What’s more likely is that your rabbit was biting at their fur, and took it too far.

Rabbits are lovable, but they’re not the brightest animals. They may not realize that they’ve pushed their luck. One moment a rabbit is plucking at their fur, the next they’re missing a tail.

Rabbits bite at their fur for various reasons. However, this can go too far. When rabbits pluck too much fur from themselves, it’s known as barbering.

The reasons that a rabbit bites their fur include:

Any of these symptoms should be addressed. Initially, you’ll make your pet much happier and healthier. Perhaps more importantly, you’ll stop your pet from excessive fur biting.

If your cat bites their tail off, have them seen by a vet as soon as you notice. The bleeding in this instance will be less severe than having it torn off. All the same, they’ll need some degree of medical attention, if only to prevent infection.

How Can I Stop My Rabbit from Barbering?

Providing a stimulating environment for your rabbit can stave off boredom. Ensure they have enough space to run and jump, and fill their hutch with toys.

Stress is a significant problem for many rabbits. They’re small and defenseless, and natural prey to many larger animals. This can leave a rabbit in a constant state of fear. Separate your rabbit from any cats or dogs in the family.

Parasitic infestations can be battled with spot-on treatments. Any pet shops will sell these. Don’t allow your rabbit to become infested with fleas.

Rabbits can also be prone to infestations of mites, which lead to skin disease. Fight these with treatment as early as possible. Skin conditions in bunnies vary in severity, but they’re never comfortable.

Check that your rabbit is enjoying enough fiber in their diet. Hay and grass will provide this, as well as providing entertainment. Hartz discusses the importance of fiber in a rabbit’s diet.

Why Would a Rabbit Bite Another Rabbit’s Tail Off?

Rabbits don’t just groom themselves. They also show affection for each other by grooming. Just like with their self-care, however, this can go too far. Rabbits do not always know when to stop.

Of course, this is assuming that the biting is benevolent. It’s possible that a rabbit would remove the tail of another as an act of aggression. Two rabbits sharing the same space can become surprisingly antagonistic.

If you notice two rabbits interacting with each other’s fur and tails, ensure that it’s friendly.

Rabbits should take turns to groom each other. If one rabbit is regularly grooming the other, it’s likely that they’re barbering them. This is a sign of dominance over a more submissive bunny.

Also, be careful when two rabbits chase each other. Sometimes, this is all in good fun. On other occasions, it’s a precursor to violence. If one rabbit builds a head of steam and becomes aggressive, they’ll bite the other’s tail.

The response to this is mainly similar to rabbits biting off their own tail. They’ll need medical attention, if only as a precaution.

You’ll need to keep the two rabbits separate in the future. It will be tough for these bunnies to bond after such an interaction.

Can a Rabbit’s Tail be Pulled Off?

Pulling off a rabbit’s tail sounds like a barbarous act. It’s worrying easy to do with human hands. It’s pivotal that rabbits are handled very delicately.

If you have young children, instill this lesson in them as early as possible. If a child yanks on a rabbit’s tail, they’re likely to pull it clean off.

Equally, if your rabbit gets their tail stuck, it could be pulled off. This may happen in a hutch door, for example. It’s rare, however, as rabbit tails are not long.

What Happens if a Rabbit’s Tail is Pulled Off?

The first thing that will happen is bleeding. Your rabbit will have experienced significant trauma. This will need to be seen, and dealt with.

Another concern about a rabbit that has had their tail pulled off is spinal damage. The tail of a rabbit is connected to its back. Rather than biting, which involves a clean severance, pulling places strain on the spine.

If a rabbit’s tail is pulled off by strong force, damage to the nervous system may follow. This is most likely to manifest in the rear legs of the bunny.

Thankfully, this is far from a foregone conclusion. Rabbit tails are delicate and can be pulled off without significant force. A lighter tug, while painful, is unlikely to result in spinal damage.

Do Rabbit Tails Grow Back?

Once a rabbit loses its tail, it’s gone for good. This is why they must be handled with such delicacy.

This also means that the loss of a rabbit tail should be taken care of quickly. Leaving the wound to heal itself will not encourage regrowth. It will just pose increased risks of infection in the wound site.

Thankfully, a rabbit losing its tail is not life-threatening. All the same, there is nothing to gain by encouraging your pet bunny to remove theirs.

Can a Rabbit Live Without its Tail?

A domesticated rabbit can live a full and contented life without its tail. Rabbit tails are not linked to balance, spatial awareness, or activities associated with other animals.

This does not mean that you should ignore the risks of a rabbit losing their tail, though. If they’re biting at it, it suggests that they are living in physical or emotional discomfort.

Equally, you’ll still need to handle a rabbit very delicately. Pulling a bunny’s tail will usually end in disaster. There is nothing to gain.

The loss of a tail is a much more significant concern for wild rabbits than domestic pets. As the tail is mostly a defense mechanism, it’s redundant for house bunnies.

As discussed, a tailless wild rabbit will find themselves increasingly at the mercy of predators. Your rabbit should be safely secured in a hutch or run!

Should a Rabbit’s Tail Be Cut Off?

There is no reason to cut off your rabbit’s tail unless instructed by a healthcare professional. A severe parasitic infection, for example, may necessitate tail amputation before it spreads too far.

Also, some rabbits may need to lose their tail if it gets in their way. This is common in rabbits with hind leg weakness or problems.

A rabbit with reduced function with their hind legs will struggle to sit comfortably. They’ll find that their tail gets in the way, tucking under their belly.

This can be frustrating for a rabbit, which may turn to self-mutilation to solve the problem. A professional amputation would be better. A vet can remove a rabbit’s tail comparatively painlessly.

Are Rabbits Ever Born Without Tails?

Technically, all rabbits are born without a tail. When a baby rabbit is born, they are devoid of any fur. This means the tuft of fur that makes up their tail is not yet in place.

By the time a rabbit reaches 9 or 10 days, they will resemble the furry critters that we know and love. This means that they will also have a tail by this point.

There is no breed of mature rabbit that does not have a tail. Tails are an essential survival mechanism for most rabbits. As prey animals, bunnies need as much help as they can get in this regard.

Rabbits are fragile animals, and their tails are the most delicate part of their anatomy. They may not be pivotal to a rabbit’s life, but that doesn’t mean they’ll enjoy losing them.

Always handle a rabbit, and their tail especially, with care. Rabbit tails do not just fall off, any more than human fingernails do. They must be pulled or bitten to be removed from the body.

If your rabbit does lose its tail, it’s not the end of the world. What matter is how you react. Get your pet the medical attention they may need, and stem any bleeding.