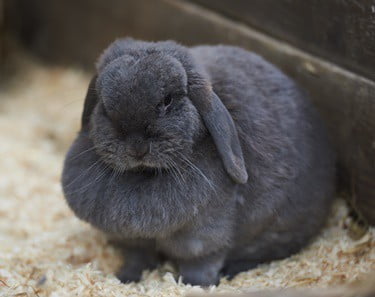 The dewlap is an extra flap under the chin of a rabbit that contains fatty tissue. It is commonly found in female rabbits (doe), but a much smaller percentage of male rabbits may also have smaller dewlaps.

The dewlap is a fold of skin found in female rabbits once they become sexually mature. This allows a rabbit to prepare for the arrival of new babies as she pulls out her own fur from her dewlap to line the nest.

Dewlaps are less pronounced in female rabbits that have been spayed at an early age, and are most common in large rabbit breeds, such as the Flemish Giant. Although the dewlap contains some topical fat, it doesn’t necessarily mean that a rabbit is overweight or obese.

Contents show
What’s the Purpose of a Dewlap in Rabbits?
Rabbit Breeds with Dewlaps
Do Male Rabbits Have Dewlaps?
Does a Dewlap Mean My Rabbit is Overweight?
Hair Pulling in Rabbits
What Are the Different Health Issues with Dewlaps?
1/ Improper Grooming
2/ Wet Dewlap
Related Articles:

What’s the Purpose of a Dewlap in Rabbits?

A dewlap tends to occur once a rabbit has reached sexual maturity and can begin to reproduce. An expecting rabbit goes through a period of nesting before the arrival of her babies. During this nesting stage, she may pull out her own fur to line and insulate her nest. The dewlap provides a place for a rabbit to pull out this fur during her nesting stage.

A rabbit’s nest is where a female rabbit will sleep, produce her offspring, and raise her babies. Lining it with fur, makes the nest warm and comfortable for the mother rabbit and her babies.

Dewlaps are most common in female rabbits and large rabbit breeds. Rabbits with looser skin (such as Lops and Flemish) are also more likely to have more prominent dewlaps.

Some breeds, such as the Belgian Hare, have a dewlap more often than other varieties of rabbits. To meet breed standards, females of certain breeds need to have dewlaps. They include:

It’s allowed for male French lops to have a small dewlap, but this isn’t favorable among breeders.

Some breeds are allowed to have dewlaps, but this isn’t a necessary feature for breeders. They include:

Breeds that are not allowed to have big dewlaps include:

According to the ARBA, if a rabbit from the following breeds has a dewlap, it will be disqualified from a show:

Do Male Rabbits Have Dewlaps?

Male rabbits can have dewlaps too, even though they’re often far less pronounced than in female rabbits.

Bucks with dewlaps are considered to have higher estrogen levels than other male rabbits and are thus, not used for breeding.

Their higher estrogen levels may be a result of them being neutered before puberty. Rabbits that have been neutered after puberty are more likely to have less estrogen and much smaller dewlaps, if any.

Does a Dewlap Mean My Rabbit is Overweight?

The more overweight a rabbit is, the bigger its dewlap will be. This is true for overweight male rabbits as well.

Note that even though overweight rabbits are more likely to have dewlaps, having a dewlap does not necessarily mean a rabbit is overweight.

Unspayed female rabbits, larger breeds of rabbits and rabbits with looser skin are more likely to have dewlaps than other types of rabbits, whether they’re overweight or not.

However, if you suspect your rabbit has an excessive dewlap due to being overweight, speak to your vet about a weight loss plan.

Your vet may recommend reducing treats, fruits, and low-fiber or starchy vegetables from your rabbit’s diet.

In most cases, when a rabbit loses weight, it’s dewlap will reduce in size as well. Keep in mind that it is normal if your rabbit continues to have a small dewlap even after it has lost weight.

A dewlap is a small skin fold under the chin that may persist in many rabbit breeds, especially after a dramatic weight loss.

Hair pulling can be disturbing for most first-time owners, but this is completely normal. A female rabbit will pull hair from her dewlap during her nesting stage.

Even if your rabbit has been recently spayed, she may go through a phantom pregnancy and perform the same nesting rituals as an unspayed, expecting female. This is due to the sexual stimulation or stress that results when a female ovulates, convincing her that she is pregnant.

However, if your rabbit pulls its hair out from the dewlap and does significant damage to the skin underneath, take it to a vet immediately.

What Are the Different Health Issues with Dewlaps?

There are two major concerns related to having a large dewlap:

If your rabbit is overweight or has a large dewlap it may have difficulty grooming itself and even eating.

When a rabbit isn’t able to groom itself, it may have leftover food or debris trapped between the folds of its dewlap. This can cause bacteria to develop, leading to infections.

If your rabbit’s large dewlap is a result of it being overweight, you may have to put it on a diet. In severe cases, your vet may recommend surgery to reduce the size of the dewlap.

If your rabbit has a large dewlap because of reaching sexual maturity or because of its breed, grooming it regularly can help prevent any issues from occurring.

You’ll have to groom your rabbit’s dewlap more during the shedding season to prevent it from getting dirty and matted. Surgical reduction of the dewlap may still be necessary in severe cases.

In older does, the dewlap is often mistaken for an abscess. It is common for moist dermatitis and skin fold dermatitis to develop in the dewlap.

What Are the Causes of Wet Dewlap?

The dewlap is the sagging skin located under your rabbit’s chin. When the dewlap is constantly wet and isn’t allowed to dry completely, it can easily get irritated and inflamed. Over time, the dewlap skin can become infected.

The dewlap may get frequently wet for the following reasons:

According to the Journal of Small Animal Practice, overgrown teeth or dental disease may lead to hypersalivation in rabbits.

This leads to a wet chin and dewlap. Saliva can be corrosive, if left on the skin for prolonged periods, causing irritation and open sores on the skin.

What Are the Symptoms of Wet Dewlap?

One obvious symptom of moist dermatitis is hair falling out of the affected area, such as the dewlap. The exposed skin will look raw, red and sore.

When the skin becomes infected, it may turn green. The sores will also attract flies that will lay eggs in the area. If the condition progresses this far, you’ll notice maggots crawling on the dewlap.

How is Wet Dewlap Treated?

If you deal with your rabbit’s condition in its early stages, treatment is often easy. Your vet will most likely shave or trim the fur from the dewlap so that the skin can dry more effectively.

An antibiotic powder may also be dusted on the skin to prevent it from getting infected. Your vet will also give you further instructions on how you can prevent excess moisture on your rabbit’s dewlap.

When the condition progresses, it can be harder to treat it. Your vet may put your rabbit on systemic antibiotics to treat the infection. Many antibiotics aren’t safe for rabbit use.

How to Prevent Wet Dewlap

The most effective way to prevent moist dermatitis in the dewlap is to keep the area dry. Here are some tips:

If your rabbit does have a dewlap, it is important that you groom it regularly and keep it dry to avoid irritation and infections.

If your rabbit is overweight and has a dewlap, consider putting it on a diet to avoid grooming problems in the future.

1 thought on “Why Do Rabbits Have a Dewlap?”