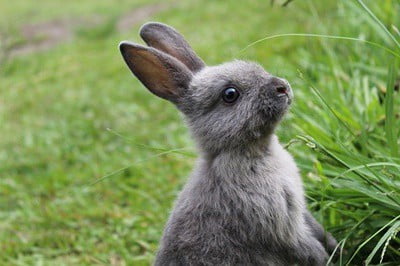 A rabbit’s behavior can be expressive, and it does not take long to understand what it’s trying to tell you. You can tell how your rabbit is feeling by watching how it acts. The rabbit binky is one such action.

A rabbit will binky when it feels really happy or excited. Binkying looks like a large jump in the air while the rabbit slightly twists its body and head at the same time. A binky can also look like a sharp flick of its head accompanied by a small ear wiggle. A rabbit that feels safe and secure in its home is more likely to binky around.

You cannot teach your rabbit to binky as it is an inherent behavior. Rather, a rabbit will only binky when it feels like it. Additionally, a rabbit will have its own likes and dislikes when it comes to foods, toys, and ways of playing with you and other rabbits.

There are 2 types of rabbit binkying: the full binky and the half binky. A full rabbit binky is characterized by a sudden, unprovoked leap into the air and a simultaneous, small twist of its body and head in opposite directions.

This can be accompanied by either a running start or simply occur on the spot where it stands. A rabbit can do at least 2 or more full binkies in the air before falling back to the ground if it is really excited. It may even become so overzealous that it will do multiple binkies in succession.

A half binky, on the other hand, is characterized by a sharp flick of its head that makes its ears wiggle. Keep in mind that both types of binkies indicate happiness or excitement. Just because a rabbit only does a half binky, it does not mean it is half as happy as it could be.

Unfortunately, some owners may confuse a half binky with the symptoms of head tilt or itchy ears. According to the University of Miami, head tilt (also known as torticollis or wryneck) is a condition where a rabbit’s neck twists and makes its head tilt towards one side. This is usually caused by:

The difference between a true binky and a head tilt issue is the fact that a rabbit can easily correct its posture after a binky, but head tilt cannot be fixed on its own.

A rabbit will binky whenever it feels super-happy or excited. This can be caused by any number of factors both within and outside of a rabbit owner’s control. The most a rabbit owner can do to encourage your rabbit to binky is to create a safe, quiet environment for it to explore and thrive in.

A rabbit that feels as if all its needs are being met is far more likely to binky than a rabbit that gets the bare minimum care from its owner, after all. It is actually quite easy to make a rabbit feel happy enough to binky for you. A rabbit may binky whenever:

Despite their shy nature, rabbits are social creatures that love attention and being around other rabbits. This is why it is important to pair rabbits together rather than getting just the one.

According to Applied Animal Behavior Science, paired rabbits tend to move around their hutches a lot more than rabbits without companions. This means that if both rabbits come to love each other, you can expect a whole bunch of happy binkies from these rabbits one after the other.

Sometimes a rabbit will binky seemingly for no reason. Perhaps it just feels so much joy that it has no other outlet to express it than through some vigorous binkying.

Do Rabbits Binky in the Wild?

Wild rabbits do, in fact, binky from time to time. Unfortunately, wild rabbits will binky for reasons outside of being happy or excited.

Binkying for wild rabbits is a defense mechanism that makes it that much more difficult for predators to catch them. This wild binkying may also be accompanied by the rabbit running in an unpredictable, zig-zag pattern.

If you chase your rabbit around as a form of play, you should make sure you are not scaring it into thinking you are a predator. To do this, you should kneel down to its level and call its name or tell it to come over to you.

If your rabbit does so without hesitation, then you will know that it understands your chase is all a game. It is also a good idea to soothe your rabbit with soft, calming pets after each “chase” to let it know that you are not a threat and that you are just playing.

Do Rabbits Binky When Scared?

When a rabbit is scared, it will not binky at all. According to the University of Georgia, a scared rabbit is actually less likely to move around and will try to hide instead. This fear could be caused to a number of different factors such as:

It is crucial for a rabbit to feel safe in its home, or it may feel constantly stressed and may never binky. The first step towards making a rabbit feel comfortable is to properly socialize it around you and your family.

This typically means that you must let your rabbit explore its new home on its own. Kneeling or lying on your stomach quietly until your rabbit approaches can help it learn that you are not a threat, and it will begin to feel a lot more comfortable around you.

You should also make sure to never startle your rabbit by yelling or screaming, even if it has disobeyed you. A rabbit will not respond well to aggression or loud noises, so you must be patient and quiet if you ever hope to see it binky one day.

What Do Rabbits Do When Scared?

A scared rabbit will display its fear through different sorts of body language. Usually, it will just run away and hide, though there are other behaviors a rabbit may exhibit, too.

Sometimes a rabbit will stand up on its hind legs when it is scared. This standing allows it to get a better look of the area as well as catch any sounds further off. Standing on its hind legs can also indicate mere curiosity, but if it is accompanied by fast breathing, wide eyes, and a loud stomp of its foot, then your rabbit is definitely scared of something.

Additionally, stomping its back feet is another sign that a rabbit is feeling scared or stressed out. In the wild, this stomp, also called a “thump”, is used to alert other rabbits that a predator is close by. If your rabbit thumps its back legs, you should do your best to calm it down so it knows that it is not in any danger.

While most rabbit behavior is displayed with its body language, there are a few different ways a rabbit will vocalize its fear as well. For instance, a scared rabbit may squeak or even scream.

A rabbit screaming is very rare and only occurs when it is in extreme pain or terror. If your rabbit ever vocalizes its fear, you must back off and create as quiet an environment around it as possible until it calms down itself.

How Often Do Rabbits Binky?

Rabbits only binky when they are feeling energized and happy. Given their overall quiet nature, it can be difficult to predict when and how often a rabbit will binky. The best thing to encourage your rabbit to binky more often is to make it feel safe and comfortable in its new home.

A rabbit’s hutch or cage is where it will spend its time, so you need to make sure it is comfortable for it to rest in. Make sure your rabbit’s hutch:

If it feels comfortable in its hutch, it may even binky up to the front to catch your attention whenever you approach.

Of course, your rabbit will feel much better if it can spend plenty of time outside of its hutch as well. According to the University of Florida College of Veterinary Medicine, the rabbit is a crepuscular animal, which means that it will be the most active at around dawn and again at dusk. Letting your rabbit exercise and play both inside and outside your home during these times will definitely make it feel more inclined to binky everywhere.

A rabbit may also start binkying whenever it is time to eat or it knows it is about to get a treat. Keep in mind that no matter how cute you might think a rabbit looks while binkying, you must limit its treat intake. Overindulging in sugary treats such as fruit can make a rabbit sick and even lead to obesity. It is best to feed a rabbit a diet of dark, leafy greens and unlimited amounts of hay and water instead.

It is important to note that how often a rabbit will binky can also depend on the rabbit’s individual personality and temperament. If your rabbit is quite excitable, then it is more likely to binky a lot. If your rabbit is more laid-back, then it can still binky, but will choose to do so less often. Binkying ability may also depend on the rabbit’s age as well.

Older rabbits may use up their energy to binky all over the place. In fact, older rabbits that have become more accustomed to its human owner and its home may actually binky more than when it was younger.

This mainly applies to older rabbits that have maintained their health. Older rabbits that suffer from health conditions like obesity, dental issues, heart conditions, and poor bone health might not have the strength or the desire to binky anymore.

How To Make Your Rabbit Binky

Rabbit binkying is not something you can specifically make your rabbit do on-command. Binkying is an inherent behavior that your pet rabbit will do whenever it feels up for it.

Indeed, training a pet rabbit to binky the way you might train it to perform any other trick might prove a near-impossible task due to how infrequent its binkying can be. Even feeding a rabbit treats after it binkies will not necessarily mean it will learn to associate treats with binkies.

You can try to mimic the binkying motion by sticking your fingers over your head and shaking it in the same way a rabbit would when binkying. If you feel bold enough, you can even jump a little at the same time to show your excitement. This might make your playful rabbit want to copy you and binky more often, though it is not a guarantee.

The most any rabbit owner can do to “make” your rabbit binky is to care for it as best you can. Proper care, enough exercise and playtime during the day, and eating the right foods will help a pet rabbit feel happy enough to want to binky.

If you noticed that your rabbit has stopped binkying, then it may not feel safe or something is bothering it. It is best to figure out the source of discomfort and then remove it so that your rabbit will start binkying again.