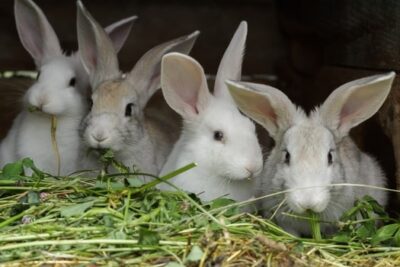 When we visualize rabbits, we imagine docile animals contentedly hopping around. For the most part, this is an accurate portrayal. However, if one rabbit annoys or irritates another rabbit, a fight can break out.

Rabbits are territorial animals, so hierarchy is very important to them. Two rabbits will often battle over dominant status. Also, rabbits are prey animals. Should they feel threatened, they’ll fight hard to survive. This survival instinct can lead to aggression between rabbits as they may squabble over food, water, attention, and territory.

We’ll now explore the different reasons why rabbits fight one another, and how to differentiate between belligerence and social bonding.

Are Rabbits Aggressive Towards Each Other?

Rabbits are not aggressive by nature. It’s one of the many advantages of having a pet rabbit. If rabbits are left to their own devices, they’ll usually be entirely content and docile the majority of the time.

When a rabbit senses a threat to its safety, this can quickly change. Don’t be fooled by their sweet appearance. Their teeth and claws hurt, and two rabbits can fight to the point of injury and mutilation.

Why Are My Rabbits Biting Each Other?

Biting is not always an act of aggression. However, if your pet rabbit is behaving aggressively, it can turn nasty. Rabbits are more than capable of tearing large clumps of fur from each other’s bodies.

Rabbits take the protection of their home and territory seriously. If they feel that another rabbit is attempting to steal their territory, they’ll fiercely defend it. Another common cause of aggression is establishing dominance. Like all pack animals, rabbits live by a strict hierarchy.

Any warren in the wild will have a leader, and the same goes for multiple rabbits kept in captivity. This dominant rabbit will get to eat first and be groomed by subordinate rabbits. Naturally, every rabbit wants to be in this position. This means that they may need to fight for social status.

Captive rabbits may also be frustrated with their lack of freedom. Rabbits need exercise and to embrace their natural instincts. Taking this freedom from a rabbit leaves it with an excess of energy that cannot be expended. This, in turn, can lead to aggression between rabbits.

Hormones also play a part in rabbit aggression. You will no doubt be aware of the saying, “mating like rabbits.” Female rabbits, in particular, have a biological urge to reproduce and raise young. Unfixed males will be aiming to mate. Rabbits can grow frustrated and aggressive.

Is your rabbit in pain? As prey animals, rabbits are cautious about revealing any sign of weakness. This means that they may consider attack the best form of defense.

Should I Keep My Rabbit Alone to Prevent Fighting?

In theory, the solution to fighting rabbits is keeping them alone in a pen. Ironically, rabbits are at their happiest when kept in pairs. Despite the fighting, they thrive in social settings.

This is understandable when we think about a rabbit in the wild. These animals live in warrens with dozens of fellow bunnies keeping them company. Alone time is an alien concept to wild rabbits.

A rabbit forced to live alone can become very stressed, lonely, and depressed. No matter how much care you put into your pet parenting, rabbits need friends of their own species.

They should always live in pairs, at least – provided you take the appropriate steps. If your rabbit is going to live alone, keep them indoors in a busy area. This way, they’ll at least receive the stimulation of human interaction and company.

How Can I Stop My Rabbits from Fighting?

To keep rabbits from fighting, you need to understand why they are attacking each other. To summarize, common explanations for aggression include:

To bond two rabbits, allow them to live side by side in separate hutches. This means that they’ll become familiar with each other’s scents.

After a while –assuming both rabbits are spayed or neutered – introduce them in a neutral area. This means somewhere that neither rabbit has been before, so it’s an unclaimed territory.

If the rabbits ignore each other, that’s fine. It’s better than having two fighting rabbits. You should supervise the rabbits, give them a while, then return them to their respective homes. Keep repeating this process, and look out for bonding signs. According to the UK’s RSPCA, these include:

The latter step, especially, is key. You may also find the rabbits sleeping back-to-back in their enclosures, despite being separated by wire.

However, also look out for negative behaviors. If you recognize any of these actions, separate the rabbits and try again another day:

Once two rabbits bond, they’ll be friends for life and happily share an enclosure. This should be a new, neutral home, however. Placing both rabbits in an enclosure that previously house just one can reset the entire process.

Once bonding occurs, you should never separate the rabbits unless they fight – which is unlikely. Until such a time, however, they must be kept separate for their own safety.

Spay and Neuter Your Rabbits

Female rabbits suffer most from reproductive hormones. They will become extremely territorial and aggressive, rejecting any kind of company.

The only exception is if an intact male initiates mating. Even once that is done, however, the female will grow aggressive toward the male. They want to be left alone to raise their babies.

An unfixed male is not much better, though. If a male rabbit cannot mate, they’ll be a bundle of hormones on four legs. They’ll likely hump anything they can reach to relieve their frustration. Mounting can also be an attempt at establishing dominance, though, even in neutered males.

Many rabbit experts recommend mixed-sex pairings, however, if both parties are spayed and neutered. If a neutered male mounts an unspayed female, the latter will grow extremely aggressive.

Not only the male attempting to claim top rabbit status, but they’re also not providing the female with what she wants. Female rabbits usually end up taking control in a mixed-sex pairing, though.

A spayed female will often tolerate the mounting initially, then put the male in his place. From here, the rabbits can begin making friends.

Your rabbit will want to hop, jump and explore. Being crammed into a hutch that’s barely big enough to stretch makes a rabbit very cantankerous.

Your rabbit should spend at least five hours each day exercising. Naturally, however, they need to be contained. Rabbits are naturally curious, and not the smartest animals.

Left unattended, rabbits could chew through electrical cables and other hazards. If your rabbit plays in the yard, they’ll need to be contained. If they get loose, they will not last long in the wild.

In addition to space, your rabbit’s home should have plenty of stimulation. Rabbits get bored very easily. This could lead to depression – or, if they are sharing their home, frustration, and aggression.

Toys should be plentiful. Cat toys are safe for rabbits and make a good size. Equally, rabbits to hide and make noise. You should fill their enclosure with paper bags and cardboard tubes or boxes.

You should also attach wooden toys to your rabbit’s cage to gnaw on. This is both entertaining and a great way to file down their perpetually growing teeth. Plenty of bedding to dig through will also keep your rabbit amused, and satisfy their instincts.

Another way to ensure a rabbit remains entertained is to hide food pellets around their home. Your rabbit will enjoy hunting for their meal, rather than munching from a bowl.

What’s even better is to hide your rabbit’s food in the hay. Hay should make up at least 90% of your pet’s diet anyway. Anything else they find can be treated as a bonus.

Rabbits need to see a vet regularly, just like any pet. At the minimum, once a year is advisable. A vet will observe your rabbit’s weight and general health, ensuring that everything is in order. Remember, a sick or pained rabbit can become aggressive.

It can be tricky to find a vet that understands rabbits. Despite being the third most popular pet in the United States, rabbit husbandry remains niche.

It’s also worth taking out an insurance policy to cover health issues in rabbits. Like any pet, bills can quickly mount if your rabbit gets injured or falls sick.

Are My Rabbits Fighting or Playing?

Not all rabbit biting is based upon aggression. Like many other animals, rabbits often nip and play fight as part of their bonding.

Nipping is also linked to mating. Even a neutered male may nip and mount another rabbit – male or female. This is an act of dominance, not lust. Even so, it needs to be managed carefully.

These behaviors are linked to playing, or simple tiffs that are resolved by the rabbits themselves. They can be considered safe, provided they do not escalate:

The latter is the most oft-confused action, as it can be mistaken for chasing. Chasing, sadly, is a very different affair and must be taken seriously.

My Bonded Rabbits are Chasing Each Other

Even bonded rabbits can fall out, and chasing is a sure-fire sign of this. Chasing each is different from following each other. Submissive rabbits will often follow their leader, hopping wherever they go. Chasing, however, involves picking up the pace and intending to lunge and bite.

Bonded rabbits chase each other and fight for various reasons. It’s positive that a submissive rabbit now wants to take the dominant status. One of the rabbits may be sick or in pain, and is thus acting uncharacteristically aggressively. One or both rabbits may also be under stress, and are acting out.

You should separate the rabbits. Make a loud noise to distract them, and return each rabbit to a separate home. Ideally, these should be side-by-side.

This will enable you to understand if the problem is permanent. If the rabbits keep fighting through the wire of their pens, it suggests the friendship is over.

Rabbits have very long memories, and do not forgive easily. If they leave each other alone, however, attempt re-bonding using the steps we discussed elsewhere. If they fight again, keep them separate. These once-bonded rabbits are unlikely ever to get along again.

Overall, rabbits are loving and docile creatures. However, they are hardwired to defend themselves and their territory. This means that they will never cope will with infiltrators.

Also, rabbits like to live by a firmly established pecking order. Nature abhors a vacuum, and at least one rabbit will always seek to take up a leadership position in a group.

This can lead to fighting – but frequently, it can lead to lifelong friendships. When it comes to rabbits, letting them bond before living together can make all the difference. Keep this in mind before housing two rabbits in the same enclosure.

1 thought on “Why Do Rabbits Attack Each Other?”