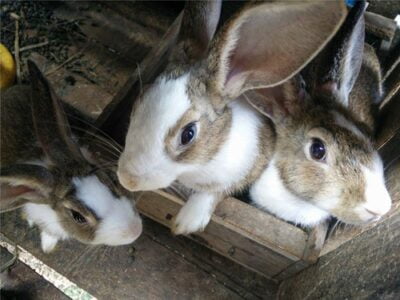 Noises rabbits make when happy include purring, sighing, and honking (grunting or oinking.) Distressed noises in rabbits include a loud yelping or squealing, or even screaming. If your rabbit is angry, it will growl. Rabbits make noises to communicate what they think or feel.

Rabbits make noise to communicate. Different noises usually relate to emotional states that your rabbit may experience. Understanding the differences will help you to meet their needs.

What Do the Noises Rabbits Make Mean?

Mammals use a variety of means to communicate. Gestures, noises, and behaviors are all crucial. Rabbits use all three of these communication methods to let you know what they think and feel. By ‘decoding’ these noises, you can identify whether your rabbit is sick, hungry, or happy.

Grunting or honking is the most common rabbit noise. You will most frequently hear it from unneutered males. It indicates that the rabbit wants to mate. You may also notice the noise alongside other signs of this behavior, including:

Your rabbit may also hop around your feet and honk to get your attention. In the case of an unneutered male, the only way to get it to stop making this noise would be to neuter him.

It’s a difficult sound to describe unless you hear it. You might think of it as a rabbit oinking noise.

You will also notice this noise from females and neutered males. Honking is a general sign of excitement. So, for example, if your rabbit sees you approaching with some food that they like, then they might honk because they’re looking forward to eating.

This is a noise that your rabbit makes when it’s contented. So, you might hear it semi-frequently when your rabbit is dozing or when it’s happy with what it’s eating. This noise is less common.

The noise isn’t made in the same way. While cats purr by making a rumbling noise in their throat, rabbits can’t do the same. Instead, they make a low-pitched ‘clacking’ noise with their teeth.

Like cat purring, this is a sign that your rabbit is happy and contented. You’ll most likely notice it when you’re stroking your rabbit when they’re happily sat in your lap. The noise will come and go, but will be accompanied by other visual signs of contentment.

This is a sign of contentment. Your rabbit will be sat comfortably and in a relaxed position before taking a deep breath in and letting it out slowly.

Why this is the case isn’t clear. It’s a common sign of happiness for other household pets, or even people. But why taking a deep breath is a sign of being relaxed isn’t clear.

Perhaps it’s because when you’re stressed, your breathing gets quicker. Breathing slowly and deeply is the opposite of that. But the reason for one big sigh isn’t known.

Growling in rabbits means the same thing as it does in other animals. It’s a defensive noise that the rabbit is using to try and threaten you. Growling is usually accompanied by other noises, e.g. it’s preceded by a snort. A rabbit may make growling noises:

Growling is a bad sign, and something you should try to avoid. Fortunately, it’s easy to make a rabbit feel more comfortable. All it takes is being a little more conscientious of your behavior.

So, for example, rabbits growl when they feel threatened. To make a rabbit more comfortable, approach it from a lower level. Make yourself look smaller and move slowly. Don’t touch the rabbit or pick it up if it growls to ‘comfort’ it as this makes the problem worse.

Similarly, if you’re too near its food, move away. Don’t worry, because there will definitely be times when your rabbit is more comfortable with you. But first, it has to learn that you aren’t a threat.

Growling is more common than hissing. But if growling doesn’t deter a predator or threat, then the rabbit has to try something else.

Hissing sounds exactly how you think it might. Your rabbit hisses like we do, by blowing air quickly between its tongue and teeth.

Because it’s a noise that a rabbit makes when it feels aggressive or threatened, other angry behaviors accompany hissing. Your rabbit will likely both growl and hiss. They may also nip at you to get you to go away.

You need to distinguish rabbit purring from the grinding of teeth. Teeth grinding means that your bunny is in pain, or at least discomfort. This sound is louder and more frequent than purring.

Look for other signs of contentment or discomfort. If your rabbit is hunched over, shows aggressive behavior, and/or is excessively jumpy, then it’s grinding its teeth, not purring.

Not all the noises a rabbit makes come from its voice box. A rabbit can also make a noise by stamping its big back feet. This makes a surprisingly loud noise.

Rabbits do this when afraid or nervous (which can be a frequent occurrence). The point of this noise is communication. The rabbit is letting other rabbits nearby that there’s a threat not far away.

Rabbits can squeal and scream, but these aren’t noises you’re likely to hear often. A sniffle and a sneeze are semi-regular occurrences. And if your bun is happy, then you’ll hear lots of purring and honking. Squealing and screaming aren’t as common.

Squealing occurs when the rabbit is in exceptional discomfort. The rabbit may squeal if you’re holding it and refusing to let go. It will repeat this squeal over and over again like an alarm call. You may also think that it sounds like whining or whimpering.

In a way, that’s what squealing is. The rabbit is warning other nearby rabbits that there’s a predator around. It will continue to do so even if it means that the predator can find it if it gets away.

If you hear this noise, then leave your rabbit alone for a little while. Let it calm down until it’s comfortable being around you again. By continuing to pet or irritate it when it makes this noise, you’re teaching your rabbit that you’re a threat.

The only exception is if your rabbit is in intense pain. Some health conditions, like rabbit hemorrhagic disease, cause severe pain that may result in screaming. According to Veterinary Research, this disease was only first described in 1984 but has since become common.

Or, if somebody corners your rabbit, it may scream if it fears for its life. Sometimes a child or someone that isn’t familiar with rabbits can accidentally frighten your pet. But even when this happens, it’s unlikely that they’ll scream. Other distress noises are more likely at first.

Rabbit screaming is a very distressing noise to hear. It sounds similar to a child screaming. You can’t mistake it for any other kind of rabbit noise.

Like in other animals, there are many reasons why your rabbit may be having trouble breathing. Respiratory infection (like a cold) is the main cause. This usually clears up on its own, but if it doesn’t, will necessitate a vet’s visit.

If that’s the case, you may notice other symptoms, including nasal and ocular discharge, plus a lack of appetite.

Wheezing breathing can be caused by stress and a lowered immune system. Or, your rabbit may be overweight and their airways blocked by their excess fatty tissue.

Bear in mind that this is different to a sighing noise. A sigh is a noise that occurs once, usually in a positive scenario, where your rabbit is content. Wheezing is a continual noise that is accompanied by other signs of distress. You can easily tell the difference.

12) Do Rabbits Sneeze and Cough?

Sneezing is a common reaction among animals to a blocked airway. It is a reflex which shoots air through the nose in a bid to clear it. Coughing is the same, but for the throat.

According to Veterinary Microbiology, rabbits do sneeze when they have a respiratory infection. But like with people, the cause may be more benign. If there is any dust nearby, for example, then this can irritate the rabbit’s nose and cause it to sneeze.

The same applies to coughing. It can be a sign of a respiratory infection, but it is also possible that the cough was an isolated event and not a symptom of anything more. Not every time you cough is a sign that you have a cold, and in rabbits, it’s the same.

1 thought on “12 Noises Rabbits Make (and What They Mean)”