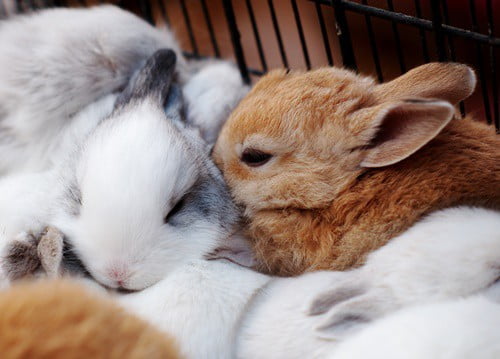 If your rabbit is making strange noises when breathing, you’re bound to be concerned about her wellness. Wheezing is particularly worrying because it suggests your rabbit is struggling to breathe.

If your rabbit is wheezing, mouth breathing, or tilting the head, then she’s struggling to breathe. Also, nostril-flaring is a sign of breathlessness. Breathing problems are caused by bacterial infections, stress, nutrient deficiencies, allergies, and more.

Wheezing and mouth breathing are a cause for concern. But clucking and purring in rabbits are not. We’ll tell you what is and isn’t normal when it comes to rabbit breathing noises.

Why Is My Rabbit Making Strange Breathing Sounds?

A respiratory disease should always be investigated because it is often life-threatening. Don’t confuse labored breathing with the sounds of normal breathing.

How Do Rabbits Normally Breathe?

According to Physiology, the smaller the animal, the faster she’ll breathe. So, first-time rabbit owners might be surprised to find that rabbits breathe much faster than cats and dogs.

As long as your rabbit’s respiration rate is between 30 and 60 breaths per minute, then this is considered normal. A normal resting heart rate for a rabbit (beats per minute) is around 220.

Similar to human infants, rabbits breathe exclusively through their nose. Rabbits can breathe through their mouth when their nose is blocked. But they cannot tolerate mouth breathing for long, so it is considered a medical emergency.

If you sit quietly, you will probably be able to hear your rabbit’s breath. This is normal, as long as you don’t hear wheezing.

Signs of Abnormal Breathing in Rabbits

Now we know what normal breathing is, here are the signs of abnormal rabbit breathing:

Respiratory infections are relatively common in rabbits. These infections can be caused by:

Rabbit infections are serious and often lead to death if they are not treated. Wheezing and noisy breathing are common symptoms of an infection, but there are other symptoms, too.

As mentioned, rabbit infections tend to cause wheezing and noisy breathing. To be more specific, the symptoms of bacterial infections are:

When rabbits have a bacterial infection, slow breathing is more common than tachypnoea.

Although rabbit snuffles might just look like a cold, they are much more serious than this. Bacterial infections should be diagnosed and treated as early as possible. Your vet will prescribe medication for your rabbit, and you will need to care for your rabbit at home until the infection has cleared up.

The most common treatment is antibiotics. It may be necessary to administer an antibacterial agent into your rabbit’s lungs using a nebulizer. Also, infections caused by mycoplasmas don’t usually respond to antibiotics, so additional drugs may be required. Once home, you’ll need to:

Along with bacterial infections, viral infections can also cause breathing difficulties in rabbits.

According to NCBI, viral infections are not very common in rabbits, especially in the U.S. However, in Europe and Australia, rabbits are susceptible to a viral disease called myxomatosis.

This virus was introduced to these countries to help control feral rabbit populations. It causes death in around 95% of cases, so it certainly should be avoided. According to PDSA, symptoms of myxomatosis include:

Breathing problems are often one of the first signs of myxomatosis.

In the UK, there is a myxomatosis vaccination for rabbits, so you should strongly consider this if your rabbit has not already received it. This vaccine isn’t available in Australia.

So, if you live in this country, you should take extra precautions to protect your rabbit. Rabbit owners in the U.S. may also take these precautions, but the risk of infection is much lower in the U.S.

So, how can you prevent myxomatosis? Well, this virus is usually spread through insect bites, so:

Also, make sure your pet rabbit doesn’t have any contact with wild rabbits. Unfortunately, this viral infection has an extremely low survival rate, so prevention is key.

Fungal diseases in rabbits are rare, but they can sometimes arise. One such fungal disease which can affect breathing is Aspergillosis. This is an overgrowth of Aspergillus fungus – usually in the rabbit’s nasal passage.

Very young, old or chronically ill rabbits are most susceptible to this condition as they have a weaker immune system. Symptoms include:

The Aspergillus fungus grows on decaying vegetation so remove any uneaten veg from your rabbit’s cage at the end of each day.

If your rabbit is coughing, spluttering of gasping for air, this may be caused by a blockage. Items that can cause obstructions include:

Another symptom of a blockage is nasal discharge (coming from both nostrils). Blockages should be investigated by a vet immediately.

Stress can alter a rabbit’s breathing. And if the stress is chronic, this can cause severe breathing difficulties. Here are some symptoms of stress-related breathing problems in rabbits:

Prolonged periods of stress can also cause respiratory infections. This is because the stress weakens the rabbit’s immune system, and this leaves them susceptible to pathogens.

What Causes Stress in Rabbits?

Rabbits are extremely sensitive creatures, so seemingly minor things can cause intense stress. To give you an idea, the following can cause stress and anxiety in rabbits:

These things can lead to stress and breathing difficulties.

How to Prevent Stress in Rabbits

Most of us assume that because we love and care for our bunny, they must be free from stress. But this is not always the case. Even if you put a lot of effort into caring for your rabbit, there may be some room for improvement.

To be calm and contented, rabbits must have the following:

Allergies or irritants can also cause breathing problems in rabbits. Allergies are quite rare in rabbits, especially compared to cats and dogs. But there are lots of potential irritants. These include:

Allergens and irritants can cause coughing, sneezing, lethargy, rapid or slow breathing, and runny eyes and nose.

In some cases, there might be rapid or open-mouth breathing, but this is not always the case.

Causes of Cardiac Disease in Rabbits

At this time, we do not fully understand the causes of cardiac disease. Specialists believe that the following factors may be involved:

So, feeding your rabbit the correct diet, and keeping the cage clean may help to prevent cardiac disease. In any case, it will undoubtedly help to keep your rabbit healthy.

Is Snoring Normal in Rabbits?

Snoring can be a symptom of any of the conditions we’ve mentioned so far, such as infections, stress, and allergies. Tumors, hypothyroidism, and abscesses can also trigger snoring.

Also, it’s thought that some rabbits suffer from obstructive sleep apnea (OSA). A rabbit with OSA will actually stop breathing at points during the night, so it’s a severe condition.

So, rabbit snoring should always be investigated. It might not turn about to be anything serious, but it’s better to be on the safe side.

Although strange noises can be a cause for concern, it’s important to say that some rabbit noises are normal. Rabbits don’t meow or woof, but they do communicate through sound.

In fact, it is these subtle sounds which make rabbits so endearing. With that said, the following rabbit noises are probably not a cause for concern:

In some cases, you’ll need to use the context of the situation to understand your rabbit’s noises. Grunting is understandable if there is something to grunt about. But continual grunting for no apparent reason indicates respiratory disease.

Respiratory disease is very serious in rabbits, so get it checked out. Many different factors can cause it, so you’ll need the help of a vet for an accurate diagnosis.

1 thought on “Why Is My Rabbit Making Noise When Breathing?”