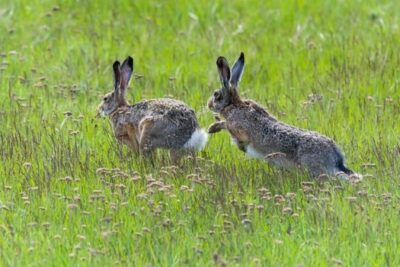 It can be hard to understand your bunny’s body language. One social behavior that is common in rabbits is circling. This is where a rabbit runs in circles, usually around another rabbit or your feet.

Circling is usually a form of courtship behavior, indicating that your rabbit wants to mate. It may be accompanied by honking noises. In neutered rabbits, circling can be a way of establishing dominance. Rabbits can also circle when they want attention, are bored, or are initiating play.

We’ll explore the reasons why your rabbit is running in circles, and how to stop this behavior. You’ll also find out the difference between circling and spinning, which can be a sign of a medical problem.

What It Means When a Rabbit Runs in Circles

Running in circles (circling) is a common behavior in domestic rabbits. You may see your rabbit circling around your feet, another rabbit, or other pets. Here are the reasons why rabbits run in circles:

Let’s now take a look at each scenario in which your rabbit might demonstrate circling behavior.

Why Is My Rabbit Circling and Honking?

Courtship is the main reason why rabbits circle one another. They are indicating their readiness to mate. If this is the case, the circling will often be accompanied by soft honking or oinking noises.

If your male rabbit is trying to court a female rabbit, you’ll also notice him mounting her. If she’s receptive, she will raise her hindquarters and allow him to mate. She’ll have a litter of bunnies in a month’s time, presuming she’s not spayed.

Some particularly hormonal rabbits can also confuse other animals – including humans – for a viable mate. This often happens in male rabbits if there are no females around. If you’ve ever wondered “why is my rabbit running in circles around me and grunting?” this may be why.

This behavior is almost always seen in unneutered males. It’s a result of reproductive hormones gone wild. You may also notice your bunny becoming territorial over their space, and even showing some aggression.

Most of the time, having your rabbit fixed will resolve most courtship behaviors.

Why Is My Neutered Rabbit Circling?

Neutered rabbits can also circle one another, and display other courtship behaviors. It’s not as common, but it can happen.

It’s most likely to happen within two months of the operation. This is because it may take several weeks for reproductive hormones to leave your rabbit’s system altogether.

All rabbits are individual, and respond to the neutering operation in different ways. Some rabbits display courtship and territorial behaviors forever, even once they’re fixed.

Neutered rabbit circling behavior is most common if the rabbit got fixed later than a year of age. At this point, it becomes a habit that’s hard to break, even when their hormones are in check.

Fortunately, these behaviors won’t cause any harm to come to you or your rabbit. At most, they may be a little annoying to deal with.

Why Are My Rabbits Circling Each Other?

If you have ever introduced two rabbits to one another, you may have noticed some circling behavior. Rabbits often circle each other as a show of dominance. They’re trying to figure out which rabbit is the top bunny.

You’ll usually see a rabbit circling another rabbit when they have not yet established a bond. The more dominant rabbit will begin the circling, while the passive rabbit sits still in the center. If both rabbits are equally dominant, they may chase each other’s tails.

In courtship behavior, it’s always the male circling the female. If they’re circling for dominance, two male rabbits circling each other is a normal sight.

Female rabbits also circle one another. Female rabbits can be fiercely territorial around other females. They usually get on better with males.

If your rabbits are circling each other, this doesn’t always mean they aren’t getting along. It just means they’re trying to figure out their relationship.

It may take several weeks of slow introductions before your rabbits stop circling one another. Even rabbits in bonded friendships can circle every now and then, just to remind the other who’s boss.

Rarely, circling can turn into fighting. This usually happens if both rabbits are equally dominant and try to circle each other simultaneously. If the circling gets faster, like a rabbit whirlwind, separate your bunnies.

Why Is My Rabbit Circling Around My Feet?

Rabbits don’t always circle other rabbits. They enjoy circling humans too, though for slightly different reasons.

It’s quite common for rabbits to circle their owner’s feet, particularly while they’re standing up. Not all bunnies do this, though most will at some point. A rabbit circling feet is a clear sign that they want attention.

If you see your pet rabbit circling your feet, it may be doing one of the following.

Generally, your rabbit circling you is a good thing. It means they love you and want your attention, or are just happy to see you.

Why Is My Rabbit Running in Circles in Cage?

Most of the time, circling is a social behavior in rabbits. They are trying to communicate something to the rabbit or human that they are interacting with.

Rabbits shouldn’t be kept in small cages. They should be allowed 32 square feet of space to exercise in, for a minimum of three hours per day.

Ideally, they should be allowed to free-roam in a rabbit-proofed room. If you must use a cage, it should be at least 12 feet in area.

Why is My Rabbit Spinning in Circles?

Running in circles isn’t often a bad sign in rabbits. It’s usually a social behavior, or at worst, a compulsive behavior triggered by boredom.

However, spinning on the spot is a different thing altogether. A rabbit spinning in circles could be a sign of a medical problem.

Rabbits can develop a condition called head tilt. It is usually caused by an ear infection, parasite, poisoning, head trauma or stroke. According to research in Neurology, it can even be a sign of an imbalance of chemicals in the brain.

Spinning in circles is one potential symptom of head tilt. Watch out for these other red flags:

If you’ve spotted these symptoms, take your rabbit to a veterinarian. It’s better to be safe than sorry, as rabbits with head tilt can die if left untreated.  Ensure that you choose a veterinarian who is experienced with rabbits.

2 thoughts on “Why Is My Rabbit Running in Circles?”