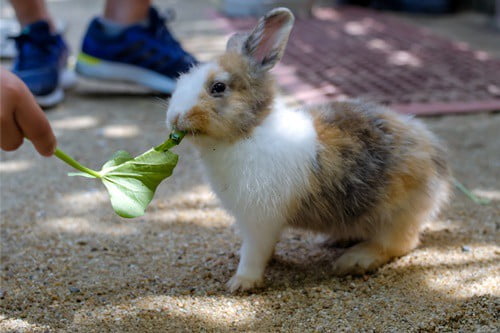 Leafy green vegetables are the cornerstone of a rabbit’s diet. In addition to hay, leafy greens aid your pet’s digestive process. This strongly suggests that spinach will improve your rabbit’s health.

Spinach is good for rabbits in small amounts. It’s high in fiber and rich in vitamins (A, B9, and K1) and minerals (iron, magnesium, and calcium.) But it should only be fed up to twice a week, and it must be raw. Spinach contains oxalates, which can irritate a rabbit’s stomach.

Spinach is considered to be a superfood, and it’s packed with beneficial vitamins and minerals. As with any new food, introduce spinach to your rabbit steadily and look out for any adverse reactions. If your rabbit enjoys spinach, you can make it a controlled but regular addition to her diet.

Is Spinach Safe for Rabbits to Eat?

Spinach is a leafy green vegetable, originally hailing from Persia. Spinach comes from the same plant family as beets and chard. There are four primary types of spinach:

Health Benefits of Spinach for Rabbits

Spinach is good for rabbits if it’s fed to them in moderation. This vegetable provides many health benefits. Spinach is packed with fiber. This means that it’s great for a rabbit’s digestive system. Rabbits need fiber more than any other nutrient.

What’s more, spinach contains insoluble fiber. This means that it bulks up and solidifies the stool. A rabbit will benefit from this, as it means she’ll produce regular and healthy poops. There are other health advantages to spinach, too. The vegetable is high in the following:

Spinach should be offered as a treat. Ideally, spinach should be fed to your rabbit two or three times per week. This will be often enough to gain the benefits, but not risk overexposure.

Do not eliminate spinach from your rabbit’s diet entirely because there is a range of health benefits to spinach. The good it does more than outweighs the bad.

What if My Rabbits Overeats Spinach?

The main problem with spinach is oxalic acid. Oxalates are a form of toxin. Common symptoms of excessive oxalates in rabbits include itchiness around the mouth, and difficulty urinating. It’s also possible for a rabbit to have too many vitamins.

Spinach also contains a large amount of Vitamin C. Rabbits do not need this vitamin, as they produce it organically. If a rabbit gets too much Vitamin C, she’s at risk of kidney damage.

Spinach must be fresh and raw. Never feed a rabbit cooked or frozen spinach. Rabbit stomachs cannot digest cooked food. When vegetables are cooked, the fiber content is lost.

If you grow your own spinach, you’ll know that it’s rabbit-safe. Don’t add any chemicals to your yard or vegetable patch. A rabbit cannot vomit if she consumes a poisonous substance.

How to Feed Rabbits Spinach

Spinach should be an occasional snack. You will also need to be careful about what you pair the vegetable with. Any foodstuff from the same family will magnify the presence of oxalates.

When preparing fresh vegetables for your rabbit, avoid the following if you are feeding her spinach. You are looking at an either/or situation to prevent health complications.

You are not restricted in what you can feed your rabbit. Any of the following vegetables pair well with spinach.

You should also wash the spinach thoroughly before feeding it to your rabbit. This will eliminate any trace of pesticides or herbicides. If you do not grow your own spinach, purchase organic produce.

Leaves are what we picture when we think of spinach. Your rabbit will enjoy eating them. Baby spinach leaves will be particularly tasty. These are sweeter, which appeals to a rabbit’s palate.

Baby spinach is smaller in size, too. This is a good thing for your rabbit. It leads to a reduced risk of excessive spinach consumption. In addition, rabbits have small mouths.

There is nothing wrong with feeding adult spinach leaves in moderation. Be slightly careful of savoy spinach leaves, though. The curly nature of this vegetable means it can get trapped in a rabbit’s throat, so there’s a risk of choking.

These are the best parts of spinach for your rabbit. Even better than the leaves. If you only offer one element of spinach to your rabbit, make it the stalk or stem.

The main reason for this is the fiber content. The stalk or stem of spinach contains more fiber than the leaves. This means that, while your rabbit is eating, she is also improving her health.

The stalk and stem is the most fun part for your rabbit to eat. Rabbits love to chew. Leaves will be consumed and torn apart quickly. Stalks and stems require a little more effort to chew through.

If serving your rabbit spinach, never cut off the stalk and stems of the vegetable. Doing so is extracting the majority of the goodness.

If you grow your own spinach, you will also have access to the root. It’s probably best not to allow your rabbit to eat this. A rabbit will enjoy the challenge, but this part of the vegetable is high in sugar. This can counteract the health benefits found in spinach.

One of the benefits of spinach is that it’s calorie-neutral. That’s due to the high water content. If your rabbit eats a sugary part of the spinach, she’s undoing all of the goodness.

Do Rabbits Eat Spinach in the Garden?

If you grow spinach in your garden, you’ll likely find that your rabbit discovers it. Rabbits are natural grazers. Your pet will not think twice about eating your spinach once she has tracked it down.

Wild spinach will invariably be raw, which removes the risks associated with cooking it. You will also know what your rabbit is eating. There are risks involved with your rabbit eating wild spinach:

Prevent your rabbit from gaining access to your wild spinach. It’s safer to trim and serve it yourself. To restrict access to your garden spinach, try the following techniques:

It will prevent wild rabbits from gaining access to your spinach. Word quickly gets around a rabbit colony when a yard has a tasty food supply. You could find yourself overrun by wild rabbits.

Are Rabbits Allergic to Spinach?

It’s possible for a rabbit to be allergic to spinach. When introducing spinach to your rabbit, do so in small doses. This is advisable anyway. Too much new food at once can upset a rabbit’s digestion. You also need to look out for warning signs of allergy. These include:

If your rabbit does not like spinach, or you’re reluctant to feed it, there are alternatives. This is the good thing about rabbits following a strict herbivore diet. Most favored snacks are healthy.

Try foods from the same family. This is the same list of vegetables that we previously said cannot be fed alongside spinach. If you are offering these vegetables instead, they’re perfectly safe.

Beyond these foods, kale is often considered to be the best alternative to spinach. Kale will need to be fed in moderation, just like spinach. The vegetable is high in calcium, and too much will damage your pet’s kidneys.

The good news is that kale is much lower in oxalates, according to the US Department of Agriculture. Kale contains 0.02g of oxalic acid per 100g of leaves. Spinach contains 0.97.

Spinach is a superfood for rabbits. Around twice a week, fresh, raw spinach is an ideal treat. Your pet will enjoy the taste, and she’ll gain plenty of goodness from it.