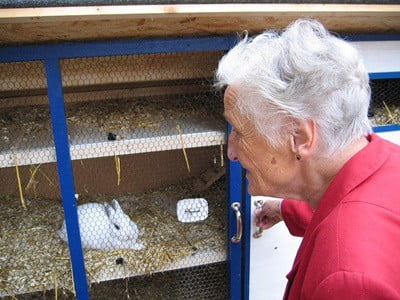 Owners want to find ways to communicate with rabbits. Thankfully, rabbits are intelligent animals that have proven to be smart enough to be trained. While rabbits cannot understand human language, they can be trained to understand what we say through gestures and verbal cues.

Just as our rabbits can be taught to understand humans, rabbits also have their own language. Biting, thumping, and digging are some behaviors that can confuse owners. However, each behavior has its own meaning. So, understanding these behaviors can help you understand your rabbit better.

Can Rabbits Understand You?

There is ample evidence to suggest that rabbits can understand people. Owners have successfully trained rabbits for decades. This shows that, to an extent, rabbits are able to understand human communication.

Of course, your rabbit won’t be holding a conversation with you. However, rabbits do have the ability to recognize, and to respond to, human speech.

Can Rabbits Recognize Your Voice?

For rabbits to understand words, they have to learn how to recognize their owner’s voice. Most owners attest that their rabbits can recognize voices.

Not only can rabbits recognize voices, but smells and faces. Owners have reported rabbits coming closer to their owners. Conversely, rabbits tend to be neutral towards strangers, and sometimes even fearful.

However, owners should be careful when speaking to a rabbit. Rabbits have a different hearing range from humans. Cottontail rabbits, for example, can hear sounds from 30 Hz to 32 kHz, according to the Journal of Comparative Physiology.

Humans, on the other hand, have a hearing range of 20 Hz to 20 kHz. When speaking to rabbits, speak in a calm and gentle voice. Doing this will avoid stress and anxiety in a rabbit.

Since rabbits can be trained, that also means that rabbits can learn words. Rabbits have the ability to learn many commands through training.

Of course, it will take some time to teach your rabbit these commands. On top of that, some rabbits will be slower learners than others. However, with enough perseverance, rabbits can learn words and how to respond to them.

While there is a lack of formal study in the field, there is good evidence to suggest that rabbits can learn sign language.

Training rabbits include a lot of cues that are not necessarily vocal. For example, to train a rabbit for a high five, the cue would be a hand in front of their face. Similarly, to train a rabbit to open a box, you probably will need to open the box yourself.

Hand signals, of course, are far from actual sign language. As a language, sign has its own grammar, syntax, and vocabulary. However, it is reasonable to expect your rabbit to learn a very basic form of it.

Have you ever needed to give your bun a trim, only for them to hide and avoid you? Or have you ever tried to stop your rabbit from chewing a wire? Have you ever noticed your rabbit dashing out before you could say a word, just so that they can come back to chewing when you leave?

How does this happen? Note that we train animals by pairing an action with a response. However, our actions are also accompanied by their own body language. Repeat the action enough, and we are unconsciously training our rabbit to understand what comes next just by our posture, walk, or facial expression.

All of these are due to the nature of rabbits as prey animals, and anxiety is a hard-wired response. These can be trained out of a rabbit in the same way rabbits can be taught tricks.

How Do Rabbits Learn Words?

The ability of rabbits to learn words can be attributed to a theory called classical conditioning. You may have heard of this theory before, commonly applied to dogs. If you ring a bell and feed a dog afterwards enough times, the dog will associate the bell with food. Then, the dog will expect food whenever the bell is rung.

How To Train Your Rabbit

Rabbits can recognize your voice, and can be classically conditioned. But how exactly do you train a rabbit? The main principles of rabbit training, as well as any animal training, can be broken down into three steps.

A command can either be vocal or physical, either a word or a gesture. Trainers often pair both. Commands should be clear, concise, consistent, and easy to remember. For example, clapping, making a circle with your finger, or tapping a surface, are good commands.

Things To Teach Your Rabbit

What do these principles look like? Here are some tricks that put these three principles in action.

Sitting up is a simple trick that can be easily taught. It is also fairly impressive. Here are the steps to teach your rabbit how to sit up:

Jumping is one of the most common tricks that are taught to rabbits. In fact, rabbit show jumping competitions have been regularly held in the U.S. and Europe. To teach your rabbit to jump, do the following:

Obstacle courses are filled with objects that rabbits can jump above or on to. They don’t have to be big or complicated. Just stack a few boxes on top of each other, or small objects to jump on.

Those starting out with rabbit training can start with just one box. Build up your obstacle slowly as your rabbit learns. Just be sure to cut off all sticky or sharp parts of the objects you choose. Ensure that your obstacle course is clean and safe.

Place The Treat on The Surface

Say your rabbit’s name and give the command. “Hop,” is a good command to pick. You can also pat the surface with your hand.

Repeat Without The Treat

When your rabbit gets the hang of the first object, move on to another one. This time, your rabbit should associate the command with the object, and jump despite the change. Reward it with a treat after every successful jump.

How do we listen? Rabbits have a language all on their own. Figuring out what their body language and vocalizations mean can let us understand our rabbits better. Here are some of the things rabbits do to communicate, and what they mean:

What does it mean when a rabbit digs? Rabbits naturally dig in the wild for nesting and hiding. As pets, rabbits dig for fun. Sometimes however, rabbits dig in places we don’t want them to. To avoid this, limit your rabbits to spaces where they are allowed to dig.

Your rabbit will also sometimes dig on your hands, feet, or clothes for attention. If this happens, don’t worry. Digging is a natural behavior. Just give your rabbit a well-deserved cuddle.

Rabbits will often give a nip to ask for attention. These are usually small, harmless bites, and will often not break the skin. Actual bites, however, are something different.

Rabbits naturally form hierarchies, as shown in a study in Applied Animal Behavior Science. To establish hierarchies, rabbits turn to biting. Rabbits often growl before this happens. If you notice growling, separate the rabbits before a fight breaks out.

Alternatively, rabbits will bite if they are uncomfortable. Picking up a rabbit the wrong way or petting them too hard can cause a rabbit to bite. If this happens, stop and give your rabbit space.

Thumping is often a sign of upset. If a rabbit feels ignored, hungry, or thirsty. Other than being mad, rabbits can thump when they feel threatened or in danger. When a rabbit thumps, leave it alone to calm down. Try to remove any harmful and stressful objects nearby.

Sometimes called purring, rabbits will grind their teeth against each other to signal contentment. However, teeth grinding can also signal pain. To determine which is which, look at a rabbit’s body language.

If a rabbit is sitting up, hunched, and immobile, that means that it is anxious or even in pain. On the other hand, if a rabbit has a relaxed posture, then there is nothing to worry about.

Rabbits will rub their face against objects to mark their territory. A rabbit’s face has scent glands and rubbing these glands against an object releases a scent. This signals to other rabbits nearby that an object belongs to them. Even if there are no rabbits nearby, rabbits will chin out of instinct.

While rabbits have the ability to learn words and recognize voices, that does not mean they can understand human language. Rabbits are intelligent creatures, but they speak a language all on their own.

While it may seem like it, rabbits don’t really learn the meanings of words and gestures. What they learn instead is how to respond to them. After all, classical conditioning is nothing more than just associating a stimulus with another. While this is still a fairly impressive feat, rabbits still have a ways to go if they want to start understanding human language itself.

On the other hand, this doesn’t mean that you can make it look like your rabbit understands you. Some rabbits are definitely smarter than others. Any lack of intelligence can be made up for in hard work and perseverance.