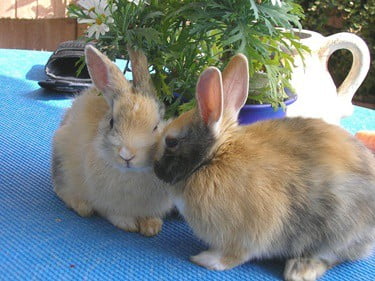 Mounting in rabbits is either a sign that it wants to reproduce, or it is communicating. It is normal for rabbits, neutered and not, to mount and hump other rabbits. There is a point where mounting should be stopped, though, as it may lead to fights.

Rabbits mount other rabbits to communicate. Largely, this communication is centered on rabbits determining a social hierarchy. Rabbits are extremely social and rely on establishing this hierarchy. A dominant rabbit will mount subordinate rabbits to initially place itself as the boss and occasionally after this to affirm its place. Mounting may also signal that your rabbit is reaching sexual maturity.

Mounting is a normal behavior in rabbits. However, it is important to note the frequency with which a rabbit does mount. It is also key to check how the rabbit being mounted responds. Any vocalizations, biting, kicking, or fleeing are signs that the rabbit is not willing to be subordinate. The rabbits should be separated to prevent any fighting from occurring.

What Does Rabbit Mounting Mean?

Mounting in rabbits is either a breeding response or rabbits communicating. As strange as it may seem, this behavior is entirely natural.

Rabbit mounting means that it is attempting to breed, which is an instinct that can appear even if it is neutered. Spring often triggers hormones, even in animals that cannot breed, which leads to behaviors related to reproduction. Mounting is also courting behavior. Meaning one rabbit shows its interest in bonding or mating through mounting, and the other showing if it reciprocates these feelings by allowing it.

Mounting also means that the rabbit is performing one of the many complex behaviors rabbits use to establish and reinforce social structure. This may be spurred by the rabbit feeling territorial, or the need to establish a hierarchy with other rabbits. It is very common for mounting to occur between rabbits that are unfamiliar with one and other.

For these reasons, keep an eye out for mounting. Depending on the scenario and frequency, fights between the rabbits may ensue.

Why Do Rabbits Hump Each Other?

Rabbits are social, and also have very strict hierarchies. There are many behaviors that rabbits will exhibit while establishing such hierarchies, including chinning, chasing, licking, circling, humping, and grooming.

Should there be two rabbits battling for dominance, they may also bite, kick, and fight. Once a hierarchy has been established, the dominant rabbit may continue to assert itself through a variety of actions.

Rabbits do not have a set breeding season. Males and females can breed throughout the year, which is part of why rabbit populations can quickly bloom out of control. An instance of which CSIRO Wildlife Research notes; dominant females, in a wild colony, had multiple litters of kits in a single year. This ability to breed persistently means that mounting as a mating behavior can also occur throughout the year.

Spring does, however, typically trigger mating instincts. Or, at least, make them far stronger. Spring is when rabbits, females, and males, have surges of estrogen and testosterone within their respective systems. These hormonal spikes result in excessive reproductive behavior, like humping. This may be between males and females, or it may be between same-sex pairs reaffirming social hierarchies before mating begins. In the wild, dominant pairs breed before the other members of the colony.

Spring is the ideal time for rabbits to reproduce. There is an abundance of food and the weather is stable and mild, offering rabbit kits a higher chance of survival. Domestic rabbits will retain this instinct to breed during spring, even if neutered. You may notice your rabbits mounting more frequently for a few weeks during spring for this reason.

A rabbit may also mount another if it has other scents upon it and it wishes to re-mark its territory. This could happen if the rabbits are moved to a new enclosure or home, or if one of the rabbits was gone for a period of time.

During mounting acts, some rabbits may also bite. This biting is usually a nip, nothing more than a pinch, and is another form of communication between rabbits. Usually, the rabbit attempting to establish itself as the dominant, or alpha, rabbit will be the one to nip.

True bites arise when the rabbit being mounted also wants to be the dominant rabbit. It may warn the other rabbit off with a nip, which may evolve into a harsher bite if ignored. Bites may result in injuries or fur being pulled out. Should this behavior continue, a fight may unfold.

In the case of anything beyond a gentle nip, which is also a common grooming tactic, it is important to separate the rabbits. Not all rabbits will get along, and each may need to be housed separately for their own health and safety.

Why Do Female Rabbits Hump Each Other?

If one of your female rabbits is humping another doe, it is resolving issues over territory or social dominance.

Why Do Two Male Rabbits Hump Each Other?

Male rabbits hump each other for the same reasons that female rabbits do: to show dominance. There is a slight chance that this behavior could inspire more aggressive nipping if one of the rabbits does not cede to becoming subordinate to the other.

What Is Backwards Mounting In Rabbits?

Backwards mounting is when the rabbit mounts the other from in front instead of behind. This is a form of communication and the rabbit showing dominance.

Why Do Rabbits Hump Each Other’s Heads?

Some suggest that backwards mounting is a way of rabbits communicating certain things. Such as a desire to play, a willingness to breed or bond, or a dominant rabbit reaffirming the other’s place in the hierarchy. Odd as it may seem, it can be a sign of affection too, or so some believe.

It might also be fair to assume that a rabbit flooded with hormones could be so mentally addled that it may mount its mate incorrectly.

Neutering rabbits stops a lot of undesirable and destructive behaviors. The Journal of Exotic Pet Medicine notes that these behaviors include:

Mounting, as a behavior, is not destructive. It is, in fact, an important method of communication between rabbits. For this reason, neutered male rabbits will still mount on occasion. The need a rabbit might feel to assert dominance may also be dampened by neutering.

Excessive mounting is not destructive to property, but it can be an annoyance – especially to the rabbit being mounted. Keep a close eye for any negative reactions, including vocalizations, escaping, or biting.

Neutered rabbits will usually only mount, for reproductive purposes, during the spring or early summer months. This is an instinctive time of year for many animals. The change of season triggers sexual behavior, including mounting. Neutering a rabbit may not be enough to quell this instinct.

Ideally, a rabbit should be neutered before it is 6 months old. Rabbits that are neutered older may have already learned mounting behavior, and thus may continue to do so post-neutering.

Should You Stop Rabbits from Mounting?

A distinction must be made here between normal mounting and excessive mounting. Normally, mounting is an important aspect of communication. Hierarchy is incredibly important in rabbits’ social structure. While there are other behaviors that allow rabbits to organize these structures, mounting is a non-violent avenue compared to biting, fighting, and chasing.

Introducing a new rabbit to your household may see a surge in mounting behavior for this purpose. Even once the alpha rabbit has been determined, mounting and other dominance signs may continue for days or weeks afterwards. You may also see these behaviors return if one rabbit is gone for a period of time, such as for a visit to the vet.

Mounting becomes a problem if both rabbits are grappling for dominance. This is when mounting behavior may include biting and fur pulling, possibly resulting in injuries. Even worse, a fight. If a rabbit rejects being mounted and the mounter chases it, this is a bad sign. Rabbits are more than capable of severely hurting each other in a brawl.

It is important to separate rabbits that show any aggression in relation to mounting. Show both rabbits equal affection, and don’t punish them for their unruly behavior. This won’t do any good, and may damage your relationships with the rabbits. Allow the rabbits more time to adjust to each other’s presence, perhaps by using an enclosure that keeps them apart but able to see and smell each other.

Of course, if the reasons for mounting are due to the rabbit reaching sexual maturity, it is another matter. Mounting is a sign that the rabbit is able to reproduce. Or is not far off it. In the event that you have more than one rabbit, and it is of the opposite sex, separate them. You don’t want a surprise litter! After that, speak with your vet about having the rabbit neutered.

The only way that mounting would pose a danger would be if the rabbit being mounted has an injury or illness. Any respiratory illness or heart condition may be worsened by the weight of the other rabbit. Injuries may also be aggravated. A rabbit will squeal if it is distressed or in pain.

Should your rabbit be sick or injured, house it separately. Or supervise all interactions with other rabbits so that you can prevent any mounting behavior from occurring.

Mounting behavior in rabbits isn’t just an act for reproduction. It is a means of communication. Largely, for communicating social structure. Rabbits are very social, and have strict hierarchies that relegate one rabbit as the dominant (usually a female) and the rest as subordinate.

A dominant rabbit will use mounting, alongside other acts, to enforce its place as the alpha. Mounting can happen between male rabbits, female rabbits, and male-female pairs. Neutered rabbits may still practice mounting. Either for communication, or in response to spring and early summer triggering hormonal spikes.

1 thought on “What Is Mounting Behavior in Rabbits?”