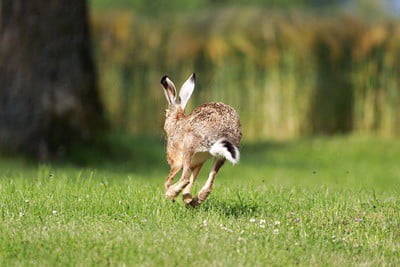 Rabbits use their speed to outmaneuver attempts at capture. In the wild, rabbits can flee from deadly predators and dodge ambushes of every kind.

Wild rabbits have an average speed of 35 to 45 mph. Domestic rabbits are slightly slower than their wild counterparts, lacking the practice in fight-or-flight. They clock in at speeds of 30 to 35 mph. Rabbits are sprinters, unable to maintain these speeds for very long.

Domestic rabbits may not be the fastest lagomorph, but they still have impressive bursts of speed and power. You can even measure your own rabbit’s pace to see if it is faster or slower than average.

Contents show
How Fast Do Rabbits Run?
How Do Rabbits Move?
How Do Rabbits Run So Fast?
Top Speeds of Rabbit Breeds
How Long Can A Rabbit Run At Top Speed?
Rabbit Speed Vs. Other Animals
How To Measure a Rabbit’s Speed
Stopwatch Method
Video Method
Related Articles:

How Fast Do Rabbits Run?

The average rabbit can run at about 25 to 45 miles per hour. That’s quicker than the fastest human in the world, Usain Bolt, who holds the record at 27 miles per hour. On top of being fast, rabbits can also accelerate very quickly and make turns without losing momentum.

Wild rabbits are much faster than domestic rabbits. This is because they have the constant threat of natural predators. Domestic rabbits won’t develop the muscle tone or practice needed to reach higher speeds. Forcing a house rabbit to run at fast speeds may be detrimental to its health.

How Do Rabbits Move?

Rabbits hop, not run. This hopping motion is done by pushing both feet off the ground at the same time, lifting the rabbit forward. A rabbit will land on its front paws, one after the other, generating momentum. This is similar to the way other speedy animals move, like cheetahs.

How Do Rabbits Run So Fast?

Rabbit bodies are designed to be fast. This is most obvious in the design of their legs. A rabbit’s hind legs are longer than its front legs.

As a rule of thumb, the longer a rabbit’s hind legs are, the faster it will be. Hares are a good example. Hares have larger feet than rabbits and, on average, are much faster.

Fast-twitch fibers are made for speed and acceleration. You’ll need these sprints. Slow-twitch muscle fibers, on the other hand, are for endurance and stamina. You rely on these for marathons.

The strength of a rabbit’s muscles is impressive. In fact, a rabbit’s muscles are stronger than a cheetah’s, the fastest animal on land. According to the Journal of Experimental Biology, a cheetah’s muscle fibers can generate a force of 92.5 W/kg. Rabbits, on the other hand, can generate a force of about 120 W/kg. This gives them the ability to make powerful hops that can reach up to 10 feet in distance.

Aside from being fast, rabbits also have a short acceleration time. This means they’re not only built to be fast, but can reach their top speeds in very little time.

In practice, this means they can not only outrun their predators. They can also escape the predators’ reach and be out of sight in seconds – or less. That’s a significant advantage against animals that are similarly fast but slow to accelerate.

A rabbit’s size doesn’t help with speed, but it does help with agility. That small size makes a rabbit much harder to get a hold of or capture. In the wild, its size also makes it impressively skilled at hiding, tucking into burrows or hedges that predators can’t reach.

A rabbit’s size means it’s less heavy. With a reduced weight, the rabbit can burn less energy and its muscles don’t need to be as powerful to propel the creature. The result is that less time is needed to accelerate.

One iconic rabbit behavior is binkying, when a rabbit jumps in the air and do twists and turns. Binkying is a sign of happiness, but it’s also a prime example of a rabbit’s ability to turn while in motion. A rabbit is well-built to make sharp turns without losing much momentum.

In fact, rabbits in the wild will run in zig-zag motions when chased by predators. This allows them to shake predators without having to run for long bouts of time.

Because of this, rabbits don’t often reach their full speed. They’re difficult to catch even when they’re not running at 45 mph.

Some rabbits are faster than others. A rabbit’s speed can depend heavily on their breed. Here are the average speeds of the most popular rabbit breeds.

Named for their large, furry feet, snowshoe rabbits can be found in Northern American mountain ranges. They are known for having a snow-white winter coat, which turns brown in the spring.

As the name suggests, the snowshoe rabbit is built to be fast in the snow. Its large hind feet are shaped like a snowboard, allowing it to stay atop many layers of snow. Nimble and quick, snowshoes are also great at hiding in the brushy undergrowth of the forests they call home. Compared to other rabbits, they aren’t the fastest.

These rabbits need to spread their weight evenly across the snow, to prevent sinking. They can’t fully capitalize on digitigrade locomotion. Nonetheless, the snowshoe can reach speeds of 27 mph. When compared to other rabbit breeds, that’s considered one of the slowest averages.

Cottontail rabbits are a common breed. In total, there are about 20 different species under that name. The cottontail is built to evade predators – a fact that’s apparent in its size and speed. The cottontail is small, and its top speeds can reach up to 30 mph.

However, most cottontails only reach a speed of 18 mph. This is because they run in a zig-zag motion in order to avoid predators. While that’s a great survival tactic in the wild, it’s not the best way to gain momentum.

Also known as jack rabbits, hares are commonly praised as the fastest species of rabbit. While hares are technically not rabbits, they are closely related. In comparison to their smaller cousins, hares are much bigger, with large ears and impressively strong hind legs. While their large size does hinder their speed, their massive legs help to compensate.

A jack rabbit’s top speed has been recorded at 45 mph. However, it’s not only the fastest rabbit – it’s good at jumping too. Jackrabbits can leap to heights of up to 10 feet in one single jump, which is only 4 feet less than the average height of a building floor.

Even with all these advantages, jack rabbits still share their cousin’s weakness. They only have a small reserve of energy. They are great at sprints, but fail to maintain speed for long periods.

The European rabbit is native to Europe and Africa, but has been introduced to many other parts of the world. It is known to be an invasive species, negatively affecting the biodiversity of various locations. On top of its agility, its natural predators are also on the decline, worsening its impact as an invasive species.

The European rabbit is considered one of the fastest rabbit species in the world. With top speeds of 45 mph, it is as swift as a jack rabbit. However, it tends to be smaller and lighter, giving it more agility.

Despite their speed and lack of predators, the number of European rabbits around the world is on the decline. Currently, they are listed as an endangered species. This is due to a loss of habitat, diseases, and overhunting.

The domestic rabbit comes from a line of wild European rabbits. This species has been found in homes and raised from as far back as the 19th century. Within this common strand of genetics, there are many different breeds of domestic rabbits. However, most of them are bigger than cottontails.

The domestic rabbit can reach speeds of up to 35 mph. However, because of its domesticated nature, it often fails to reach these speeds. Instead, most domesticated rabbits are content with lounging around in their cages, only active during playtime.

How Long Can A Rabbit Run At Top Speed?

A rabbit cannot run at top speed for very long. As a creature built for sprinting, it boasts of an impressive acceleration time and agile movements. However, this comes at the cost of durability.

Remember that a rabbit has a high proportion of fast-twitch muscle fibers. This leaves little room for slow-twitch fibers, the kind necessary for endurance and stamina. Additionally, the glycolytic nature of rabbits’ fast-twitch fibers means they burn through energy quickly. A rabbit can run fast, but not for very long.

However, rabbits make up for this weakness in hiding. Aside from outrunning their predators, rabbits leverage good camouflage, a small body, and a talent for holding perfectly still to hide in foliage.

Likewise, rabbits will also dig out burrows underground to quickly escape from predators. This is why rabbits are often found in either forests with thick undergrowth or in prairies, underground.

Rabbit Speed Vs. Other Animals

Rabbits are not one of the fastest land animals, but they are definitely on the upper end of the chart. They can match the speeds of greyhounds and horses, as well as cats and dogs.

However, there are definitely animals that are faster than rabbits. These include the cheetah, with a recorded top speed of about 70 mph.

How To Measure a Rabbit’s Speed

You can conduct your own experiments to measure your rabbit’s speed. As one rabbit’s pace can greatly differ from another, it’s a great way to determine if your rabbit is faster or slower than the rest.

Measuring your rabbit’s speed with a stopwatch is the traditional approach. This requires a stopwatch, a yardstick, and a distance marker.

This method is the most accurate. However, it may not be very effective if your rabbit doesn’t know how to run on command. To try this method:

Rabbits aren’t exactly known for running to their owners on command. However, you can still measure your rabbit’s speed without having to do this. Instead, you can take a video of your rabbit to measure its speed.

This may be less accurate, so try to pair this method with the first. To measure your rabbit’s speed using video, do the following.

When measuring your rabbit’s speed, remember that it won’t likely reach its top speed. After all, a domesticated rabbit won’t have any reason to run like its life depends on it. Your rabbit will most likely reach an average speed of 20 mph.