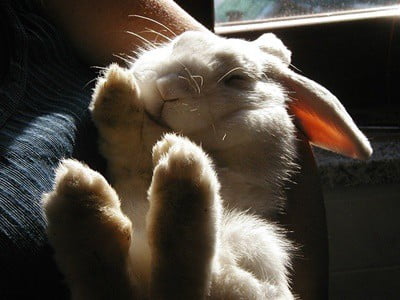 Rabbits display many kinds of jumping, spinning, and hopping behaviors. One of the most well-loved habits is the bunny flop. You may assume this is just a random action, with no meaning whatsoever. On the contrary, rabbits often flop over as a way to communicate, both with their owners and other rabbits. The act is even more important than binkying.

Bunny flopping, or the act of ‘flopping’ onto its side, is a form of expression. It shows contentment, relaxation, and feelings of security. If your bunny displays this habit in front of other rabbits, it can be a low-key, non-aggressive insult. With humans, the act of flopping may follow or precede a binky or other happy actions.

Bunnies are more likely to flop in calm, safe environments where they don’t feel threatened. If your healthy rabbit doesn’t flop around you, then it could need more bonding. Just keep an eye out for the sounds and gestures it makes as it flops, as these also have meaning. However, if your rabbit struggles to get up, doesn’t move, or displays signs of a seizure, that’s not bunny flopping. A collapsed rabbit will need medical attention.

What is Bunny Flopping?

A flop or bunny flop is the colloquial term. It’s used for the moment when a rabbit quickly drops (or ‘flops’) onto its side to lie in a prone position. This is sometimes called the ‘lamb chop,’ because of the shape of a rabbit’s body when it lies this way. Rabbits flop onto their sides like this when they are extremely happy and content. They also display it when they feel very safe and relaxed in their environment.

Of course, bunny flopping isn’t just your rabbit reacting to its feelings; it’s actually ‘talking.’ Rabbits may not seem expressive, since they don’t show ‘emotion’ on their face in the same way that humans do. However, they have their own methods of communication. Research completed for PLoS ONE found that rabbits mostly use full-body actions, like bunny flopping. These are paired with sounds like screaming or growling to effectively communicate happiness, anger, frustration, and pain.

So, really, a bunny flop is one of the main ways in which your rabbit talks to you. Other modes of communication for rabbits include:

Since bunny flops are meant to display emotion, rabbits may perform a bunny flop in different ways. They may twist their head from side to side before flinging the rest of their body down onto the ground. This may be preceded by:

When these signs come before a bunny flop, they give you a more specific idea of your rabbit’s feelings.

While lying on its side, your rabbit may also stretch out its legs and close its eyes. It may also let its eyes roll into its head a little to show the whites of its eyes. It does look a bit startling to those who don’t expect it.

Why Would A Rabbit Flop Onto Its Side?

It’s natural to wonder why a rabbit would expose its most vulnerable areas. After all, it’s a prey animal. The simplest answer is that rabbits flop over when they are:

Rabbits Flop Over To Insult Other Rabbits

Bunny flopping is a reaction to feelings of contentment. However, it can also be a way to taunt other rabbits. If your rabbit doesn’t like another bunny in its vicinity, but doesn’t feel the need to fight, it may flop as a minor insult.

By flopping over in the presence of another rabbit it dislikes, your rabbit could be saying: “Look how happy and relaxed I am. I don’t feel threatened by you. I’m having a good time.’

This isn’t a serious issue, however. Rather, it’s a game of “Look how much happier I am than you.” Rabbits will play this with each other when they have minor issues or agitations. This ostentatious display of happiness (as an underhand insult) is proof that rabbits communicate in complex and interesting ways.

After all, lying on its side is risky for a rabbit. In this position, a rabbit has:

Despite this, rabbits happily and voluntarily flop when they feel so compelled.

Why Does My Rabbit Flop Onto Its Back?

The average rabbit will not flop over onto its back, but some do. That’s because it’s a supercharged bunny flop. Since this position leaves the rabbit highly vulnerable, that’s a sign that it’s extremely trusting of you.

Unless the rabbit shows signs of pain, fear, or seizure, you should not worry. Your bunny is just happy and enjoying itself. However, there are some red flags to look out for. If your rabbit does any of the following, then it isn’t bunny flopping. It should be taken to the vet:

These are all signs that your rabbit is seriously ill or injured. Screaming, in particular, is something that rabbits only do when they are in intense pain. Likewise, being limp or floppy is a sign that they have fallen unconscious. Jerking, shaking, and drooling are signs of a seizure. None of these are signs of a happy, relaxed rabbit.

Will a Rabbit Flop When It Is Sick?

Bunnies that are seriously sick or dying may flop over. However, it looks very different from a happy bunny flop. When a rabbit is extremely ill or dying, it will first stop eating and drinking. When its condition becomes critical, it may flop over onto its side.

However, this won’t be a leisurely or comfortable “roll” onto its side. A sick rabbit will literally ‘flop’ or drop in a haphazard and sometimes dramatic fashion.

Unlike happy, contented bunnies, a sick rabbit will retain no tension in its body. If your rabbit:

Your rabbit has collapsed. If you see your rabbit collapsing, you must take it to the vet immediately. This is especially the case if it makes repeated grunting, squeaking, or screaming sounds.

Why Is My Rabbit Flopping More Than Usual?

Changes in a rabbit’s behavior can be disconcerting for new owners. However, there is usually nothing to be concerned about unless the new behaviors are aggressive. If you have recently adopted a rescue bunny, for example, you may notice that it begins to flop more often as it settles into your home. This is not only normal; it is a very positive sign that you are doing everything right.

After all, the behavior means your rabbit feels safer, happier, and more content in the environment that you have provided. Not only is it pleased with its home, but it’s comfortable enough to be vulnerable. As such, there is no such thing as too much bunny flopping in a healthy pet rabbit.

However, when should repeated flopping concern you? Only if your rabbit seems unsteady on its feet, or flops over again and again when it tries to stand. If this happens, it is a sign that there is a problem within the balance centers of your bunny’s brain.

If your rabbit seems unsteady on its feet, you should take it to the vet to check for underlying health issues. This may include Floppy Rabbit Syndrome (FRS), which may cause problems in the future.

What is Floppy Rabbit Syndrome (FRS)?

Floppy Rabbit Syndrome is an acute neurological condition. It causes weakness in the muscles of the legs and neck. As a result of this, rabbits can regularly flop onto their stomach or side. In fact, a rabbit which has FRS may struggle to stand or even lift its head. This floppiness around the neck area is a key warning sign.

As such, routine flopping could signify the onset of FRS. However, it’s unlikely that you could mistake the symptoms of FRS for genuine bunny flops. Bunny flops are:

When your rabbit does a bunny flop, it will generally do it in one or two familiar ways. More importantly, the rabbit will likely stand up if you disturb it or if its surroundings change drastically. It will look relaxed, but alert. By contrast, a collapse or flop caused by FRS will look:

If you suspect that your rabbit has FRS, take it to the vet immediately. Otherwise, just kick back and enjoy the fact that your bunny is so happy.

Why Doesn’t My Bunny Flop In Front Of Me?

If your rabbit won’t flop in front of you, it could mean three things:

If you want your rabbit to flop in front of you, try to socialize it more regularly. This will strengthen your bond and create an emotional attachment. After all, rabbits can and do connect with their owners emotionally. Yi-Fu Tuan, for example, found that house rabbits have genuine, emotional relationships with their owners. With that bond in place, your bunny will likely feel comfortable enough to flop in front of you.

We often think of hopping, or binkying, as one of the purest expressions of happiness that a rabbit can show. While it’s certainly a strong sign that a bunny is happy, nothing comes close to a bunny flop.

Other actions and sounds may signify that your rabbit is happy and healthy. However, a bunny flop shows that it is completely at ease. A willingness to expose the softest parts of the body is incredibly unusual in a prey animal. That’s especially true for animals like rabbits, which are very highly-strung.

So, if you manage to create an environment in which your bunny regularly flops? You have done everything right for it.

To rabbits, flops are just one way of saying “I’m happy.” When directed at other rabbits, it can also mean, “Look how much happier I am than you.” With other symptoms, it could signal illness, but these will be very obvious.

2 thoughts on “Why Does My Rabbit Flop Over? Bunny Flopping Meaning”